Stephen Elliot (James Franco; 127 Hours) is a bestselling writer with an over abundance of offers from publishers. While working on his next book, famous tech nerd Hans Reiser (Christian Slater, Mr. Robot) stands trial accused of murdering his wife and Stephen smells a great story. He meets another writer, Lana (Amber Heard, Machete Kills), also covering the story and they start up a relationship. He seems fascinated with her abused past that she doesn’t want to talk about, and starts to reminisce about his own past with his abusive father Neil (Ed Harris, Pollock), whom he has told everyone is dead. When his dad shows up at a book reading and humiliates his son, Stephen falls into a downward spiral of drugs, drinking and S&M. He finally goes to confront his father about his abuse, only to be shocked with  the truth about his selective memory.

THE GOOD: I like Jim Parrack’s character so much, I would much rather see his story than Stephen Elliot’s. If Stephen turned his life around and became Roger, that would’ve been a much more admirable story. The scenes where Elliot is with the dominatrices were fun.  James Franco is famous for method, and it actually looked real.

THE BAD: Like many biopics such as Rudy, this is a story that really doesn’t need to be told. They say there’s no small parts, but Wilmer Valderrama was maybe in the film for a total of 3 minutes and his character could’ve been played by anyone. There’s a few poorly written or executed scenes such as the scene where Stephen goes to the prison to speak with Hans to propose a book, and Hans says “Not interested,” and Stephen says, “Okay bye,” and he leaves. What the hell was that?

The special features include some pointless deleted scenes, a director’s perspective featurette and an audio commentary. Personally, I don’t feel these features are incentive to purchase the film.

Stephen Elliot is a self absorbed tool who was a terrible son to his poor father. Once the truth of his past was revealed, I had lost all interest in this film and felt duped into feeling any sympathy for Stephen.   If his novel The Adderall Diaries is his apology to his father, well I’d say it’s a start.

ACTING: B
STORY: C
TECHNICAL: B
TOTAL RATING: B
REVIEWED BY: JM Willis 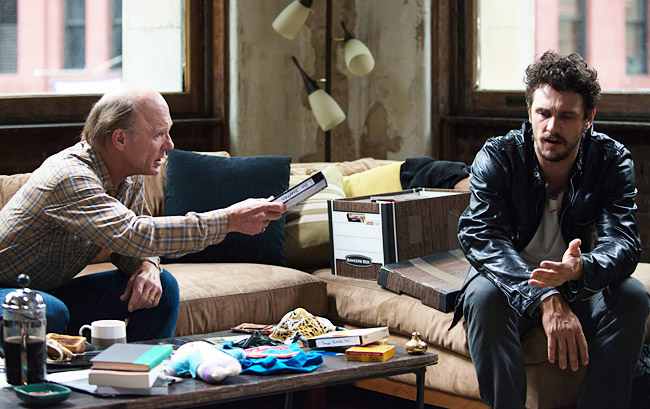