Some Americans seem so unproductive particularly in high-wage areas that demand 14 hours daily of an individual’s time, that our society should be thinking about how to make people do more in less time.  Thanks to the folks who made the movie “Equals” (director Drake Doremus’s 2010 comedy “Douchbag” hardly prepares us for a rigid drama like this new one), such a society exists.  Or it will exist at some indeterminate point.  In this dystopian sci-fi drama which would doubtless be considered a utopian experiment by its founders and officials, not only is sex forbidden, but from birth, all emotional life is drained from its citizens.  So if men are now able to stop thinking about sex every seven minutes, and men and women no longer spend time joking around the water cooler, voilá: production soars.  It also helps that in this (near) futuristic time, all communication is digital, which means that like America in 2016, nobody has to read books, magazines or newspapers.

You can readily see that given the digitalization of this group known as The Collective, people act more mechanically than most of us are today.  They walk, they talk, they act not quite like robots: you can still see some humanity.  And like in other dystopian utopias, most but not all are happy.  Recall for example, in the far superior movie “Fahrenheit 451,” only a small group break away from the organization to memorize books rather than give themselves over to see a big brother on the screen, and in “Logan’s Run,” since people are evaporated at age thirty, nobody has time to get old and talk about their operations.

There are flaws: “Equals” is not perfect even in the opinion of its founders and officers because the emotional drain that affects everyone at birth can slowly reverse.  People at stage one of this “disease” start feeling urges, and even before the final stage four when individuals becomes just like us, the governors encourage them to commit suicide.  However, not all is lost.  A promised cure emerges that allows people infected with emotions like libidinous urges, can get injected and returne to the stage of unemotional workers.

The couple on whom the movie focuses, Silas (Nicholas Hoult) and Nia (the ubiquitous Kristen Stewart), at first talk about their work.  He is an artist drawing pictures for the oxymoronic “speculative nonfiction,” and she dictates for the features. As Silas goes into stage one, his drawings become surreal.  He’s mannequin-handsome, which means that soon Nia and he will take breaks, hide out from the government, and embrace, and then some. They are determined to keep their humanity. With the help of rebels like Bess (Jacki Weaver) and Jonas (Guy Pearce in an amazingly small and modulated role), they plan an escape by train to a less sci-fi society.

The trouble with the whole film is that most of it has us staring at people who are rigid—except where rigidity is considered a good thing as in our own world—and that’s hardly able to jog our own emotions.  Nor is it much help when the film changes colors according to the emotional levels of its people: blue for futuristic and red for passionate.  The motifs are laid out simplistically, overly worked out, including its formulaic trajectory.  Still the architecture is amazing.  The cast and crew were able to enjoy a free trip to Japan’s Awaji Island, Niigata, Osaka, Shiga and Tokyo and also walk over a bridge in Singapore. 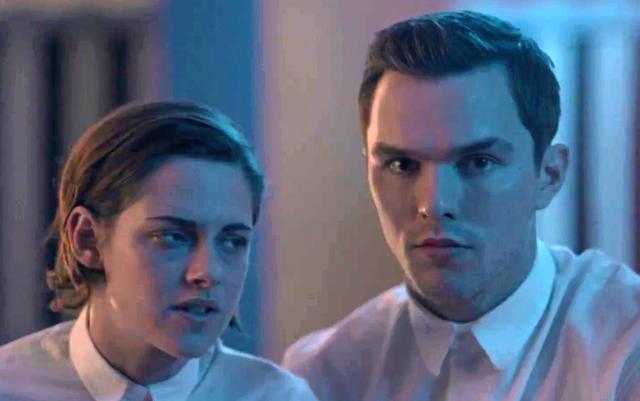