In adapting Liz Jensen’s popular 2008 novel, director Alexandre Aja and scripter Max Minghella stick closely to the book, changing a name or two (Dr. Allan Pascal in the novel was Dr. Pascal Dannachet), giving the film an intriguing Hitchcockian look.  In fact at many times during the 108-minute film, you could get the idea that it came out of the 1950’s or 1960’s, especially “Vertigo” (which is considered by some to be the greatest movie of all time.)  “The 9th Life of Louis Drax” does not have to worry about being treated like one of the hundred classics of forever, but there is quite a lot to like even if the performance of handsome Jamie Dornan is on the wooden side.

Though the star is 12-year-old Aiden Longworth as the title character Louis Drax, this is in no way a movie for kids.  Vancouver-born Longworth enjoys his first major role in a full-length movie as an adorable and gifted nine-year-old, his blond hair-over-the-forehead giving him the air of a character in “Harry Potter,” which is suitable enough given that much of “The 9th Life” has supernatural overtones—such as the idea that a kid in a coma can narrate much that is descriptive, featuring a monster that rises out of the floor covered in sludge.

Louis Drax is both lucky and unfortunate; lucky for surviving eight mishaps but not so in winding up in a coma with wires covering his head.  He is far from the typical nine-year-old, his gifted qualities muted by his inability to fit in, the absence of friends, and alarmingly his action in killing his pet hamsters with an heavy medical book whenever they reach the age of two.  “Wacko boy,” the sobriquet given him by his classmates, is appropriate enough.  His father, Peter Drax (Aaron Paul) sends him to a shrink, Dr. Perez (Oliver Platt), the boy’s comedic and insightful commentary to the doctor including the likes of “it must be nice to sit in a chair and talk and live the good life.”

Though Louis has survived mishaps like being electrocuted, poisoned, and crushed by a falling chandelier, his most spectacular one, his ninth, finds him falling (or being pushed) from a cliff after which his father, sought for murder, disappears as well.  Louis is left in the care of his mother, Natalie (Sarah Gadon), Dr. Allan Pascal (Jamie Dornan) and later his grandmother, Violet (Barbara Hershey). Much of the story involves a romance between the good doctor and Louis’ mother, the two devoting all their time to the care of the comatose boy.  In fact Dr. Pascal seems to have a lot of time on his hands, walking in the woods with the mom, giving her a staff lounge in the hospital for sleeping, reading to the patient.  But don’t think that Louis’ performance consists simply of lying in bed throughout the story, as he has an active dream life which burrows forward and backward to highlight key points in his life.  He shows deep love for his father throughout.

“The 9th Life of Louis Drax” features young Aiden Longworth’s spot-on performance and showcases gothic twists and turns with a revelation toward the conclusion that you may or may not guess, but it’s a zinger. 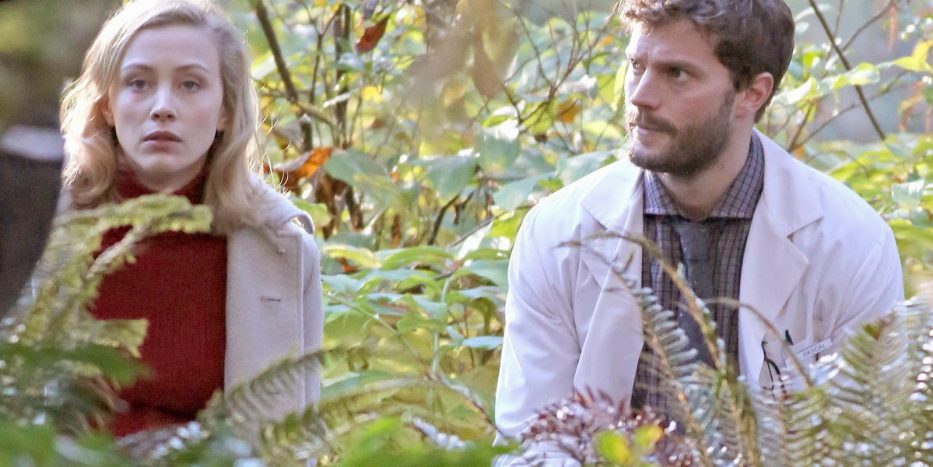