François Ozon’s ‘Frantz’ will take you by surprise. It is far from banal. The relationships that are established throughout the story are nuanced with the complications, the regrets and the unrequitedness of reality.

The story is set in a small German town after World War I, where Anna (Paula Beer) mourns daily at the grave of her fiancé Frantz (Anton Von Lucke), killed in battle in France. One day a young Frenchman, Adrien (Pierre Niney), also lays flowers at the grave. His presence so soon after the German defeat ignites passions.

The main theme of the movie is the way we deal with lies, that was rooted in a play written by Maurice Rostand, right after World War I, and was adapted for the silver screen in 1931 by Ernst Lubitsch under the title ‘Broken Lullaby.’

In the play and the Lubitsch film, the lie is never revealed to Frantz’s parents and the Frenchman is accepted into the family. He takes the place of the dead son, plays violin for them, and the ending is a happy one. In Ozon’s film we get to follow the perspective of Anna, the way she accepts Adrien’s lie after a long personal journey, and becomes unexpectedly attached to the French young man.

The sentimental education of this young woman is a true cinematic Bildungsroman. Anna has grieved for a lost love and an imaginary love, as the film traverses many themes. Grief and ambiguity intertwine around this absent presence. This dead man, almost like the Hitchcockian “first wife” Rebecca, influences the lives of his loved ones more then he ever did when he was alive.

This is epitomised with Ozon’s playful visual depiction. The black and white flick turns to colors when the characters can detach themselves from the phantom of ‘Frantz.’ Colour thusly becomes a dramatic element in flashbacks and certain scenes of lying or happiness, to suggest life bleeding back into this gray period of mourning. Just like all of Ozon’s characters, also the ones in this First World War setting find escape in the arts, give the Stockholm Syndrome a peace of mind connotation. 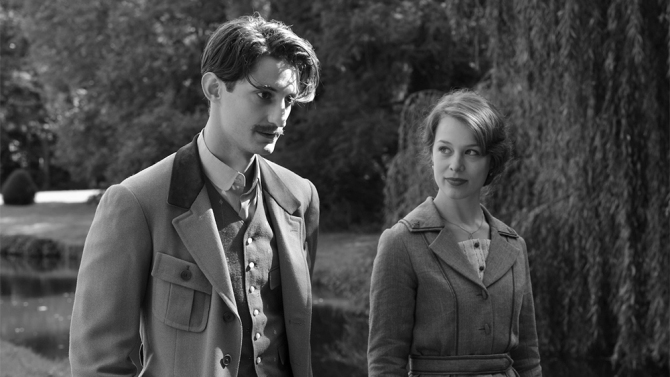