‘In Dubious Battle’ is a novel written by John Steinbeck in 1936, that recounts a fruit worker strike that occurred in Tulare County, California, in 1933. The central figure of the story is an activist who organises a major strike by fruit pickers, seeking thus to attract followers to his cause.

“The Last Unicorn” (as Marina Abramovic defined polymath James Franco) has always had a passion for Steinbeck, interpreting ‘Of Mice And Men’ on Broadway and taking part in the documentary that explores the legacy and meanings of John Steinbeck’s realist novel ‘The Grapes of Wrath.’ James Franco grew up in California, near the hometown of the American author, and began reading his novels at a very young age, making Steinbeck part of the fabric of his childhood.

It is understandable how he takes on his themes and language so brilliantly, and adapts them for a contemporary audience, preserving the authenticity of their historical context.

‘In Dubious Battle’ — the title of which is a reference to a passage from John Milton’s ‘Paradise Lost’ — marks Steinbeck’s supreme interest in what happens to men’s minds and hearts when they function not as responsible, self-governing individuals, but as members of a group.

In the California apple country nine hundred migratory workers rise up against the landowners after getting paid a faction of the wages they were promised. The group takes on a life of its own — stronger than its individual members and more frightening. Led by Jim Nolan (Nat Wolff) and Mac McLeod (James Franco), the strike is founded on tragic idealism — on the “courage never to submit or yield.”

The film boasts a cast of first class actors such as Sam Shepard, Robert Duvall, Vincent D’Onofrio and Ed Harris who deliver some of the best performances of their careers. James Franco does a terrific job both as an actor and director.

The film is visually powerful with scenes of the strikers marching, that evoke the painting ‘The Path of Workers’ also known as ‘The Fourth Estate,’ made by Giuseppe Pellizza da Volpedo in 1901. That picture not only depicts a scene of social life — a strike — it is a symbol, where people are given equal space as shown by a woman with a baby in her arms walking alongside men. In the same manner ‘In Dubious Battle’ is a remarkable portrait that shows the unity of the genders in fighting for their rights. 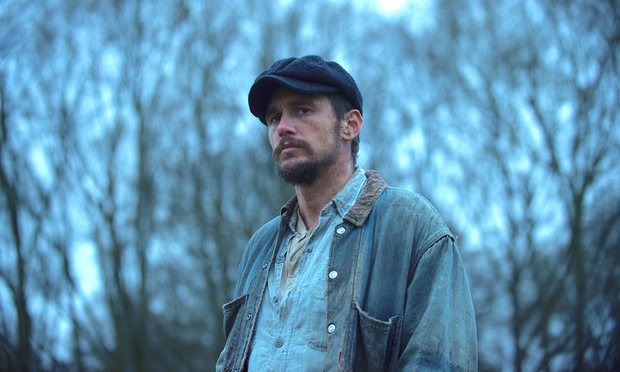