“Mia Madre” is the kind of film to which many in the audience can relate, particularly those of a certain age who have lived through the death of a parent, or, if younger, through the demise of a grandparent.   Some of us may have even been entertained at a eulogy in which a speaker, instead of simply moaning and crying, describes some of the funny things that took place between him and the deceased.   Nanni Moretti’s is that kind of film: hilarious at times, at other times mournful, and always entertaining.  This is a wonderful movie that can bring tears to your eyes and summon up memories of sad events, while at the same time evoking laughter.  “You’ll laugh, you’ll cry,” the stereotypical comment that people make when advising others to see what they have seen, is applicable, though there is nothing so hackneyed in “Mia Madre” as that comment.

Nanni Moretti, whose “Habemum Papam” is a delightful dramady about a pope who wanted to lose his election and who seeks out a therapist, and whose “The Son’s Room,” a sad, sad tale of a psychoanalyst and his family who grieve over a son who died in a scuba-diving accident, finds this kind of film right up his alley.  A handsome fellow, he even has a major role in his current work as the brother of a director, with some major autobiographical import as he suffered through the trauma of his own mother’s death while he was shooting “Habemus Papam.

Margherita (Margherita Buy) in an excellent performance evoking audience tears and understanding is busy on several levels.  She is trying to film a movie using an American actor, Barry Huggins (John Turturro), who plays a factor owner in this anti-capitalist film, noting that 1/3 of the workforce must be laid off.  The workers don’t take “no” for an answer.  In a dramatic scene near the opening, they chant as a large group, attack the police, and some scale the walls of the factory for a sit-in.  Huggins regularly messes up his lines, perhaps because as an American, his Italian is not fluent.  He must speaks often in English.  He is the Donald Trump of “Mia Madre,” never blaming himself for his failures and, like Trump, he provides much of the story’s entertainment.

Meanwhile Margherita, who regularly yells at the actors and crew, is having a hard time caring for her dying, hospitalized mother, Ada (Giulia Lazzarini), a retired classics teacher who gives homework help to her teen granddaughter, Livia (Beatrice Mancini).  Her brother, Giovanni (Nanni Moretti, the director) has taken a leave from his job as engineer to take care of his mother, a frail woman who has lost none of her intelligence and is bored by the hackneyed conversations of the hospital staff and some of her visitors.

We have two terrific roles for the audience to enjoy.  The over-the-top Turturro will appeal to our need for comic gestures and conversation, while the absolutely excellent Margherita Buy will touch our hearts as she moves through middle age frustrated with the way the film is going and feeling guilty for not spending more time with her mother.

“Mia Madre” is filmed in Rome and Lazio, Italy and serves as meta-cinema, i.e. a movie about the making of a movie.  A gem. 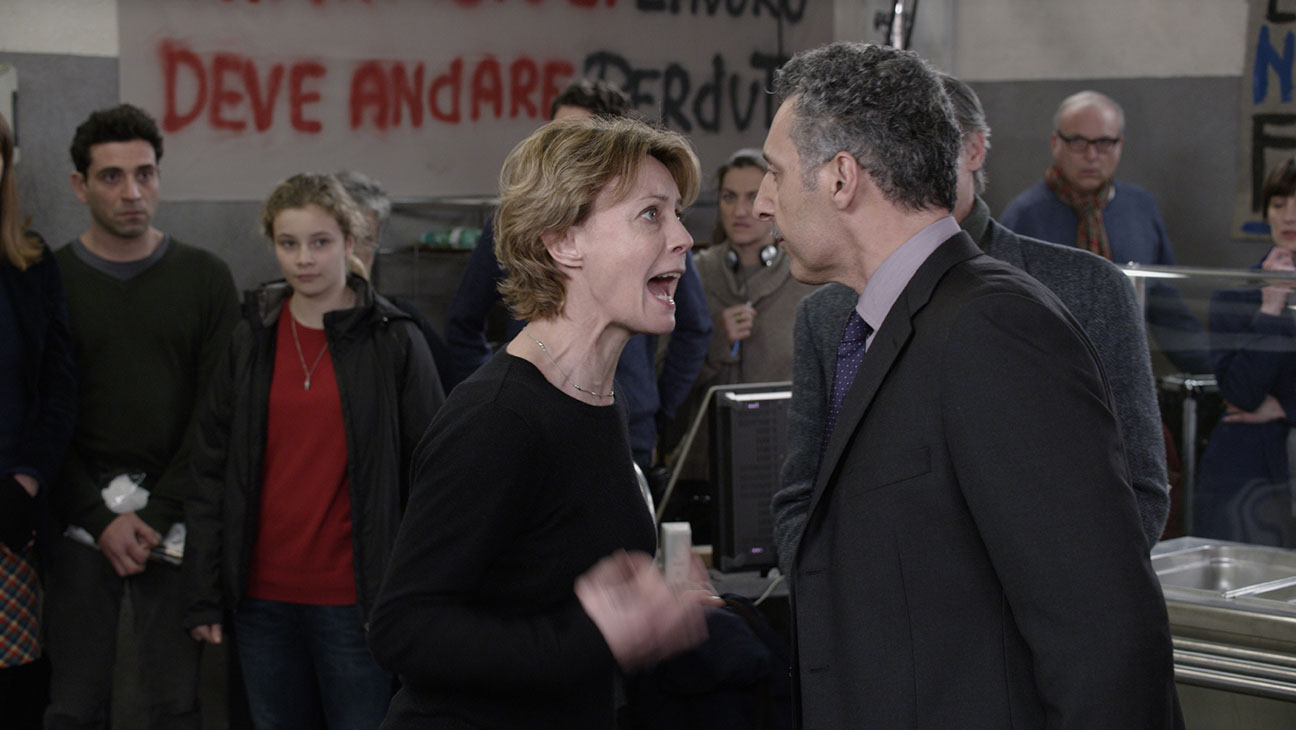