Convincing audiences to believe the magic that’s presented in front of them is a challenging process for any entertainer. Translating those illusions to the screen for an action-adventure film can be even trickier. In honor of this summer’s hit heist movie, ‘Now You See Me 2,’ being distributed on home entertainment, Shockya has an exclusive clip from the bonus features of the sequel.

In the clip, which is titled ‘Filming the Magic,’ the comedy’s screenwriter, Ed Solomon, noted that process of adapting the magic tricks onto the screen was at times difficult. The scribe, who also contributed to the script for the 2013 original film, also mentioned that creating the mood of magic, so that the whole movie works like a big magic trick, was also an important part of his job.

Illusionist David Copperfield, who served as a co-producer on the follow-up, also appears in ‘Filming the Magic.’ He mentioned that how the story is presented, as well as how the film is lit, are also essential elements to helping the audience feel as though they’re watching the magic tricks live.

Jesse Eisenberg, who plays J. Daniel Atlas, one of the four magicians in the action-adventure series, also appears in the exclusive clip. The actor noted that he values the importance of performing tricks practically on the set, as opposed to digitally adding them during post-production. He feels viewers become more engaged in the story-line of such an action-driven story when stunts are performed by the actors on the set.

In addition to Eisenberg, the adventure sequel also stars Woody Harrelson, Dave Franco, Lizzy Caplan as the other three magicians, as well as Mark Ruffalo, Daniel Radcliffe, Jay Chou, Sanaa Lathan, Michael Caine and Morgan Freeman. Summit Entertainment has released the following synopsis for the film, which was directed by Jon M. Chu:

The Four Horsemen (Eisenberg, Harrelson, Franco and Caplan) return for a second mind-bending adventure, elevating the limits of stage illusion to new heights and taking them around the globe. One year after outwitting the FBI and winning the public’s adulation with their Robin Hood-style magic spectacles, the illusionists resurface for a comeback performance in hopes of exposing the unethical practices of a tech magnate. The man behind their vanishing act is none other than Walter Mabry (Radcliffe), a tech prodigy who threatens the Horsemen into pulling off their most impossible heist yet. Their only hope is to perform one last unprecedented stunt to clear their names and reveal the mastermind behind it all.

The ‘Now You See Me 2’ Blu-ray Combo Pack and Digital HD release include audio commentary by the director, as well as three behind-the-scenes featurettes,including ‘The Art of the Ensemble, ‘You Can’t Look Away’ and ‘Bringing Magic to Life, which look at the creation of the magic in the movie. It also features discussions with the cast and crew about their work in developing and mastering the magic tricks seen in the film. The ‘Now You See Me 2’ DVD will include audio commentary with the director and the ‘You Can’t Look Away’ featurette.

For more information on ‘Now You See Me 2,’ visit the adventure comedy’s official website, as well as its Facebook, Twitter and Instagram pages. Watch ‘Filming the Magic,’ Shockya’s exclusive clip from the bonus features of the follow-up, below. 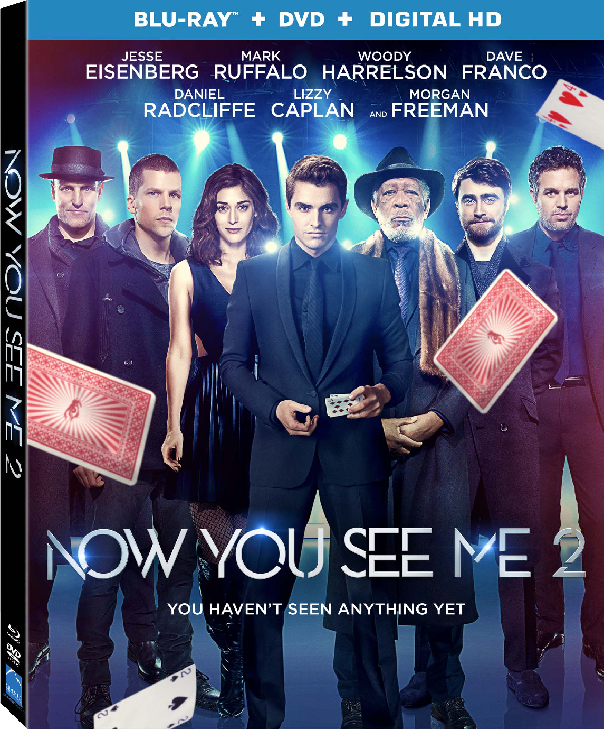