Retirement is a time many adults eagerly anticipate, as they feel they’ll finally be able to lead the luxurious life they have always desired. But what’s expected to be a serene period for two best friends actually turns into a chaotic adventure, as they’re forced to evade the police when they become instant celebrities. The companions’ unexpected exploit is chronicled in the new comedy-drama, ‘Wild Oats.’

The action film was helmed by Andy Tennant, who has garnered acclaim for directing such movies as ‘Hitch’ and ‘Sweet Home Alabama.’ His latest comedy-drama, which was written by Gary Kanew and Claudia Myers, will be distributed on DVD by Anchor Bay Entertainment this Tuesday, October 4, for the suggested retail price of $19.98. ‘Wild Oats’ will also be unveiled on Digital HD and On Demand on the same day. The film features Academy Award winners Shirley MacLaine and Jessica Lange as the two best friends, as well as Billy Connelly and Demi Moore.

In celebration of ‘Wild Oats’ home release, Shockya is offering one Gran Prize winner a DVD of the comedy, as well as a copy of MacLaine’s paperback book, ‘Above the Line: My Wild Oats Adventure.’ One runner up will also receive a copy of the DVD. To enter, email us at ShockyaGiveaway@aol.com. Let us know that you’re entering to win the ‘Wild Oats’ contest in the email’s subject line and message. You have until next Tuesday, October 4 to enter, and you can enter the contest once daily. After October 4, we’ll pick the winners at random and notify them through email. Good luck!

Eva (MacLaine), a widow and retired history teacher, enjoys a quiet life. Everything changes when she receives a life insurance check accidentally made out for $5,000,000 instead of the expected $50,000. At the not-so-gentle urging her best friend Maddie (Lange), Eva deposits the money and the two friends head to the Canary Islands with every intention of living it up. But their fantasy is short-lived when they discover that they have become media sensations overnight. Fugitives from justice, the two are forced to outwit a trio of conmen, led by the local wine warlord, Carlos (Santiago Segura); outmaneuver a dogged life insurance agent, Vespucci (Howard Hesseman), who has teamed up with Eva’s daughter, Crystal (Moore), and outrun the law. What they don’t expect is to be good at it.

Check out the DVD cover for ‘Wild Oats’ below 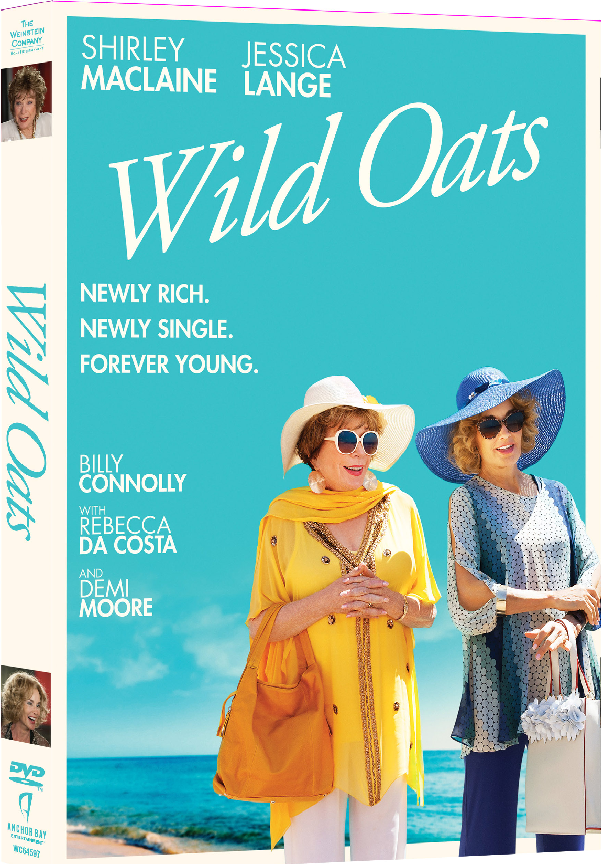