Join Willie for last call in the new poster from the anticipated sequel, ‘Bad Santa 2.’ The upcoming comedy features returning star Billy Bob Thornton as the title character, who’s up to his usual antics in the poster.

In addition to the Academy Award-winning actor, ‘Bad Santa 2’ also features Tony Cox and Brett Kelly, who are also reprising their roles from the hit 2003 original film. Kathy Bates and Christina Hendricks are among the new additions to the cast of the follow-up, which will be released in theaters by Broad Green Pictures on November 23.

‘Bad Santa 2’ follows America’s favorite anti-hero, Willie Soke, who’s played by Thornton. Fueled by cheap whiskey, greed and hatred, Willie teams up once again with his angry sidekick, Marcus, who’s portrayed by Cox, to knock off a Chicago charity on Christmas Eve. Along for the ride is ‘the kid,’ the cheery Thurman Merman, who’s played by Kelly, and brings out Willie’s sliver of humanity.

Mommy issues arise when the trio is joined by Willie’s horror story of a mother, Sunny Soke, who’s portrayed by Bates. Sunny raises the bar for the gang’s ambitions, while somehow lowering the standards of criminal behavior. Willie is further burdened by lusting after the curvaceous and prim Diane, who’s played by Hendricks. Diane is the charity’s director, and has a heart of gold and libido of steel.

Check out the new poster, and watch the official green band trailer, for ‘Bad Santa 2’ below. For more information on the comedy sequel, visit its official website, as well as its Facebook, Twitter and Instagram pages. 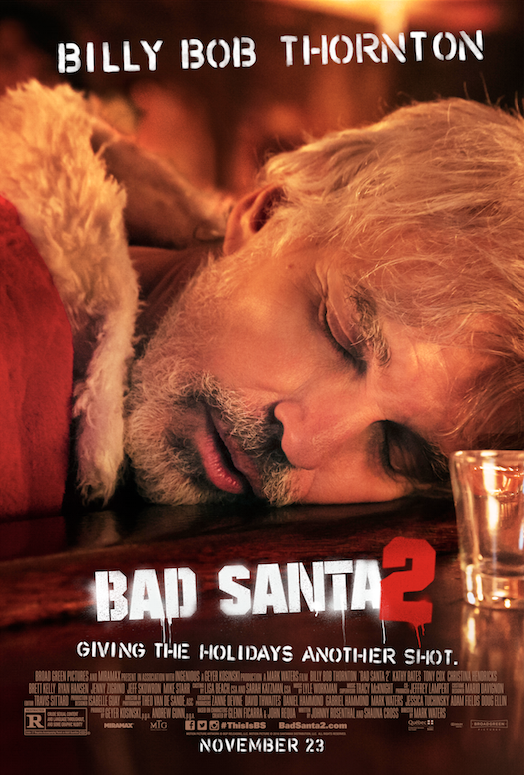