Of all the hideous quotes from Donald Trump during the overlong campaign for the presidency, his statement about Senator McCain is arguably the vilest.  “He’s not a war hero,” said Trump in July of 2015. “He was a war hero because he was captured. I like people who weren’t captured.” Trump, who avoided the military draft because of a “heel spur” and did nothing in his life that could compare to McCain’s heroism, shows no understanding of the horrors of war.  McCain spent five years in a cage in Vietnam, refusing to be freed until all his buddies were likewise liberated.  If you want proof that war is hell, think of McCain’s brutal imprisonment.

Now, “Hacksaw Ridge” is not about the Vietnam War, and no senator or prisoner of war is cited.  But the Japanese island of Okinawa in May 1945 as directed in that film by Mel Gibson should be required viewing by people like Trump, though one suspects not even the missiles fired from U.S. naval vessels, not the incessant barking of the machine guns, the more targeted shots of the rifles, the lobbing of grenades, and most horrifically the use of flamethrowers (thankfully all by our own soldiers) would phase the billionaire businessman.  But be assured: if you’re this side of normal, you will be impressed.  War is not a computer game, a video match, a fun experience in any way.  It’s the worst horror imaginable. With the help of modern movie technology, Gibson captures what goes into the taking of a single ridge in Okinawa, a gateway to the mainland of Japan, “Hacksaw Ridge” takes its place among the greatest of the genre.  Not even the opening scene of D-Day in the marvelous “Saving of Private Ryan” can hold a candle to the three or four full-scale engagements of American soldiers vs. Japanese counterparts.

Nor does the movie lack a smart narrative with incisive dialogue, courtesy of screenwriters Robert Schenkkan and Andrew Knight.  Thematically, “Hacksaw Ridge” tackles the concept of conscientious objection, a plea by a small segment of the American population that holds that religious or moral principles preclude killing others.  In other words, the commandment “Thou shalt not kill” means exactly that, despite the army’s position that there is difference between murder and self defense.  The central character Desmond Doss (Andrew Garfield) is a Seventh Day Adventist who honors the Sabbath on Saturday.  He is vegetarian like most of his religious cohorts, and he does not use the excuse of c.o. to escape the fighting.  In fact, as he watches his buddies sign up, volunteering to fight after the dishonor of Pearl Harbor, he insists on volunteering himself.  Trouble comes for this pacifist when he is bullied not only by drill sergeant Howell (Vince Vaughn) and by the unit’s Captain Glover (Sam Worthington), but even more by the men in his unit who in one situation pummel him almost to death.

Glover wants him out, sent home on a psychiatric deferment, and pressures the sergeant to turn the screws.  What mystifies everyone is how Desmond Doss refuses to plead guilty in a court martial but insists on going into the heat of battle as a medic while at the same time refusing even to touch a rifle.  His moral code derives not only from his religion but the treatment he receives from his father, Tom Doss (Hugo Weaving) who in one scene seems ready to shoot his wife Bertha (Rachel Griffith) until disarmed by the young man.  Nor can Desmond live down one incident in which, during a fight with his brother, he smashes the boy’s head with a brick.

This is Mel Gibson’s first entry in the director’s chair since “Apocalypto” a decade ago, a blood and guts treatment of Mayan adventure.  In a like vein, the ridge of the movie’s title can be compared, though a stretch, with a Mayan pyramid as the mud and foxholes are in the service of taking a one-hundred foot cliff.  The mayhem is startling: literally hundreds of soldiers on both sides have limbs torn apart by grenades, or bodies burned alive and to a crisp by flamethrowers.  Some are bayoneted during hand-to-hand combat, and one scene shows a Japanese unit raising a white flag and coming out with hands up only to fling grenades at the too-trusting Americans.

This is based on a true story of the first conscientious objector ever to win the nation’s highest military award, the Medal of Honor, pinned on the soldier by President Harry Truman.  The decoration was based on Doss’s saving of seventy-five American lives by dragging the wounded to safety, saving their lives with tourniquets and relieving their pain with morphine.  In the film’s warmest moment, the captain who wanted Doss to be thrown out admits ultimately that he had the man’s character all wrong.

Teresa Palmer serves in the movie’s only major female role as Dorothy Schutte, a nurse who is Doss’s love interest and later his wife.

Andrew Garfield was meant for the role.  Best known particularly by youthful cineastes for his title roles in Peter Parker’s two Spider Man movies, he appeared as well in less commercial but extraordinary fare in “99 Homes” (about efforts of banks to foreclose on residential property and “The Social Network” (about the founding of Facebook).

The action was filmed in New South Wales, Australia. 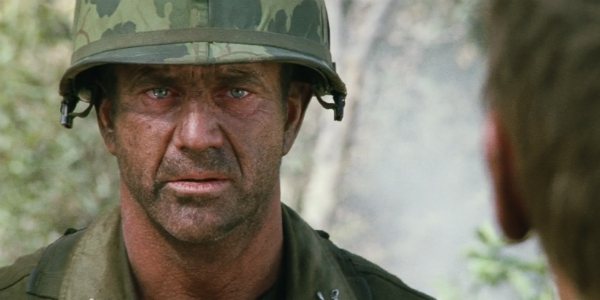