Women behold some of the most fascinating emotional abilities that allow them to survive the most traumatic situations. Even when their subconscious is threatening to break down their mentalities as they try to survive a harrowing situation, women possess the strength to rise about what’s plaguing their morals. That’s certainly the case with the protagonist in the new thriller, ‘Shut In,’ which was directed by Farren Blackburn.

Told through the stunning feminine insight of writer Christina Hodson, the drama follows its lead character, who is played by the enthralling Naomi Watts, as she battles her vulnerabilities, which are taunting her through her nightmares. Audiences can now witness as her formerly picturesque world begins to fragment through some of the creepiest dreams to ever be shown in film, as the drama was released in theaters nationwide this weekend by EuropaCorp USA.

‘Shut In’ follows child psychologist Mary Portman (Watts), whose husband died in a head-on car crash as he was driving his troubled teenage son, Stephen (Charlie Heaton), to boarding school. The married couple no longer know how to care for Stephen, who’s constantly angry at everyone around him and was expelled from his former high school. Mary feels guilty about her inability to use her professional skills to help her stepson contend with his emotions.

After Stephen is severely injured in the accident that killed his father, Mary decides to care for him in their remote New England country home, where she also works in her office in an adjacent outbuilding. Besides from working, much of Mary’s time is spent caring for her stepson, who was left brain-damaged and in a somewhat vegetative state in the accident. Besides tending to Stephen, Mary also becomes concerned for one of her patients, Tom (Jacob Tremblay). The young boy, who is deaf, is having trouble trusting his doctor and the rest of the adults in his life. The psychologist becomes increasingly concerned about Tom when he mysteriously goes missing during a harsh winter storm.

The community soon begins to fear that Tom died in the snow storm, leaving Mary’s guilt over not being able to adequately care for the people in her life to grow even deeper. Stricken with increasing remorse, the doctor begins to have troubling dreams about Tom’s disappearance. Experiencing the nightmares leads her to believe that the strange sounds she hears during the night can be attributed to his ghost haunting her and Stephen.

Between her disconcerting dreams and the pressure of being her stepson’s sole caregiver, Mary begins to confide in her friend and mentor, Dr. Wilson (Oliver Platt). The protagonist’s fellow psychologist tries to convince her that she’s just imagining the sounds that are plaguing her, and tries to guide her back to stability. As she realizes that she’s losing control over her emotions and sense of reality, she accepts her friend’s help to work on finding, and ultimately stopping, the forces that are overtaking her life.

‘Shut In’ is a fascinating and unique exploration into how the psyche of even the most logical and sensible person can became emotionally unhinged after they live through a dramatic and life-altering experience. Mary is the epitome of a strong woman who’s successfully able to balance her professional and family lives, even in the most dire of situations. So when she feels as though she has lost control of even one element of her life, specifically the inability to maintain the energy of taking care of her stepson after his accident, she becomes haunted by her self-perceived inadequacy. That inefficiency powerfully manifests into the doctor’s subconscious even further when she begins to feel responsible for Tom’s disappearance after he visits her office.

Blackburn grippingly understood Hodson’s belief that the drama’s subtle dramatic emotional elements that Mary is experiencing should be emphasized on screen, instead of the typical genre jump scares. Since the thriller’s primarily set at Mary and Stephen’s remote home and its surrounding property, the absence of jump scares is smartly replaced by the psychologist’s increasingly creepy dreams.

In her nightmares, Mary is plagued by her maternal instinct to want to protect her stepson and help her young patient, which becomes increasingly at odds with her growing resentment that they don’t fit into society’s definition of the perfect children. Blackburn’s stunningly visual directorial style helps highlight the doctor’s ever-evolving cynicism, which grippingly conflicts with her need to help cure those children who are experiencing their own difficulties.

One stand-out dream sequence features Mary finally giving into her subconscious wish of no longer having to solely care for Stephen, and drowns him in the bathtub while she helps him bathe following the accident. Upon waking up, the doctor immediately feels guilty for wishing harm on her stepson in her dream, and ponders what’s happening to her. She starts to realize that her mind has become fragmented following the car crash, since she has become completely consumed with caring for her stepson. The psychologist has completely shut down emotionally, but is still able to realize through her dreams that she’s no longer able to provide for him on her own. The resentment of how her life has changed since her husband’s death has finally manifested in her mind, particularly through her dreams.

Mary’s increasingly distressing and shocking nightmares are also powerfully fueled by the fact that she’s dealing with survivor’s guilt. She decided not to accompany her husband to drop Stephen off at his new boarding school, and instead said goodbye to him at their home. Not only does she regret not being hurt in the accident with her family, after she helped her husband decide to send their son to a new school, she’s also repenting over the fact that she now feels more maternally connected to her patient.

The remorse Mary feels about wanting to protect Tom, even if it comes at the suspense of Stephen’s health, is a key subject she discusses with Dr. Wilson. She mentions to her colleague that she feels as though she’s losing touch with reality following Tom’s disappearance. He initially tries to persuade her that the unexplained visions she’s having, and the noises she’s hearing, are simply nightmares, which are the results of her exhaustion. Mary’s supervisor feels as though she’s transferring her trauma into the forefront of her mind while she’s sleeping, and discussing the dreams can help her therapeutically. As her demons are playing out in her mind, both while she’s sleeping and while she’s awake, Dr. Wilson is helping Mary recognize, and work through, her vulnerabilities.

‘Shut In’ is a tantalizing exploration into how people’s homes are supposed to make them feel safe, protected and comfortable, even during their most troubling times. But Blackburn cleverly brought Mary’s vulnerabilities to life throughout the thriller, showing how the more she cares for Stephen, the more isolated she becomes from society and reality. What’s meant to serve as a serene environment has become increasingly claustrophobic for Mary, as her home has influenced her dreams to show her the more sinister and threatening aspects of life.

The horror thriller thrives on Mary’s shocking dreams, as they’re a main contributor to her formerly idyllic world beginning to fragment. While the psychologist’s life is closing in around her and creating a heightened reality, she realizes that she has to garner the strength to fight back against what she’s dreaming. That courage is the key she must use to reclaim her life, and only embrace the changes and situations that will make her a better person.

Watch the official trailer for ‘Shut In’ below. 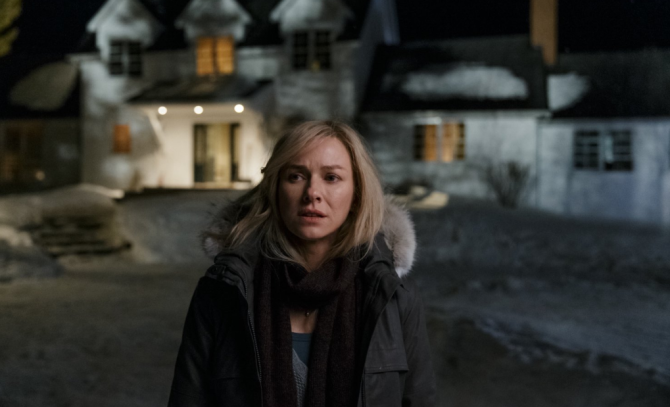