We in the audience presumably like to cheer the good guys, whether in politics or family relations, but we’ve come a long way from the great but naïve movies like “Mr. Smith Goes to Washington.” In that 1939 picture, director Frank Capra positions James Stewart’s character, Jefferson Smith, an innocent gent, to fill a Senate vacancy with the thought by corrupt politicians that he can easily be manipulated. Smith turns the tables on them to the presumed joy of the audience watching the Oscar-winning picture.  Nowadays we don’t believe that virginal people become legislators or presidents, nor does director John Madden, whose “Miss Sloane” features the remarkable Jessica Chastain in the role of the country’s best lobbyist.

(For those who were absent in civics class on the day lobbyists were discussed, they are the people hired by corporations to represent their interests in legislative halls.  They meet with politicians with the goal of persuading them to pass laws (or reject them) for the benefit of the clients.  Many politicians become lobbyists when they retire, making triple what they earned during their legislative careers.)

Elizabeth Sloane (Jessica Chastain) is known as the best in the business.  She has the drive, the knowledge, the stamina to haunt the halls of Congress for her employers.  She pops uppers as though they were tic tacs in order to work around the clock rather than sleep.  She’s too busy for romance.  For intimacy, she hires handsome Forde (Jake Lacy) as an “escort” a man who has the freedom to enter her apartment on appointed days and greet his client when she opens the door. The company lucky enough to have her on the staff is one headed by two venal men, George Dupont (Sam Waterston) and Pat Connors (Michael Stuhlbarg), who have a lucrative contract with the gun people.  Their aim is to head off legislation that would require more regulations on prospective gun buyers.

Because she has ideals, however, she bolts from that group together with four others and joins an anti-gun lobby company run by Rodolfo Schmidt (Mark Strong). In this position, she exploits a survivor of a school shooting, Esme Manucharian (Gugu Mbatha-Raw) to move her agenda forward. But because she had recently violated a section of the law that forbids lobbyists from sending people on expensive junkets (something about paying a congressman to go on an “educational” tour of Indonesia regarding taxes on palm oil), she is called up for a Senate hearing led by Senator Ron M. Sperling (John Lithgow), who is in the pocket of the gun people and seeks to send her to a federal penitentiary.

Monologues and passing statements from Elizabeth Sloane form the moral anchor of the film, though there is some difficulty in understanding Sloane’s motive.  She claims that she is more interested in winning than in the ethics of the groups she represents.  Why, then, would she give up employment in the company that resists more gun legislation to take on a firm with an uphill climb to convince Congress?  Toward the conclusion of the story, she transmits a blistering monologue which, if you go along with the premises of screenwriter Jonathan Perera would virtually bring down the dome of the capitol building by exposing links between legislators and corporations.

Few others could perform in this particular role like Jessica Chastain, who is everywhere on the screen, fast-talking, fast-walking, mowing down everything in her path that threatens to stop her momentum.  This is a smart film that arrives in theaters just about the time that the Electoral College will vote a disastrous choice by mandate of “the people,” putting in office a man that received only 27% of the votes of those who were eligible to cast ballots and who will take his place in the White House because forty-three percent of registered voters stayed home on Election Day (or went to a bar, or pool hall or whatever.) 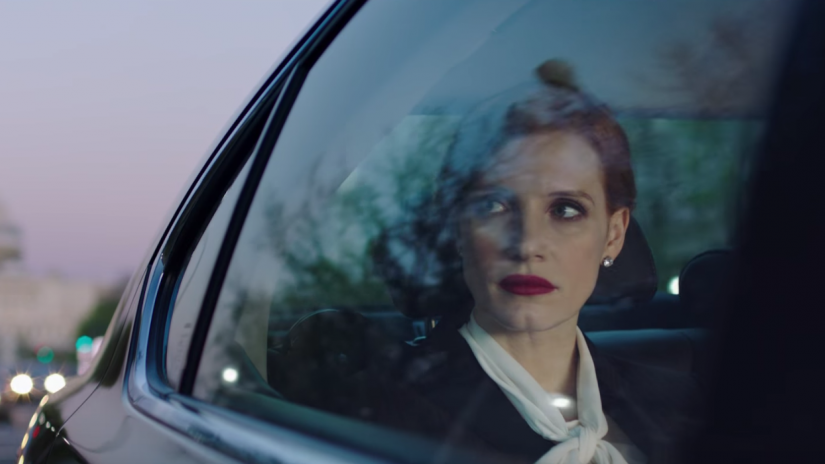