The comedy’s screenplay was written by Jennifer Saunders, based on her eponymous sitcom, where she plays the character of Edina Monsoon, the owner of a barely successful metropolitan PR company. Her best friend and partner in crime Patsy Stone (Joanna Lumley) relishes in the high life. Eddy and Pat ooze in glitz and glamour: whatever they desire is just a credit card swipe away. Sipping champagne, from morning till night, and hanging around in London’s trendiest hotspots is what the two elderly socialites love the most. However things take an unexpected twist when Eddy accidentally pushes Kate Moss in the river Thames, during an uber fashionable launch party. A media storm surrounding the supermodel’s untimely demise will  have the paparazzi chasing Edina all over the City. As a last resort the two wacky ladies flee to the French Riviera, where more adventures await them.

The premise is incredibly humorous, but the jokes and pranks, that keep the action going, aren’t that funny after all. Furthermore, the film seems to address solely an English audience, who is acquainted with the show that aired on BBC. ‘Absolutely Fabulous: The Movie’ ends up being “exclusive,” in the sense that it does not adopt a style that welcomes spectators who approach these characters as a tabula rasa. 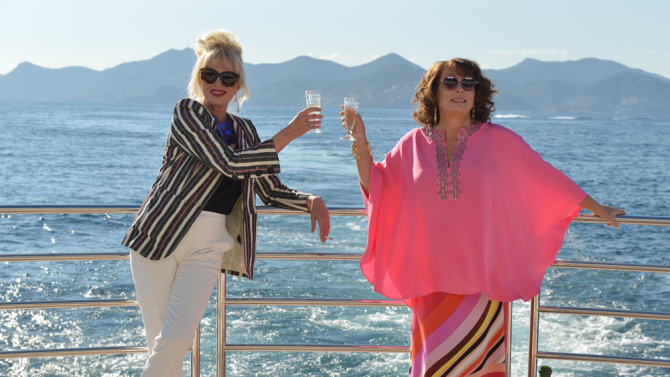