Immediately judging a person just on their appearance is an erroneous trait that many people take on, as they’re encouraged to follow society’s lead of not thinking they should appreciate others for their personalities more than anything else. Swiftly being placed in dangerous situations that reveal people’s character as they struggle to protect themselves ultimately proves whether or not those instant intuitions are indeed accurate. Director and producer Fede Alvarez, who wrote the script for the horror film, ‘Don’t Breathe,’ with his frequent co-scribe, Rodo Sayagues, stunningly proved that people’s natural reactions in times of despair offer the most accurate insight into their temperament.

The crime drama, which is now available on digital, is set to be distributed on Blu-ray and DVD tomorrow by Sony Pictures Home Entertainment. The Blu-ray, DVD and digital releases will include bonus content that takes viewers behind-the-scenes of the filmmaking experience alongside the cast and crew. Alvarez takes fans through five featurettes, including ‘No Escape,’ ‘Creating the Creepy House,’ ‘Meet the Cast,’ ‘Man in the Dark’ and ‘The Sounds of Horror.’ In addition, the releases include eight deleted scenes with optional Director’s Commentary, as well as a full feature commentary with Alvarez, Sayagues and actor Stephen Lang.

The home distribution for ‘Don’t Breathe’ follows it’s successful theatrical release in August, when it debuted at #1 at the box office and remained in the top spot for two weekends in a row. The thriller began receiving critical acclaim when it premiered at SXSW in March.

‘Don’t Breathe’ follows Rocky (Jane Levy), Alex (Dylan Minnette) and Money (Daniel Zovatto) as they struggle to survive in Detroit. They break into the houses of the wealthy and steal possessions that they either keep or sell to make quick cash. They’re able to bypass their targets’ security systems because Alex had the ability to garner inside intel; the people they target are customers of his father’s security company. While he’s reluctant to take part in the heists, he agrees because he has romantic feelings for Rocky. He also wants to help her because she’s determined to gain extra funds in order to protect her young daughter and leave their current living situation behind. The at-times aggressive Money, meanwhile, who’s dating Rocky, tags along on the heists just for fun.

Money then discovers that a blind military veteran, who’s simply known as The Blind Man (Lang), lives alone and may have cash stashed away in his house, after he won a major settlement when his only child died in a driving incident. Alex is apprehensive about the idea of stealing money, however, because if they get caught, they would receive a harsher sentence. But Rocky readily agrees, as she’s thrilled at the idea of securing funds quickly. So the group decides to continue with the plan, which initially appears to be easy because The Blind Man’s house is the only one that’s occupied in his immediate neighborhood that’s otherwise abandoned.

But the trio’s seemingly well-planned idea is quickly foiled, as their target proves he’s not as helpless as he appears. Alex, Rocky and Money discover that The Blind Man is hiding something that’s more sinister than they ever would have expected. The thieves seek refugee from their unexpected predator in a locked basement, where they find something that explains his harsh attitude toward intruders.

Alvarez generously took the time recently to talk about co-scribing and helming ‘Don’t Breathe’ during an exclusive phone interview. Among other things, the filmmaker discussed how he embraces working on several aspects of his movies, including writing, directing and producing, as it offers him more creative freedom while he’s filming, especially with an emotional and action-driven story like his current horror thriller. Alvarez also praised the crime drama’s cast, as he pointed out that they had to make viewers empathize with their characters, even though they have questionable morals.

ShockYa (SY): You co-wrote the horror film, ‘Don’t Breathe,’ with Rodo Sayagues, after you previously collaborated together on such movies as ‘Evil Dead,’ ‘Panic Attack!’ and ‘El cojonudo.’ Since you’re frequent writing partners, how did your established working relationship influence your work together on the script for your latest film together?

Fede Alvarez (FA): We have known each other for a long time, and have previously worked on a few other films together. This one was an exciting experience for us. As collaborators, when we find an idea that gets both of us excited, it usually ends up being something that we enjoy working on. Our collaboration works in a way that I’ll bring something to Rodo, and he’ll suggest something else to me. The great thing is that the other person usually hasn’t thought of those same ideas.

SY: Besides co-scribing the film, you also directed the movie, much like you did with your previous collaborations with Rodo. How does writing a script influence the way you approach helming a movie?

FA: As a director, it really helps to work on a project that you also helped develop as a writer. The main way it helps is that when the actors ask questions about the characters and the script, you already have the answers, because you worked on the story. Everything comes out of your imagination, so there aren’t a lot of arguments with the actors about what the writer meant. So it helps the actors when you know all the motivations behind the script.

SY: The thriller features a diverse cast, including Dylan Minnette; Jane Levy, who you previously worked with on ‘Evil Dead;’ and Stephen Lang portrays The Blind Man. What was the casting process like for the horror film?

SY: Once the actors were cast, were you able to have any rehearsal time with them, particularly so that you could collaborate on creating the characters’ backstories and motivations?

FA: We didn’t rehearse too much, because I didn’t want them to get too comfortable in their ways, and just play what they rehearsed. So the rehearsal time was usually spent reading the script, and allowing the actors to ask questions about it, including the dialogue and why a character made the decisions they made.

SY: Besides crafting the emotional arcs of the characters, what was the process of creating the physicality and stunts for the characters while you were on the set? Did you mainly utilize practical effects on the set?

FA: It was never easy with this film. It was very challenging, both physically and emotionally. The actors really had to bring their best efforts, and nobody could be lazy. If they were lazy, it would show on screen. So I think everyday was a tough day on this movie; there wasn’t any day that I can recall being easy. I’m sure the actors would say the same thing, because of the physicality. The physical challenges that the characters faced usually translated to the actors. So it was a very tough movie to make for everyone involved.

SY: In addition to co-writing the script together, you both also served as producers on the movie. What interested you both in also taking on the producing roles?

FA: Producing was great. Obviously, when you’re a producer, you have a lot more tasks you have to do, and you can’t just focus on the directing. So it was challenging in that way, but it also gave me more control. While we were making the film, I was the only producer on set, so I didn’t have to run ideas by anyone else, and could really do whatever I wanted.

So it’s great when you’re a director who also produces your film, and you’re not just hired to shoot someone else’s script, which is usually the case in Hollywood. With this film, since I was directing and producing a script I wrote, I was deeply involved in every process, and I had a lot more control. That’s really important and helpful for a film like this, since I had a lot of risky ideas.

SY: Since the horror film is set in The Blind Man’s home, did you film the movie on location? How did the location where you shoot the thriller influence the way you approached telling the story?

FA: All of the exteriors were shot in Detroit, where the movie takes place. But most of the interiors were filmed in Europe on a sound stage. We basically built the whole house, because we felt it would be beneficial in telling this type of story. It would have been unlikely to find a house that had everything we needed.

SY: The thriller had its World Premiere at SXSW, where also chosen as the opening night selection of the Midnighters Section. What does it mean to the both of you that the film received attention from the festival?

FA: The experience was great, as we love the festival. Our first movie, ‘Evil Dead,’ also premiered at SXSW in 2013, so it was great to go back to the same festival.

One of the best parts was that when ‘Don’t Breathe’ premiered at the festival, hardly anyone knew anything about the movie. No one knew what it was about, who the characters were and what the tone and style were like. So that was a great way to show to an audience for the first time. So we definitely have good memories from that release.

SY: Are you all interested in working together with Rodo again in the future, particularly on another genre film?

FA: We’ve been working together for a long time, and we’ll continue working together on a lot more films. One of the things we’re considering right now is making a sequel for this film. It’s going to be completely unorthodox and different from what people expect. But that’s what we like about it. We definitely want to tell more stories about The Blind Man, so that’s probably going to be the next thing that we write.

Check out images of the cast and crew, as well as the Blu-ray cover art, and watch the official trailer, for ‘Don’t Breathe’ below. 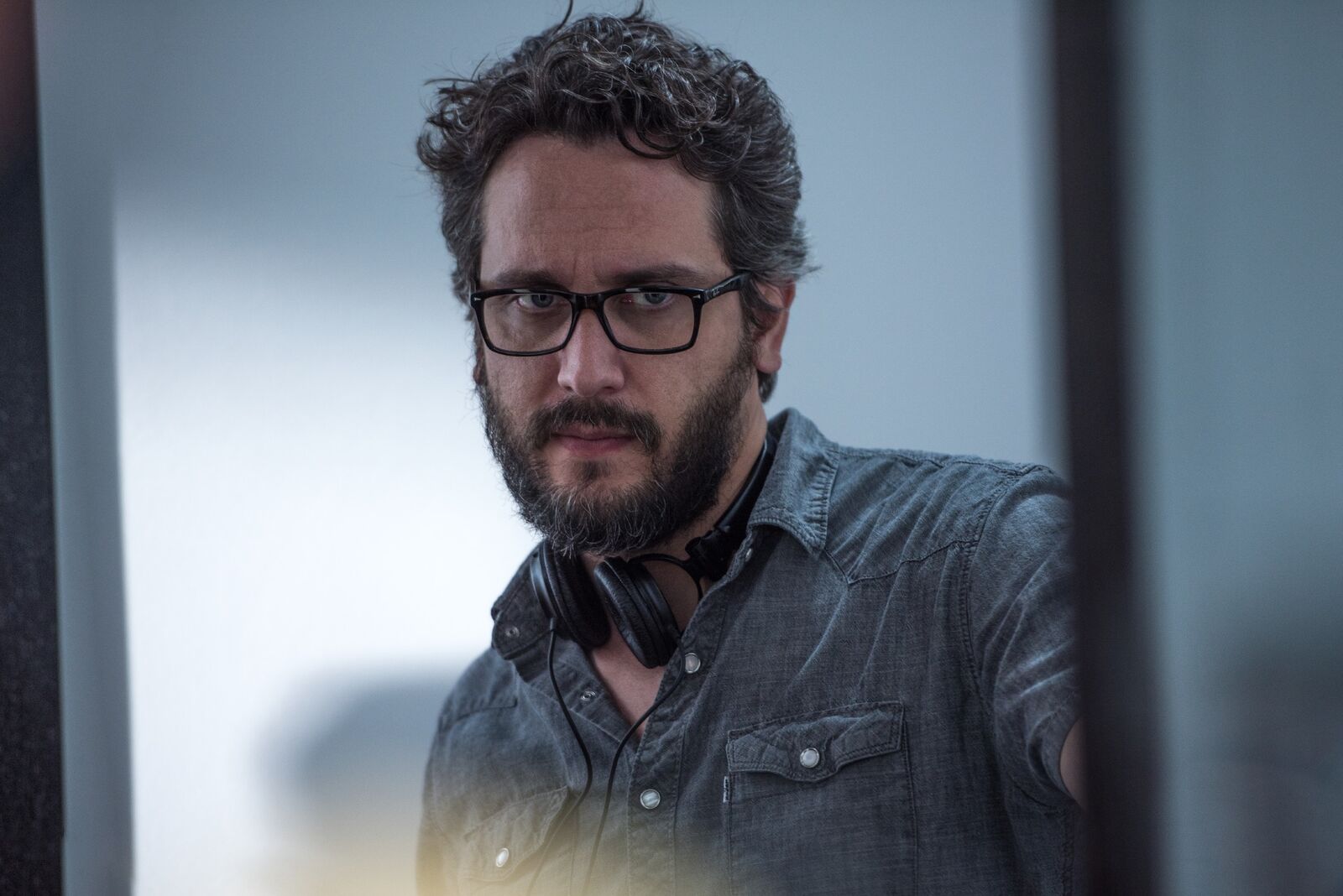 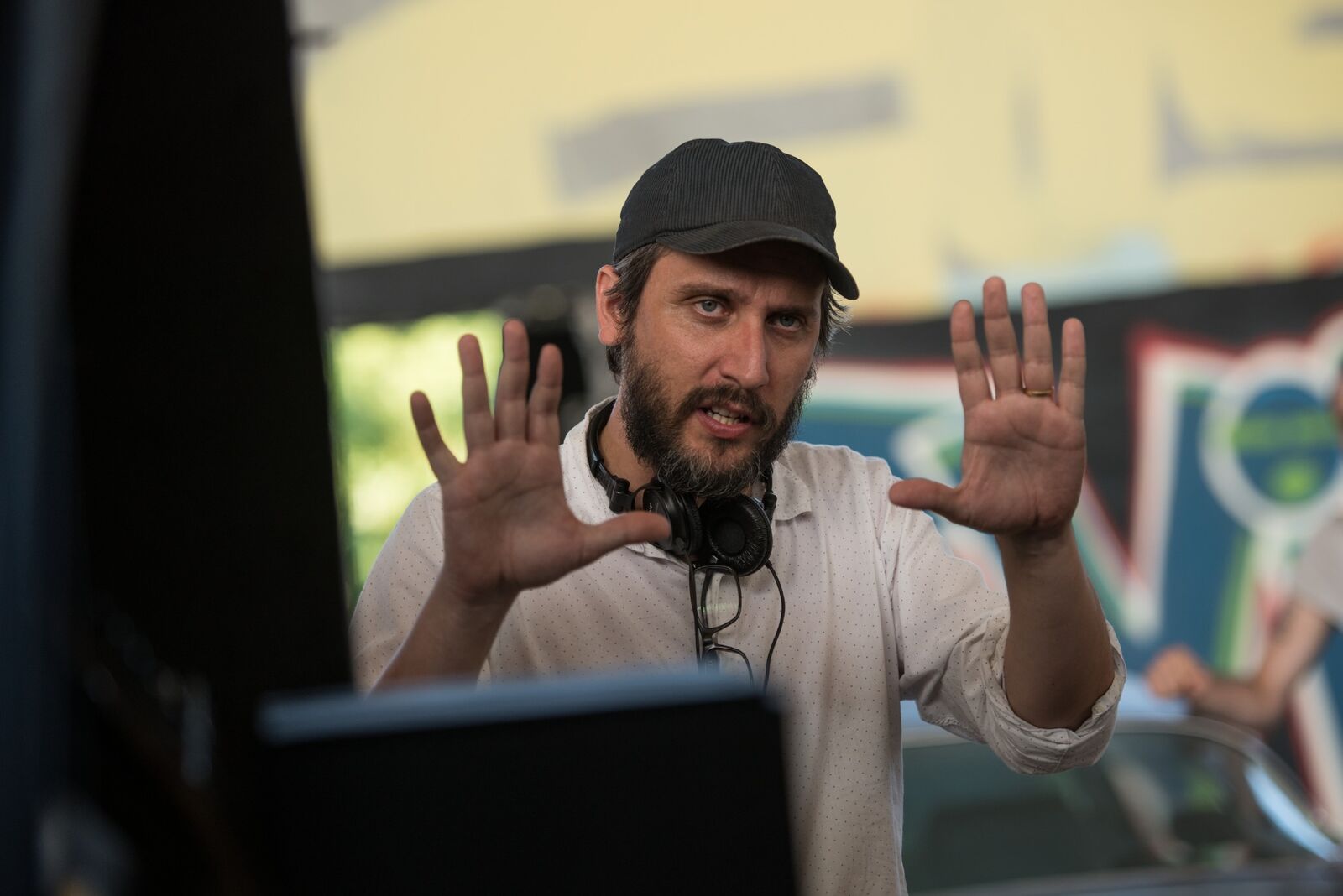 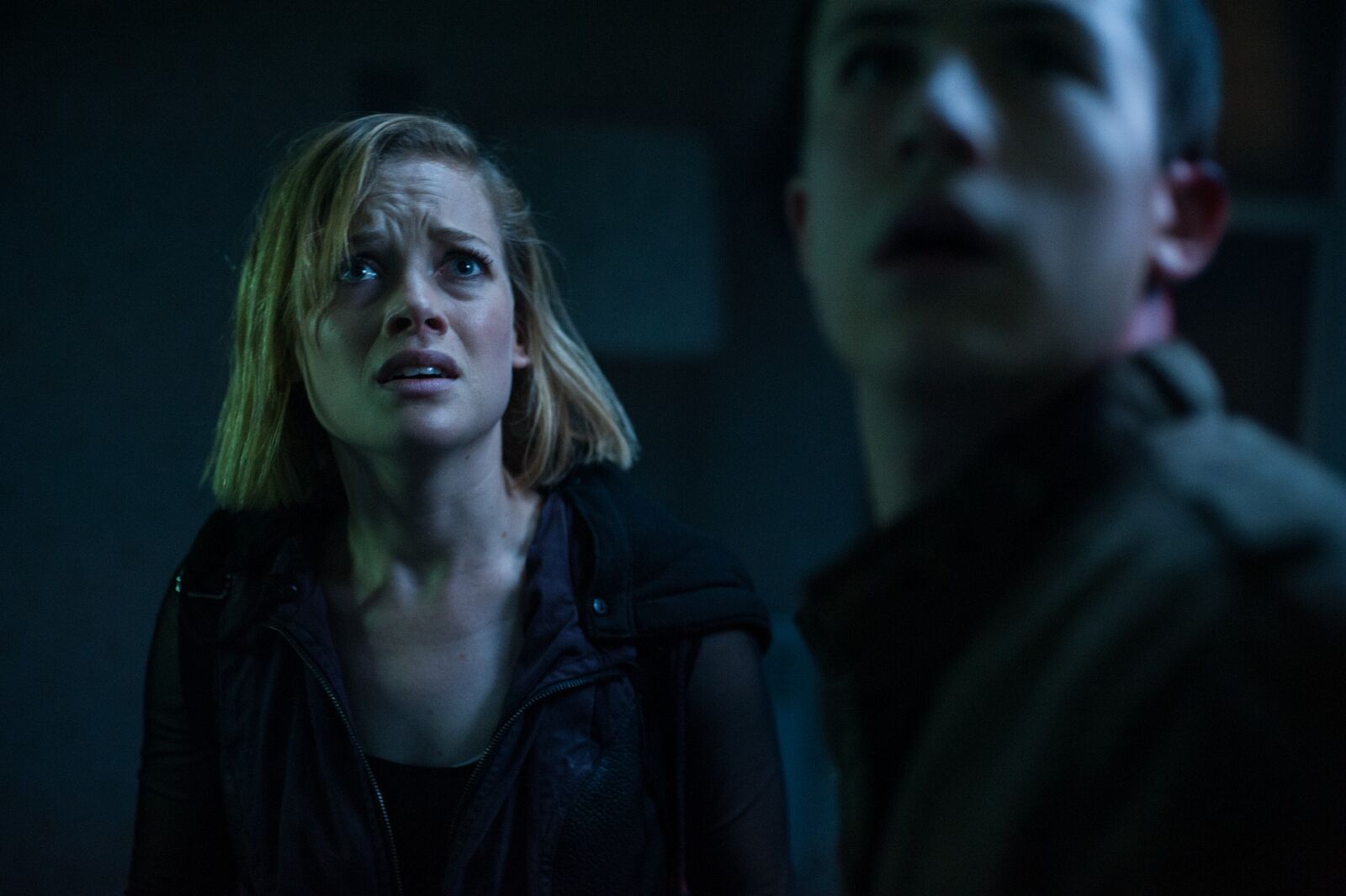 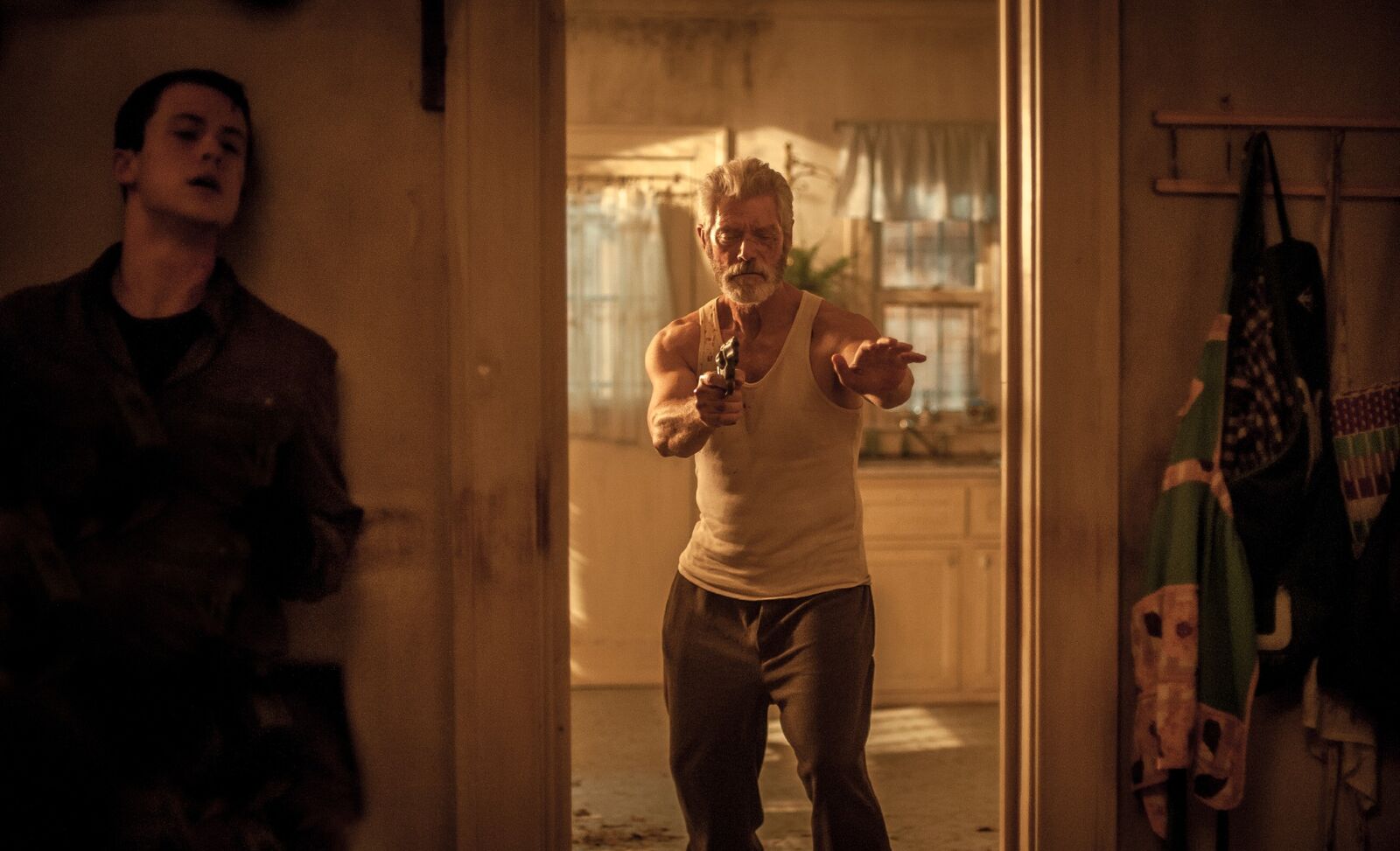 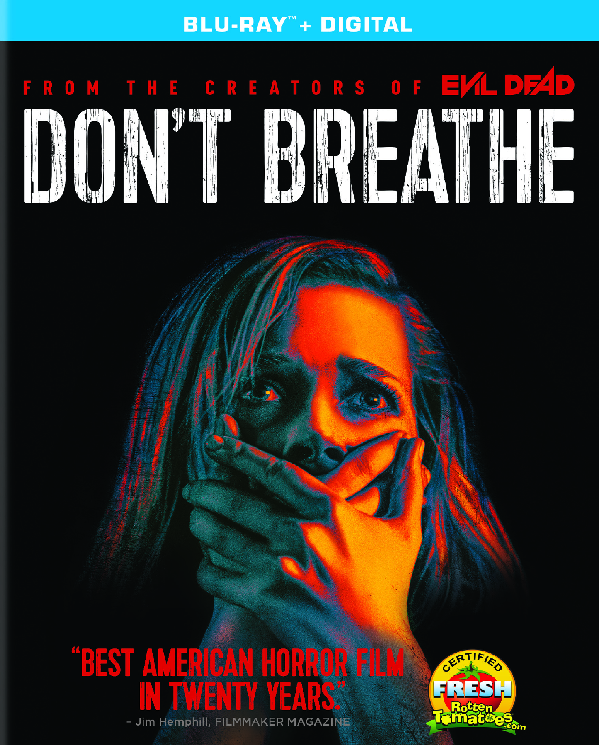