One sunny afternoon after completing a walking tour of the Acropolis we returned to the Electra Palace Hotel in Athens for R&R before dinner. While stretching on the bed and flipping channels of the TV monitor I stumbled upon CNN’s Wolf Blitzer standing at the Boston Marathon Finish Line while giving an agonizing speech about bombs, terrorists, and dead civilians. What started out as a festive celebration on Monday April 15th, 2013 turned into a tragedy when two explosive bombs killed three civilians and two policemen and injured two hundred and sixty-four bystanders, some requiring limb amputations. The F.B.I. took over the investigation, released surveillance videos of the suspects, and identified them as brothers Dzhokhar and Tamerlan Tsarnaev. The Bureau proceeded to hunt them down before their eminent departure to New York City in a stolen SUV. Tamerlan was killed during the chase, leaving Dzhokhar to face a federal trial, resulting in guilty verdict and a death sentence in April 2015.

Director Peter Berg commemorated the Boston Marathon 2013 by creating Patriots Day and giving a fair and an unbiased approach to the events that transpired. The film’s name is based on a Massachusetts’ state holiday commemorating the  1775 Battles of Lexington and Concord during the American Revolutionary War. It is still observed there every third Monday in April, with the largest celebration centering on the Boston Marathon, established on April 19, 1897.

The plot focuses on Sergeant Tommy Saunders (Mark Wahlberg playing a fictitious character), who joins the hunt for the two bombers. During the next one hundred and thirty-three minutes we are introduced to Richard DesLauriers, Special F.B.I. Agent (Kevin Bacon); Ed Davis, Boston Police Commissioner (John Goodman); and Jeffrey Pugliese, Sergeant at the Watertown Police Department (J.K. Simmons). The trio, accompanied by hundreds of police and F.B.I. law enforcement personnel spends the entire screen time planning, arguing, chasing and celebrating the capture of the wanted men. Little time though is dedicated to exploring the Tsarnaev brothers’ characters or motives.

Flawless acting is provided by veteran actors Kevin Bacon, John Goodman and J.K. Simmons portraying their respective characters. Mark Wahlberg, who also produced this film, plays the good-hearted, foul-mouthed, Sergeant Saunders, who despite an injured knee rises up to the occasion and defends Boston and its residents. Significant stunt work is done by Korey Fackler and Brett Smrz for J.K. Simmons’ and Alex Wolff’s parts respectively.

Actual F.B.I. footage was merged into the film by Gabriel Fleming and Colby Parker, thus adding authenticity to a most horrific event. Filming locations include: Boston, Cambridge, Framingham, Malden, Newton, Quincy, Peabody, Somerville, Southfield and South Weymouth, all located in Massachusetts. Extensive docudrama-style photography with a hand-held camera was done by Tobias Schliessler, even in regular one-on-one conversational scenes. 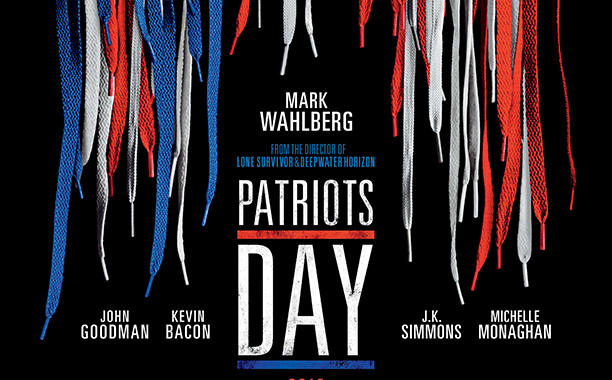