When a child who’s already contending with the daunting process of entering adolescence must also accept that their love for their terminally ill parent isn’t going to preserve their life, the teen must find comfort in something else to help them grieve. The acclaimed new fantasy drama, ‘A Monster Calls,’ respectfully and truthfully chronicles how a parent’s illness affects not only them, but their entire family, particularly their child. The teen in the film resorts to relying on the creature he dreamed up, who Liam Neeson portrays through his first motion capture performance, in his fantasy world, in order to find the comfort he so longingly desires.

Much like the 2011 award-winning book of the same name by Patrick Ness that the film is based on, the drama’s story powerfully reflects on the realistic process of learning how to contend with having relationships change in times of despair. The movie was adapted for the screen by Ness, and directed by ‘The Impossible’ and ‘The Orphanage’ helmer, J. A. Bayona. ‘A Monster Calls,’ which received a limited theatrical release in the U.S. on December 23 by Focus Features, will receive a wider expanded distribution this Friday.

‘A Monster Calls’ follows a British 12-year-old adolescent, Conor (Lewis MacDougall), as he’s learns to contend with more emotional struggles than the other boys his age in his school. His devoted mother (Felicity Jones) is battling terminal cancer. Not only must the strong-willed protagonist watch his beloved mother try to fight her illness, he also has to try to find a connection with his overbearing, but well-meaning, maternal grandmother (Sigourney Weaver). Conor’s father (Toby Kebbell) has returned to England to visit and help his son during the transition. But the pre-teen ultimately has trouble also connecting with his healthier parent, who has resettled in Los Angeles with his new family.

Conor is also dealing with his guilt of wishing his mother can finally find peace. His remorse manifests itself in horrific nightmares, during which he repeatedly watches her fall into a hole that violently opens up in the earth beneath a nearby church. Then one night, the title character, an old tree beside the church, mysteriously comes to life (Neeson).

The tree informs Conor that he’ll visit him again on three subsequent nights to tell him a story. On his fourth visit, the title character will ask the pre-teen to tell him a tale in return. Between the visits, not only does Conor worry about not having a story to tell his new ally, but he also must contend with being bullied by several of his peers at school.

As a way to express his emotions about the painful situations that are fueling his life, he spends his free time drawing in his notebooks. Conor’s drawings ultimately reflect the way he envisions the stories the tree tells him in his mind. The misplaced sympathies in the tree’s stories reflect the details of Conor’s family life. As the protagonist reflects on the messages in his new ally’s tales, Conor ultimately finds an unlikely ally in the Monster, who relentlessly guides the boy on a journey of courage, faith and truth.

Neeson generously took the time recently to sit down for a roundtable interview at The Waldorf Astoria Hotel in New York City to talk about starring in ‘A Monster Calls.’ Among other things, the actor discussed how he valued the experience of being able to collaborate with MacDougall on the motion capture elements of his performance, as he feels the young star possesses a natural talent for acting. Neeson also praised Bayona’s ability of treating the movie’s teenage lead performer as an equal, and also valuing his opinions, while they were filming on the set.

The Oscar-nominated actor began the conversation by explaining how he found the process of working in motion capture for the first time to be “strange. You act in what the computer people call a volume, although I have no idea why they call it that. In the space” where Neeson was performing, “there were 70 cameras in a circle around me. There were also 70 cameras above me. I was acting my scenes in the middle.”

Neeson also pointed out that it was a different experience for him as an actor, because the crew didn’t have to keep setting up the cameras to show his co-stars’ point-of-views. “So everything was covered when I was filming,” the performer noted.

“Lewis was on the set when I was acting, but he was off to the side. He was there to help give me perspective, but he was giving every scene 100 percent,” the performer explained. “We weren’t able to look at each other, obviously, but he still did great.

“I’ve made a few movies with kids over the years, but Lewis is very special. I wasn’t aware of him acting at all,” Neeson explained. “It was quite a revelation. I’ve never experienced that type of acting before from another actor or actress, and especially from a child. Lewis was 12 at the time we filmed the movie two years ago, and some days I would walk away thinking, this kid’s amazing. It was like he was going through Shakespeare’s ‘Hamlet’ with the emotional things he had to do for this film. He was phenomenal.”

When he then began discussing whether he felt protective of MacDougall while they were filming their emotional scenes together, Neeson shared that “I remember when my first son was born, someone asked me how becoming a father changed me. I said, ‘I don’t think I’ve changed, but I know that every time I put on a shirt, I boil a kettle or whatever I do, it’s informed by the fact that I’m a father now.’ So hopefully my acting, especially when I was working with Lewis, was informed by the fact that I’m the father of two boys.

“This is an extraordinary story of a kid who can’t talk to anybody. In the beginning of the film, you see him washing dishes and getting the laundry. So you think, this is a kid who has to manage by himself. It’s sad that his mom’s dying, and no one’s confronting that,” the performer explained.

Neeson then discussed the experience of preparing for his role in the fantasy drama. “I’m a big fan of myths and legends. The Yew tree is featured in many pieces of Irish literature and fairy tales. It’s an ancient tree that heals.

“I remember when J.A. Bayona showed me the bust of what he wanted the creature to look like, (the Monster’s) nose was broken in some places. So I thought, it would be fun to match his voice, as well as the way he breathes, to that,” the Irish actor recalled.

“I rate Patrick’s book along with the best of Oscar Wilde. His parables and fairy tales are also like The Brothers Grimm-it’s amazing,” Neeson stated as he then praised the novel the film is based on.

“I received the book in the usual way-Bayona’s team sent it to my team. They wanted me, so my agent called me and said, ‘I’m sending you this book. They’re making a movie version,'” the performer revealed. “I had seen Bayona’s film, ‘The Orphanage,’ and I though he was quite special. I also knew he works with the ‘Pan’s Labyrinth’ crew, so I thought this would be a pretty special film. I knew it would be very multi-textural and visual.”

Neeson then spoke the experience of mixing his over-powering physical stature with with his softer emotional side in such roles as the Monster. “I think that just comes across. We all have a different aura. The best actors and actresses are like chameleons. But I think their aura still comes across, because most people can never change,” the performer explained.

“Some people, like Meryl (Streep), can change. I think that I have some of those qualities in certain roles,” Neeson divulged about being able to change his physical and emotional attributes, based on the type of role he’s playing. “So with this role, I think it was a nice mix of who I am, my aura and the story.”

The Golden Globe-nominated actor also mentioned what he hopes that audiences can take away from ‘A Monster Calls,’ which he called “a wonderfully entertaining film. “There aren’t any absolute solutions to any of the stuff that the Monster presents (Conor) with in his tales…he’s basically saying that life is complex and human beings are complex.”

Neeson also noted that when he “read the book for the first time…it just kept haunting me in some way,” which is something the script did, as well. The performer added that he hopes the film will also leave a lasting impression on people. “There’s something (that) I call refrigerator questions. You come back from the cinema. You’ve seen the movie, and you’re going to the fridge, and you go, “Wait a minute, I don’t understand…’ That always at the refrigerator.”

Further discussing what he took away from his role as the Monster in the drama, the actor mentioned that “the motion capture process was a bit intimidating on the first day, as was working with Lewis…the gamut of emotions he went through was extraordinary, and he wasn’t showing off…taking that experience with him and Bayona was amazing,” Neeson shared.

As with “‘The Impossible’ and certainly ‘The Orphanage,’ he brings these performances out of these kids that is like Spielberg. I remember thinking Bayona is like Steven, as he can just get these performances from these kids. You think of Drew Barrymore in ‘E.T.,’ which was extraordinary,” the actor noted.

Neeson concluded the interview by also sharing why people may compare Bayona with Spielberg. “I could see (Bayona) huddled when we were doing our motion capture stuff with Lewis. Never once does he talk down to a child. That’s the big mistake” that some directors make on their sets.

Neeson feels like filmmakers should talk to child actors “as an equal. (Bayona would) talk about the emotion he wanted (MacDougall) to try and reach. He would say, “Well, maybe think of this, or what about if you tried it that way…(Bayona and MacDougall) were really connected.”

Watch the official trailer for ‘A Monster Calls’ below. 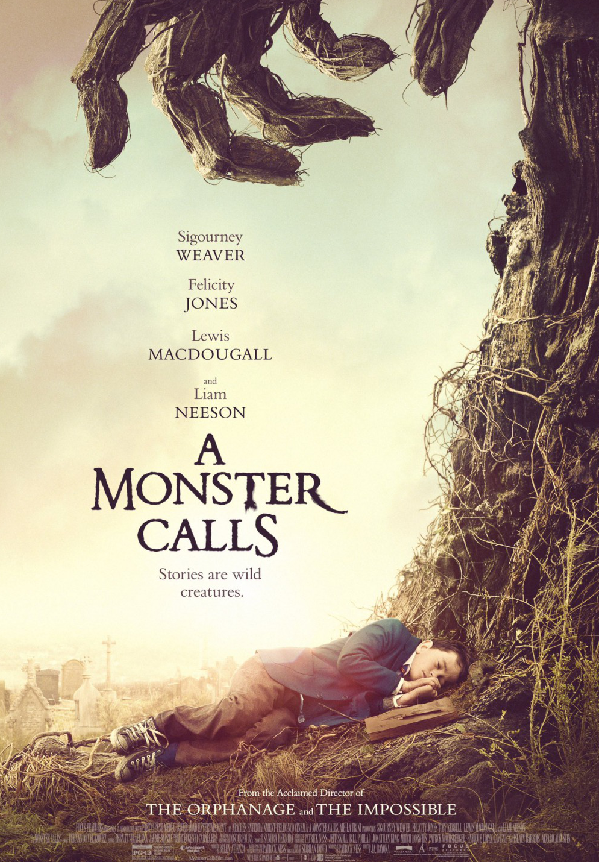