Sometimes the most powerful and motivational inspirations aren’t acts that can be visibly witnessed, but instead are emotionally felt. As people transition into adulthood and strive to find independence, they often rely on the deeds of others to help guide them into maturity. But the people who truly persevere are those who seek direction, but mainly rely on their inner strength to attain freedom and individuality. That’s certainly the case with Michelle Smith, the subject of the new documentary, ‘Best and Most Beautiful Things,’ who admirably overcomes her disabilities to become truly liberated.

The film, which marks the documentary directorial and producing debuts of Garrett Zevget, was executive produced by one of the Emmy Award-winning producers of ‘Friends,’ Kevin S. Bright. After receiving a limited theatrical released in New York and Los Angeles last month, the documentary is now available on DVD and on iTunes. Ihe movie, which had its world premiere at last year’s SXSW, is also set to debut on Netflix tomorrow.

‘Best and Most Beautiful Things’ follows Michelle, a vibrant young woman who is legally blind and has been diagnosed on the autism spectrum. After graduating in 2012 from the Perkins School for the Blind in Watertown, Massachusetts, Michelle moved back in with her mother, Julie, in her hometown of Bangor, Maine. After returning home, she finds herself unemployed and isolated.

But Michelle is determined to find a community where she feels as though she belongs and is accepted. Finding that she can truly be herself and uncensored online, she undergoes a journey of self-discovery as she begins to make friends. Her searches for independence, love and connection ultimately defies labels as she chases big dreams with humor and bold curiosity.

Bright first met Michelle while he was teaching a filmmaking class at the Perkins School. Zevgetis also volunteered his time at the school, and began to get to know Michelle while working there. Independently, both the producer and director were completely struck by her authenticity and exuberance, and have been involved with Michelle and her story ever since. While shooting the documentary, the filmmakers discovered that there’s a startling lack of opportunities available for all people to fully engage in American society. So they decided to highlight the need to fix the fear and misunderstanding people have towards those who are considered different.

‘Best and Most Beautiful Things’ offers an engaging and powerful insight into what it means for people with disabilities to find their true personalities and independence, and prove to the world how vital they are to society. Despite the obstacles Michelle has faced from society since graduating from the Perkins School, Zevgetis’ enthralling storytelling and compelling cinematography prove that people who are considered to be different deserve to be heard and appreciated.

The documentary captivatingly showcases that despite the obstacles Michelle has forced to overcome throughout her life, including her parents’ divorce when she was a teenager and her struggles to find and keep a job, people like her are heroes whose stories need to be told. The film chronicles her inspirational journey of her initially finding comfort amongst others like her while in high school, to her grippingly regaining her confidence a few years after graduation when she begins to recognize her worth again.

The captivating and realistic chronicling of Michelle’s equally influential struggles and successes in ‘Best and Most Beautiful Things’ stunningly showcases how many people like her want to feel like they lead a fulfilling and worthy life. Despite her fears of not being accepted and having her emotions taken seriously, Michelle serves as an inspiration for anyone who has the strength to chase their dreams. Her relentless pursuit of achieving independence, in both her professional and personal lifes, makes her a hero and inspiration for everyone.

To find more information on the Smith family and ‘Best and Most Beautiful Things,’ visit the film’s official website, as well as its Facebook and Twitter pages. Watch the trailer, and check out the poster, for the documentary below. 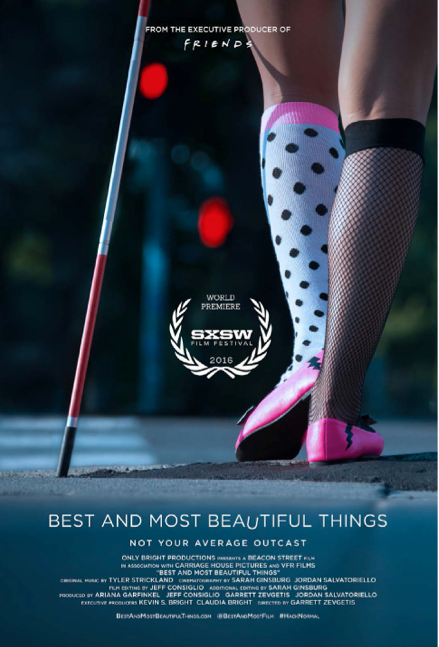