The holiday season is meant to be a joyous time of year, when giving is better than receiving. But the self-serving Santa, Willie Soke, is up to his infamous tricks again, as he still believes that he deserves to be the receipant of everyone’s gifts. But he’s actually providing film audiences with laughs, as his comedy sequel, ‘Bad Santa 2,’ is being released today on home entertainment, including 4K UHD, Blu-ray and DVD, by Broad Green Pictures.

In celebration of ‘Bad Santa 2’s home release, Shockya is offering three lucky winners a Blu-ray of the comedy. To enter, email us at ShockyaGiveaway@aol.com. Let us know that you’re entering to win the ‘Bad Santa 2’ Blu-ray contest in the email’s subject line and message. You have until next Tuesday, February 28, to enter, and you can enter the contest once daily. After February 28, we’ll pick the winners at random and notify them through email. Good luck!

Billy Bob Thornton, Tony Cox and Brett Kelly reunited in ‘Bad Santa 2,’ after they co-starred in the hit 2003 original film together, ‘Bad Santa.’ The follow-up, which was released in theaters on November 23, 2016 by Broad Green Pictures and MIRAMAX, was directed by Mark Waters and written by Johnny Rosenthal, Doug Ellin and Shauna Cross.

‘Bad Santa 2’ is now available in a new unrated version on Blu-ray and 4K UHD+Blu-ray. The home release includes the original version of the movie, as well as the exclusive bonus feature ‘That’s My Willie,’ which is an original animated series. Additional bonus materials featured on Blu-ray, 4K UHD and DVD include the featurettes ‘Thurman Then & Now’ and ‘Just Your Average Red Band Featurette;’ ‘Jingle Balls,’ an adult version of the classic holiday song; as well as a gag reel, alternate opening and ending, deleted scenes and more.

Fueled by cheap whiskey and greed, Willie Soke (Academy Award-winner Billy Bob Thornton), teams up once again with his angry sidekick, Marcus (Tony Cox), to knock off a Chicago charity run by curvaceous Diane (Christina Hendricks). But the arrival of Willie’s horror story of a mother, Sunny (Academy Award-winner Kathy Bates), and “the kid”–Thurman Merman (Brett Kelly)-may upset their plan. 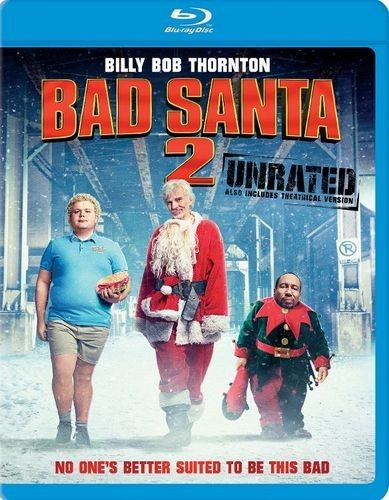