Decanted. Movie Review: A powerful tribute to the history and legacy of winemaking

The amount of talent and luck that goes into winemaking often goes unnoticed by the world, even the public that continuously appreciates and consumes the celebrated drink. So presenting the public with an honest and accurate depiction of the hard work that goes into producing a bottle of wine is a powerful homage the history and legacy of winemaking. The new feature documentary, ‘Decanted.,’ which tracks the trials and tribulations of winemaking in Napa Valley, is allowing wine lovers to enter one of the most intimate winegrowing regions in the world, and embark on a journey of mastering the craft.

The documentary is set to be released today on all digital platforms, including iTunes, Amazon and Google Play. ‘Decanted.’ is the latest film from director Nicholas Kovacic, who also helped write, edit and produce the movie.

‘Decanted.’ shows what it take to make it in Napa Valley, as it follows the process of creating a new winery from the ground up. The documentary chronicles the development of a brand new winery, Italics Winegrowers, from the perspective of elite Napa Valley winemakers who share a passion for their craft in the highly revered wine region. From the initial growth of the grapes all the way to the fermentation process, some of the infinite ways to create wine is highlighted.

The story-telling also digs deep to analyze what kind of person decides to jump into the highly competitive and now well–established arena, and once started on the venture, what it takes to succeed. The movie showcases the overall meaning to be in Napa Valley, and displays the perks and challenges that emanate from the profession.

Kovacic’s natural talents as a documentary filmmaker effortlessly help showcase how Napa Valley’s history and legacy have helped create lasting effects on global wine. The director’s impeccable research into Napa’s history and contemporary perspective powerfully highlights how culturally varied the region is, and how that diversity influences the winemakers’ approach to their craft. While most of the alcohol industries in the United States became culturally homogenized and commoditized for the mass market after prohibition ended, Kovacic effortlessly showcases how the wine business has begun to restore its history and legacy, which has helped lead to a greater appreciation of the drink.

Not only did Kovacic showcase his gripping research process into Napa Valley’s wineries through his writing, editing and editing, he also stunningly humanized the wine owners and workers in the region. The filmmaker makes viewers feel as though they personally know the subjects who are featured in ‘Decanted.,’ particularly through his cultivated and refined examination of Italics’ launch. The luxury producer of Bordeaux varietals and blends is based on 73 acres in the foothills of the Vaca Mountains, and is led by Winemaker Steve Reynolds and Managing Partner Andy Wilcox. The brand’s desire to highlight the best of what Napa Valley has to offer, particularly the wines that are crafted by Reynolds and Wilcox, is compelling highlighted throughout the movie.

Not only does ‘Decanted.’ alluringly explore the true world of winemaking in contemporary society through the winemakers and wineries’ emotional backgrounds and stories, it also naturally exudes exquisite visuals. With the help of co-cinematographers, Nate Pesce and Matthew Riggieri, Kovacic smartly shot the documentary on RED cameras, in an effort to maximize their choices when they started editing their footage. Filming in the Cinema Verite style on the RED cameras captured the natural moments that reflect the truth in the Italics Winegrowers and other wineries in Napa Valley.

The amount of determination, talent and good fortune that goes into winemaking often goes unnoticed by the world, even the people who passionately consume the acclaimed drink. So presenting the public with an genuine depiction of the hard work that goes into producing a bottle of wine is a powerful tribute to the history and legacy of winemaking. ‘Decanted.’ is emotionally and visually enticing, especially since it offers wine lovers the chance to intimately explore one of the most intimate winegrowing regions in the world, and embark on a journey of mastering the craft.

Watch the official trailer for ‘Decanted.’ below. 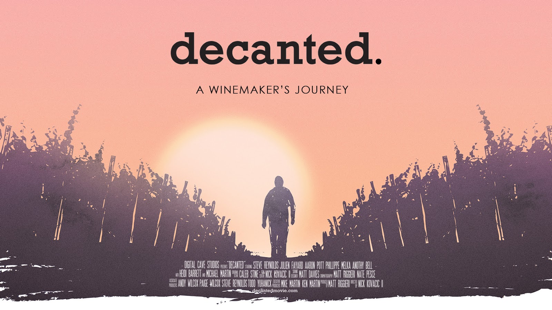