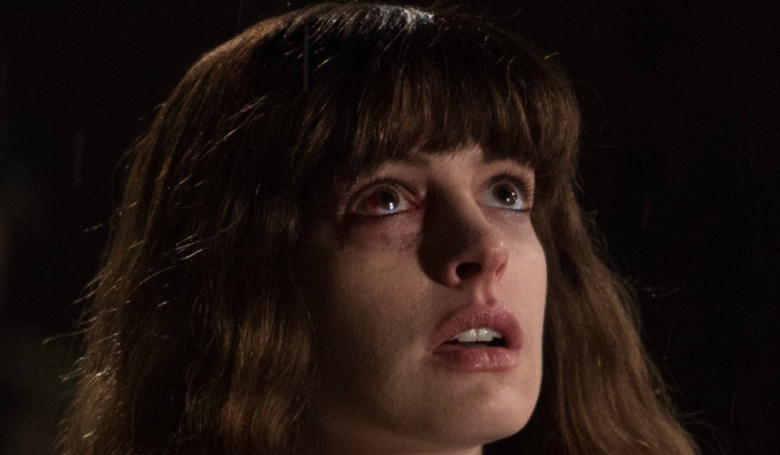 Photo of Anne Hathaway from the film Colossal

Nacho Vigalondo creates a comedic paranormal activity that amuses at times for its absurdity, and bores during other instants for its predictability. Several film genres blend within ‘Colossal,’ as a woman discovers that severe catastrophic events are somehow connected to the mental breakdown from which she is suffering. But no matter the attempts to astonish audiences, the construction of storytelling is foreseeable every step of the way.

Gloria (Anne Hathaway) is unemployed, she likes to party and most of all to drink. Once her boyfriend, Tim (Dan Stevens) kicks her out of their apartment she is forced to leave her life in New York and move back to her hometown. When news reports surface that a giant creature is destroying Seoul, South Korea, Gloria gradually comes to the realization that she is somehow connected to this far-off phenomenon. As events begin to spin out of control, Gloria, with the help of her childhood classmate Oscar (Jason Sudeikis) and his friends, will be forced to determine why her seemingly insignificant existence has such a colossal effect on the fate of the world.

The film surfaces several important themes, such as confronting abuse and violence against women, as well as getting our lives back together. Anne Hathaway effectively depicts a lost soul who reacts. Like a phoenix, she rises out of the ashes, and simultaneously manages to save the world from evil. However, the most enticing performance is by Jason Sudeikis, whose character will reveal itself along the way in a disturbing and powerful way. Dan Steven’s participation is engaging, along with the acting skills of the rest of the cast (Tim Blake Nelson, Austin Stowell, Agam Darshi, Hannah Cheramy, Rukiya Bernard).

Nevertheless, the actors’ talent does not suffice to support the feeble script. The film seems to be unable to fully accomplish the development of its excellent premise. Satire overflows in the narrative, as it weaves harmonically with the Schadenfreude of the character who turns out to be the villain. Yet, the storytelling is so dull that it nullifies the exceptional postulate that exemplifies ‘Colossal’: learning how to control your inner beast.

Technical: B+
Acting: B+
Story: C+
Overall: B-
Written by: Chiara Spagnoli Gabardi