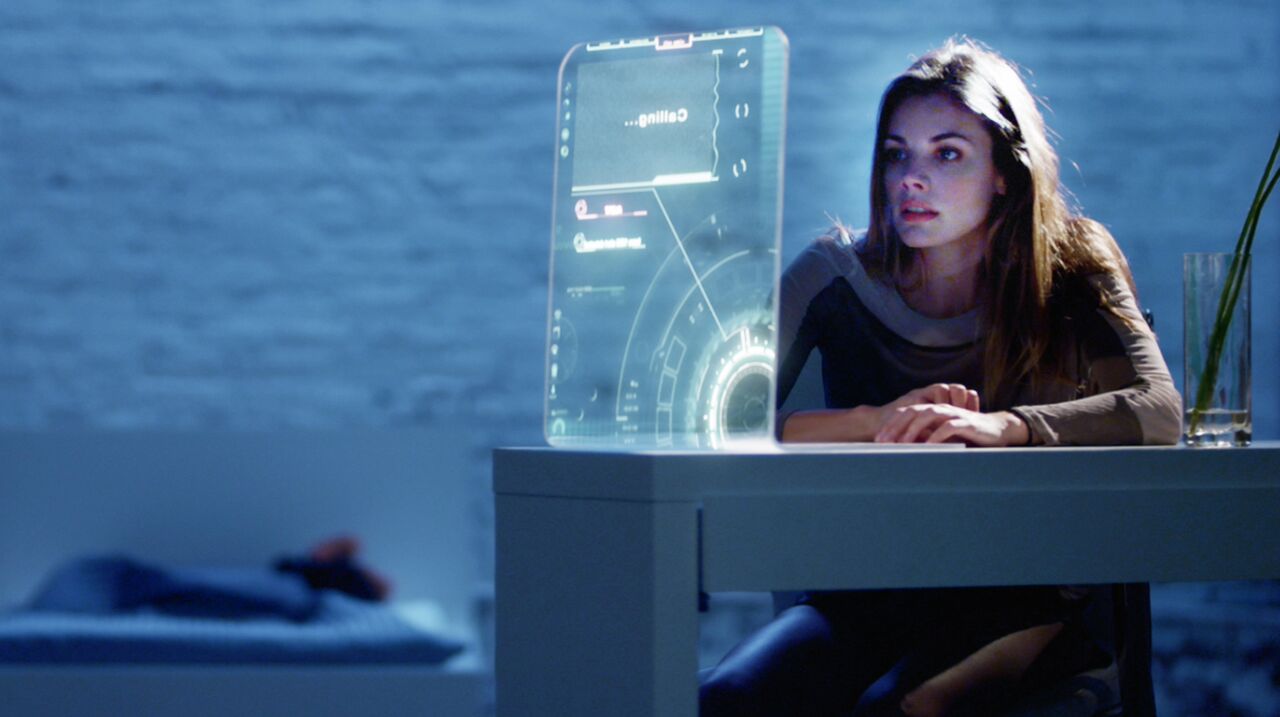 Sarah Habel is the ideal example of an actress who isn’t afraid to cite external situations as a reasoning to journey deeper into her own psyche in order to better connect with her characters. The versatile performer embraced the process of honing her physicality in order to emotionally connect with her character while she shot her new sci-fi film, ‘Atomica.’ As she learned how to best utilize the space in the missile silo where the thriller was shot to her advantage, Habel naturally brought her protagonist on a relatable and powerful spiritual experience that highlights how people learn the most about themselves during the most perplexing of times.

‘Atomica‘ was written by Kevin Burke, Fred Fernandez-Armesto and Adam Gyngell, and directed by Dagen Merrill. The thriller is now available on VOD and Digital HD from Syfy Films. The is also the second movie to receive a theatrical release from the cable channel Syfy, as it received a limited run in cinemas last month.

Set in the near future, ‘Atomica’ showcases how a nuclear disaster has led to the dwindling availability of power. As a result, communications go offline at a remote nuclear power plant that’s isolated in the desert, and it therefore can no longer communicate with its corporate owner. So a young safety inspector, Abby Dixon (Habel), is forced to fly out to the plant, and help bring its equipment back online.

Once she arrives inside the facility, she discovers that the missile silo is only being run by two mean, including the caretaker, Robinson Scott (Dominic Monaghan), who begins to act suspiciously the longer Abby speak to him. The maintenance worker informs the inspector that his sole colleague in the facility, Dr. Zek (Tom Sizemore), hasn’t return since he ventured outside into the radioactive desert.

The longer Abby remains in the facility, the more she discovers that there may be a problem in reconnecting the building to the rest of humanity. Mysterious clues and strange behaviors cause Abby to have doubts about the sanity, and perhaps identities, of the two employees onsite. The inspector is left to make a decision on how to safely escape the potentially dangerous men and facility, and return home to safety.

Habel generously took the time recently to talk about starring in ‘Atomica’ during an exclusive phone interview. Among other things, the actress discussed how she became interested in playing Abby in the sci-fi film, as she noted the protagonist is very contained and restrained, which she admitted is very different than her own personality. Habel added that filming in a real missile silo helped influence her physicality and the emotions she infused into playing Abby during the drama’s production, as being in the real location showed her how oppressed the protagonist would feel when she arrived at the facility.

The performer began the conversation by explaining what it was about the character, as well as the overall script, that convinced her to take on the role of Abby in ‘Atomica.’ “I became interested in the character upon first reading the script. She’s so different from me, as well as any other character I’ve ever played. She’s very contained and restrained, which is a huge challenge for me. So I was eager to meet with Dagen, the director, and talk about how I thought I could contribute to the film. We then just went for it!”

Abby seems to remain strong-willed while she’s trying to determine what happened to the facility’s communications system, as well as figure out the motives of the two men who are working in the power plant. Habel then revealed why she finds it so important for Abby to remain resolute while she’s working, as well as what appeals to her about playing such independent women in all of her projects.

“Just being able to play a character like Abby feels so good. She’s driven by the truth, and tries to do the best for everyone. Her conscience is really strong, and she’s really good at her job. I think playing this type of role is great for any actor,” Habel explained.

The performer then further discussed what her collaboration process was like with Merrill while they were filming the thriller, and how their work together helped make Abby such a courageous protagonist. “Dagen is great-he’s very collaborative, and also very cool and calm. There are ups and downs on any project, so working with him gave me a great sense of the character. I feel like Abby and Dagen share some qualities-they both have quiet, determined strength. So I was able to drawn from watching him.”

Since the sci-fi movie is driven by Abby’s emotional response to trying to determine the motives of her colleagues, while also trying to secure the facility, Habel explained how those elements influenced her process of creating her protagonist’s physicality. “I always try to approach every character from the start from a physical point of view. I think about where they hold their tension, and where their voice fits,” the actress revealed.

Habel also pointed how that while she was filming ‘Atomica,’ she had to bring a bigger sense of physicality to her role. In the drama, “There’s a lot of running, and there’s also a fight scene,” the performer divulged. “So knowing all of that was coming helped inform the way her physical self was constructed.

“Also, we shot the film in Washington, and it was so cold,” Habel also shared with a laugh. The movie was set on “an underground, abandoned missile silo. It was about 40 degrees all the time. So there was a physical tension from your body being cold all of the time, but that was actually really helpful for me.”

Further speaking about the differences of shooting on locations and studio sets, the actress added that she usually works more on sets while she’s filming television shows. “If a show’s going to shoot in a family’s house for every episode, they always have that set. But every movie I’ve done has been made on location. I find both to be really interesting,” Habel stated. She also revealed that “I’m so envious of the art director, who gets to create the environment. As an actor, I just walk around the set and am so amazed at how they interpret a scene.

“We did almost all of the scenes for this film, except for the exteriors, which were shot in California, inside this facility that was three stories below ground,” the performer divulged. “So it was very oppressive, and there was no escaping. So it was the biggest shock of a location I’ve ever been on.”

Like Habel mentioned, in addition to starring in films, she has also appeared on diverse television shows, including ‘Riverdale’ and ‘Underemployed.’ She explained that she doesn’t have different acting approaches that she uses for the two mediums. “I just try to approach each role from the ground up. I stat with the physical aspect, like I said before, and work my way inward.

“So the approach for movies and television is the same for me, although films are so much more immersive. If I have some specific physical or vocal thing that I’m doing, it can be more difficult for me to carry that over the course of a television series. If I’m working on a film, especially in a supporting role,” the physicality is something that’s more accessible for Habel to connect with and bring to the screen.

In addition to appreciating the experience of highlighting Abby’s physicality in the sci-fi thriller the actress also embraced the process of collaborating with Sizemore and Monaghan on the set. “Tom and Dominic are such professionals, and have been working in this industry for so long. So just having the opportunity to work with them, and experience their sense of freedom, and how bold their choices are, was very empowering for me.

“We didn’t have a whole lot of rehearsals, which is so much different than theater,” Habel admitted. The actress attended college in her home state, where she received a Bachelor of Arts in Theater from Michigan State University. After graduating, the performer pursued theater in London and New York City, and performed with the Wild Swan Children’s Theater, before landing roles in film and on television.

Habel added that while making ‘Atomica’ with her two main co-stars, “We found a lot of interesting things to go over as we were doing the scenes, which was amazing. But I definitely like to have that rehearsal time, if I can get it,” the performer also divulged about her overall approach to collaborating with her fellow actors as she embodies her characters.