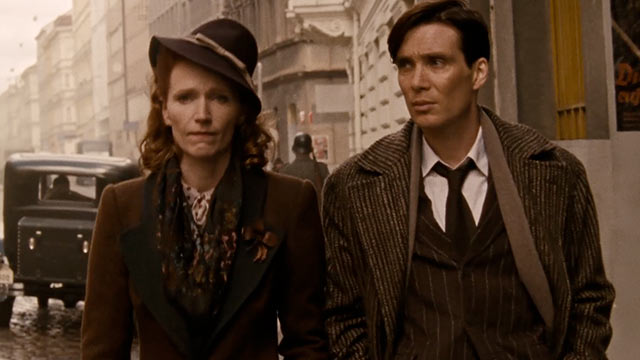 Photo from the film “Anthropoid”

Sean Ellis, whose 2004 film “Cashback” deals with how supermarket workers on the night shift spend their long hours, seems suitable for the job since much of “Anthropoid” takes place during the long hours inside an Eastern Orthodox church in Prague.  Ellis’s “Anthropoid,” named after the operation to assassinate the third highest Nazi officer, should have been suspenseful, even thrilling. What emerges, though, may be focused enough on the subject, which is the plot to kill Heydrich, but comes across like two movies in one.  The first half, which slowly shows the planning involving the few remaining members of the Czech resistance, mainly Jozef Gabcik (Cillian Murphy) and Jan Kubis (Jamie Dornan). This is the kind of hour that would appeal to the Masterpiece Theatre Fans.  The latter half, which involves the assassination and its aftermath, loaded down with scores of extras playing German soldiers, is a shooting gallery that would appeal to fans of video games who would eagerly watch as the bad guys, charging a church, get mowed down by resistance machine gun fire like the unfortunate soldiers in the World War One Battle of Gallipoli.

The dialogue is as stiff as the brave resistance fighters, who include two pretty women, Marie (Charlotte Le Bon) and Lenka (Anna Geislerová), a church father who hides the fighters within a secret compartment of the church covered by carpeting, and assorted others to include the Czech who turns in the men’s hiding place perhaps hoping to cash in on the reward, but tells the Gestapo he is doing so to save the lives of innocent Czech citizens.

Reinhard Heydrich deserved his fate as much as did Osama bin Laden in our own time.  He was the principal architect of the “final solution of the Jewish question,” soon thereafter accepting an assignment as head of the German occupation of Czechoslovakia.  The audience, however, is asked to wait patiently as though on an American Airlines tarmac for an hour waiting for weather clearance, for something bold and even thrilling to happen.  Gabcik and Hubis, together with fellow plotter Jan Zelenka-Hajský (Toby Jones), talk and talk, argue about whether to go through with the act.  They say that they have no choice since the Czech government in exile in London ordered the hit.

The Germans speak German.  The Czechs speak English, struggling to maintain the Slavic accents for two hours.  The movie would have been more authentic by hiring people who speak fluent Czech, but then the young women of a hoped for audience, would not have heartthrob Jamie Dornan to drool over.

Does resistance against an immoral, powerful force like the German army and SS work?  That’s for us to decide now, decades after the assassination in 1942, as the SS took vengeance, wiping out the Czech village of Lidice, leaving 5,000 bodies behind.

Good use is made of the exteriors of Prague, which today is the prettiest city in Europe though not so back then, and of Barrandov Studio, one of the largest in Europe. (See my article on the studio at http://www.filmjournal.com/barrandov-back-lot).