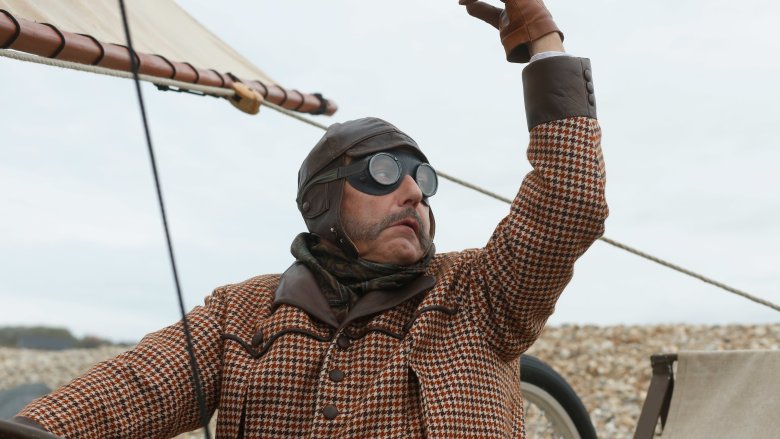 Photo from the film “Slack Bay”.

Before “Slack Bay,” director Bruno Dumont’s led an episodic TV series L’il Quinquin which takes off on the finding of human parts inside a cow, so we know more or less what we’re in far with his latest film, “Slack Bay,” whose original French title, “Ma Loute,” is taken from the name of a principal character.  A short while earlier, Dumont’s “Humanité” treats the rape-murder of an 11-year-old girl in a quiet French village, the police detective unable to feel emotions because of the death of his own family members in an accident.  This time, Dumont has gone completely into absurdism, as “Slack Bay” incorporates class conflicts, surreal flights of fancy, a thinly disguised mockery of organized religion (reflecting, perhaps, his own atheism), and the strange things that happen on vacation that might make you think twice when your neighbor tells you that his own holiday was a totally upbeat, happy time.

In fact, all of the characters in “Slack Bay” are strange, some because they make meals of the bourgeois tourists who take their weeks off in Pas-de-Calais (the director’s birthplace as it happens), others who because of inbreeding are a bizarre lot which would be the first to be pitched out if a United Airlines vessel were overbooked.

The Van Peteghems take their annual holiday at their lavish summer home on the Channel Coast in the year 1910, looking forward to a few weeks of relaxed living, their food needs assumed by their maid, Nadège (Laura Dupré).  The extended family includes the shrill Aude Van Peteghem (Juliette Binoche), who marvels at the local color of the hard-scrabble locals who make their living scraping mussels from rocks and carrying tourists across a small body of water for 20 centimes a hike.  A police investigation headed the keystone cop Alfred Machin (Didier Después), an enormously rotund fellow who needs help from sidekick Malfoy (Cyril Rigaux) in getting up whenever he falls on the beach.  You can assume that Dumont was inspired by Laurel and Hardy for these police characterizations. Tourists have been disappearing, though we in the audience are ahead of them as soon as the long-term residents are offered a human foot for dinner.

Among the rich family, Bille Van Peteghem (Raph) enjoys dressing as a boy, hunchback André Van Peteghem (Fabrice Luchini) and his wife Isabelle (Valéria Bruni-Tedeschi) are even more oblivious than the police detectives, and Ma Loute (Brandon Lavieville) carries on a romance with his social “better” Bille. By the time André’s sister Aude has given her enthusiastic comments about the local color, whooping as though on a ride in a French Disneyland rather than an isolated beach, they begin to grate on audience nerves.  Pratfalls are common, and their reverse—a literal rising from the ground by two of the characters—appear a climactic note, though Dumont cannot compete with Monty Python for absurdist laughs, at least with an English speaking audience.

The tenderness of the young people in love at first sight contrasts with the shrill tones of the clueless guests and incompetence of the detectives to make for a cinematic experience that is an acquired taste.  Then again, the film was shown at the Cannes Film Festival, so who are we in New York to cast aspersions?