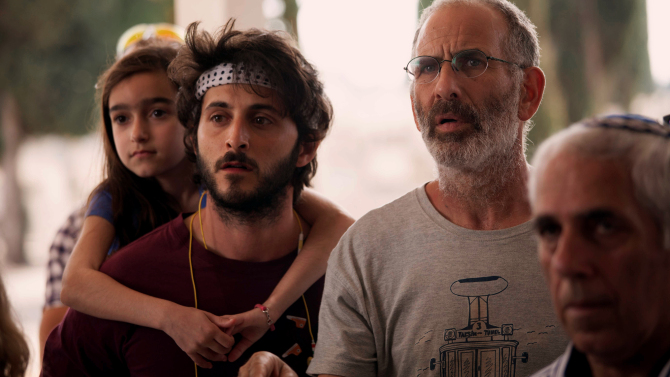 Photo from the film One Week And A Day.

Jewish burial customs are different from those of all other faiths.  Judaic law requires that upon death, a body must be buried within twenty-four hours, Sabbath and Holy Days excluded.  At the same time, a week is set aside for shiva, a mourning period attended by the immediate family and friends of the departed.  In Orthodox circles, people observing shiva sit on low stools or boxes to symbolize that they are “brought low,” and customarily visitors to the house of the bereaved take food as well.  Asaph Polonsky’s dramedy, in part the kind of comedy that will bring smiles rather than laughs to those who can appreciate his mumblecore-style dialogue, and the other part the facing of tragedy, opens on the day after the shiva in the home of Eyal Spivak (Shai Avivi) and his wife Vicky (Evgenia Dodina). Most of the time, you’d hardly know that the couple’s son Ronnie had died at the age of twenty-five after a stay at a hospice.  Presumably sitting shiva allowed the couple of grieve and for Eyal to distract himself by playing ping pong.

As with many films of this sort, dramedies if you will, the first segments will be comic while sadness seeps in during the latter sections.  Eyal, whose part is played by Israeli comic Shai Avivi, who might remind you of Larry David of the TV series “Curb Your Enthusiasm,” does not laugh, he rarely smiles, and appears to sit in judgment on everyone.  He complains that his next-door neighbors, Shmulik (Sharon Alexander) and Keren (Carmit Mesilati-Kaplan) are like rabbits, their copulation sounds disturbing, as the houses are spaces just a few meters apart.  Their son Zooler (Tomer Kapon) is a live wire, a delivery boy who is fond of his two neighbors.  He rides a bike on errands but is not afraid of trashing the scooter just to have an excuse to remain with Eyal and to teach him how to roll the medicinal weed Eyal stole from the hospice that housed his late son.  In the one burst of energy in this generally shaggy dog story, Zooler performs a wild, solo dance to some heavy metal music, pretending to play his guitar while jumping over tables and landing on the couch.

On her side, Vicky, who spends most of the picture disapproving of her husband’s experiments with marijuana (he has to hide the bag he stole from the hospice inside his fly) and wonders how her husband and the young neighbor who frequently visits have anything in common.  The only time any character cries occurs when Vicky is in the dentist’s chair trying to balance x-ray adhesives in her mouth, while the whole episode takes on the tone of sadness when they discover that the burial plots they wanted to reserve for themselves next to their son’s have been taken by another.

This is the sort of film that might make some in the audience wonder whether it’s a comedy or a drama, but any experienced moviegoer will realize that like our own lives off screen, we could be laughing one moment, crying the next not unlike babies.

The movie does not go beyond its natural limits in time, is frequently delightful and may even cause some in the audience to shed a tear—particularly those of us who have lost people near and dear.  That their son died of cancer rather than in the military makes the story even more poignant.  The most heart-wrenching moment occurs in the cemetery as another funeral is being performed, the mourner singing a mournful prayer for the dead.

In Hebrew with English subtitles.