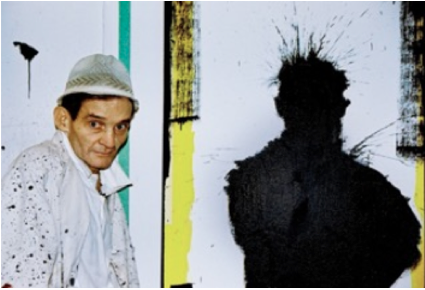 Black and white footage opens the films, as it harmoniously leads us to the colourful scene of the eighties. ‘Shadowman’ depicts the tousled portrait of artist Richard Hambleton. His life demonstrated how public art had no boundaries in the way it could affect society.

Director Oren Jacoby intertwines the story of Banksy’s precursor with the tale of a City. The storytelling shows the way New York’s neighbourhoods morphed through the decades, how Uptown and Downtown underwent a metamorphosis in terms of reputation and society.

During the decade of rad, Richard Hambleton was a spectre in the night who painted hundreds of startling silhouettes on the walls of lower Manhattan and, along with Keith Haring and Jean-Michel Basquiat, sparked the street art movement. But he never attained the fame of his fellow artists, unlike them he abstained from the Andy Warhol social scene. Richard Hambleton was thus neglected by the art market, as drug addiction and homelessness took over.

The movie empathetically plunges the viewer into the chaotic life of a forgotten artist. It further builds expectations as we observe his comeback, when in 2009 Hambleton suddenly resurfaced, supported by two young art dealers working with Giorgio Armani.

This cinematic voyage down a rabbit hole is at times exhilarating, but there are also elements of predictability along the way. However that is part of the journey of life, contrarily to fiction there are moments of foreseeable happenings. Hence the documentary captures the mood of reality, both surprising and calculable. ‘Shadowman’ skilfully accentuates the upward and downward spiral of Hamilton’s Odyssey, accentuating his undaunted desire to paint.