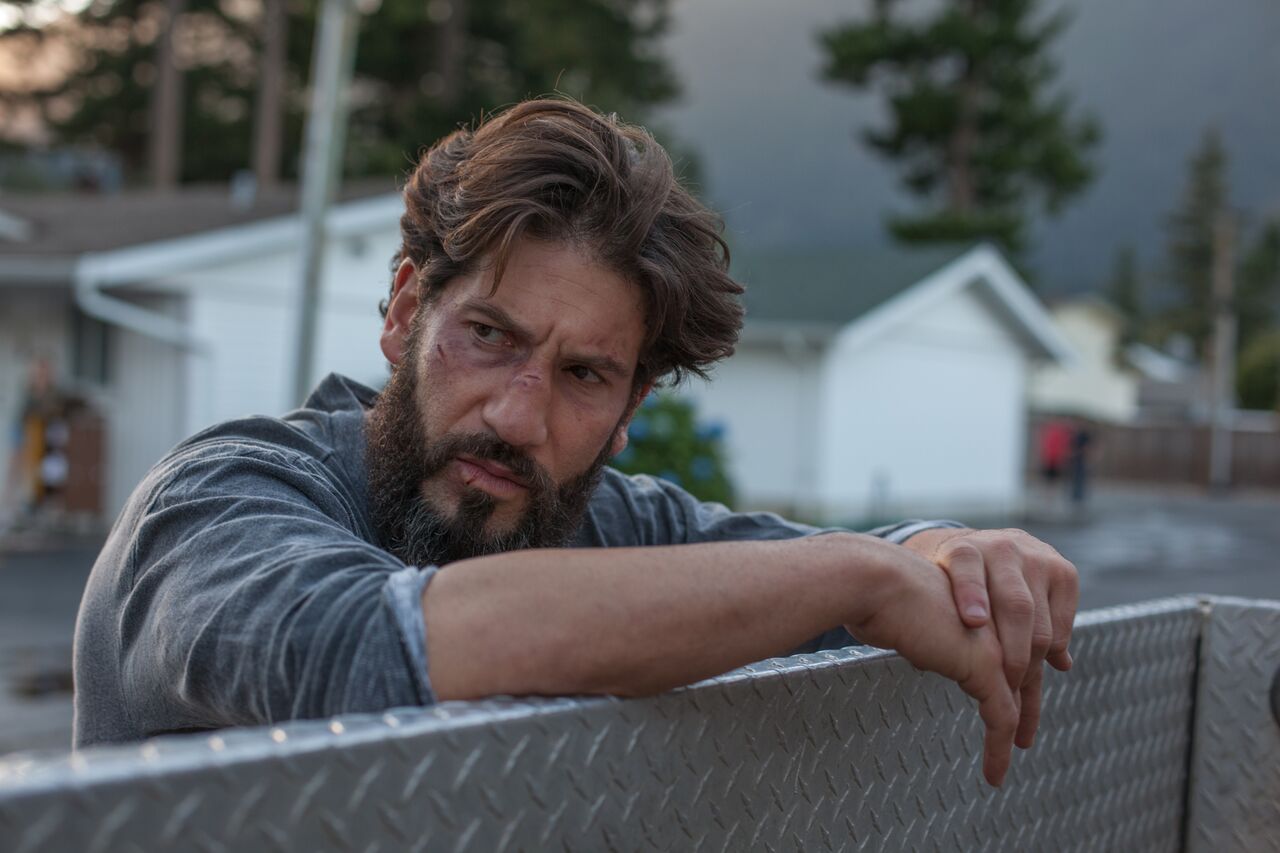 Even the most reluctant heroes must implicitly face and battle the pain of their past, in order to combat and defeat the unpredictable predator that’s currently preying on their neighborhood. That’s most certainly the case for the averse protagonist in the new thriller, ‘Sweet Virginia.’ Actor Jon Bernthal’s main character in the movie is learning how to contend with his troubled soul and personal demons, in order to stop his community from falling, and unraveling, under the spell of the predator, any further.

Jamie M. Dagg directed ‘Sweet Virginia,’ which was written by The China Brothers, Benjamin and Paul. The drama had its World Premiere on Friday night in the Spotlight Narrative section at New York City’s Cinépolis Chelsea during this year’s Tribeca Film Festival.

‘Sweet Virginia’ follows the residents of a small Alaskan town as they’re rattled by a burglary-homicide. The aftermath of the crime leaves lasting consequences on several of the citizens, most particularly two women who are made widows by the homicides, and their mutual friend, Sam (Bernthal), who’s a loner, despite working as the proprietor of the local motor lodge.

Around the time of the crime, a tightly wound drifter, Elwood (Christopher Abbott), checks into the motel. Elwood’s imposing physical presence conceals a troubled soul. But Sam, who’s a former rodeo champion, is all too eager to leave his troubles, including the violence of the ring, behind. So when a stranger like Elwood reaches out to him, reluctance is his natural response.

But the duo is ultimately bound together by their outsider status, so Sam and Elwood ultimately strike up an uneasy friendship. Their bond turns into a dangerous association that will set off a new wave of violence and unleash Sam’s darkest demons.

After attending ‘Sweet Virginia’s World Premiere screening, Bernthal and Dagg generously took the time yesterday to sit down for an exclusive interview to talk about filming the thriller at Manhattan’s Smyth Hotel. Among other things, the actor and director discussed how they were initially drawn to the fact that the film focuses on a giant moral gray area, and what morally ambiguous characters who are imperfect do in stressful situations. Bernthal and Dagg also expressed their appreciation over being able to freely and creatively discuss Sam, Elwood and the other characters’ journeys together during the rehearsal and shooting processes.

The conversation began with Dagg explaining what it was about the overall screenplay that attracted him to direct ‘Sweet Virginia.’ The filmmaker divulged that he “received the script in November 2015. I immediately saw something in The China Brothers’ writing, and thought it was a really strong foundation for a movie to stand on.”

Dagg added that “I think I responded well to the idea that the film is a giant moral gray area, as I like morally ambiguous characters. These are a group of people who are imperfect, and are ultimately dealing with love, life and death.” After being initially drawn to the characters’ moral ambiguities, “we started casting everyone, and focusing on what was really important within the characters and story.”

Bernthal then chimed in on what interested him in playing Sam, and how he became involved in starring in the drama. “It’s interesting-when I first read the script, which I received from a production company that I had worked with before, the role was written for a man in his mid-60s. But I still read the whole script, and loved it. I saw Jamie’s previous movie (the 2015 thriller, ‘River’), and thought, I would love to do this.”

The actor laughed when he admitted, “I wanted to be in the film, but didn’t think it would work with a guy in his late 30s…I felt like the tone of this character was more for a guy who’s a little bit more broken in, and is settling in and giving up a bit, and living quietly. I think there was something that’s honest about that for a 65-year-old man.”

Bernthal added that “I think that anytime you find the core problem within a story, or in attacking a character, you focus on that. Since that scared me so much, and didn’t think that was right (for a man of my age), it made me want to play this character even more. I then started talking to Jamie…

“…and he asked me, ‘Are you sure that you want me to play this?,” Dagg revealed with a laugh.

“But he was so awesome about it, and he challenged me to work my ass off,” the performer revealed. The director “was so confident, and unbelievably smart. We really thought about how we could achieve the tone of this character, which was originally suited to fit a 65-year-old guy. So that’s when we came up with the idea that (Sam) would have Early Onset Parkinson’s Disease, and that he would smoke the marijuana to deal with that.

“In the scene where he goes to quiet the rowdy guests, the script said that he beats the sh*t out of that guy. But we came up with the idea to switch that,” Bernthal divulged. He added that he appreciates how “Jamie gave me the freedom and encouragement” to change some aspects of the character.

“I think that at the end of the day, (Jamie’s) not the type of filmmaker to just have (Sam) be this tough guy who just goes after the bad guy. I’m extremely grateful for this opportunity, because it’s different than anything else I’ve gotten to do before,” the actor sentimentally revealed.

“It’s so important to cast the right people. When you do, it makes your job as a director so much easier,” Dagg explained. “Chris was the first person who came on board. Elwood, as a character, was originally written as a smooth-talking cowboy. He wore cowboy boots and drove a Mustang, and used flowery language.”

The casting department suggested Abbott to the helmer, who had seen the actor’s work on ‘Girls.’ Dagg admitted that at first, he didn’t think the performer was right for the role in the movie, even though he gave a solid performance on the Emmy Award-winning comedy-drama series.

The casting department then asked the director if he had seen Abbott’s performance as the title character in the 2015 drama film, ‘James White,’ and he said no. “I then watched ‘James White,’ and I thought, holy sh*t, this is the guy,” Dagg revealed with a laugh. Abbott “really brought a lot to the movie. Again, that goes back to the casting-if you give your actors the freedom to really explore their characters, and move away from what’s on the page,” it really helps bring the story to life.

When it came time to cast DeWitt’s role of Bernadette, the filmmaker explained that when Sam was originally written to be a 65-year-old man, he wanted to cast an actress who was age-appropriate. “So we began looking at people who were older than Rosemarie. When we then cast Jon, it opened up more freedom to look at actresses who were younger. Rosemarie then went to the top of my list.

“When we were in pre-production, and about a week-and-a-half away from starting to shoot, (the casting department) said that Rosemarie liked the script, and wanted to talk to me in about half-an-hour,” Dagg shared. “She’s so natural, and was invested in her character.”

Once the actors were cast in ‘Sweet Virginia,’ they didn’t have much time to rehearse together before filming began, since it was made independently. “But everyone was making this film for the right reasons. This movie meant a lot to everyone,” Bernthal noted.

The helmer then jumped in and emphasized that having such little rehearsal time was actually better for a smaller movie like this one. “We had in-depth conversations, and went through every single line and restructured stuff. But there was also a spontaneity that allowed us to try things out on set. That allowed us to capture magical stuff,” Dagg admitted. “I think if we had a larger budget, and rehearsed for more than a month, that would have killed” the mood between the cast, which Bernthal agreed with.

The actor added that “The process was really just us sitting down together on a porch, and discussing things with Jamie. That really helped us get to know each other, and know how our minds thought.”

The filmmaker then divulged that Bernthal was cast as Sam a few months before they began principal photography. “So we’d speak every couple of weeks, and throw some ideas around during a quick conversation. That gave us some time to digest the new ideas. There were some things that I was a bit apprehensive about at first, but I’d change my mind after thinking about them.”

The performer then added that “Jamie was very respectful towards our ideas. He never slammed our thoughts down…The rehearsal process was good, and I enjoyed it.” Bernthal also revealed that he rehearsed with Abbott the least. “He gave such a tour de force performance. I don’t think you can know what Sam and Elwood’s relationship is going to be until Sam took the time to hear Elwood.

“I trusted Jamie and Chris to just show up, and let whatever was going to happen, happen. That’s my favorite way of working-you have to open your heart, eyes and ears, and just be in the room with them. (It doesn’t work) to try to label things and say, ‘This is what this part means.’ How do you prepare for that, and know what the other guy is going to do?,” the actor also passionately expressed.

“I had no real idea what was going to happen at first,” Dagg admitted. “I thought, there’s so much resting on this character. After the first take of the first dialogue scene between you (motions to Bernthal) and Chris in the diner, I thought, these guys seem like they really know each other. It just worked!”