Tye Sheridan’s limitations are tested in the chilling revenge thriller, ‘Detour,’ which is set to be distributed on home release tomorrow. The drama is set to be unveiled on Blu-Ray, DVD and Digital HD from Magnolia Home Entertainment, under its Magnet Releasing label.

In celebration of ‘Deotur‘s home release, Shockya is offering two lucky winners a Blu-ray, and one lucky winner a DVD, of the thriller. To enter, email, us at ShockyaGiveaway@aol.com. Let us know that you’re entering to win the ‘Detour’ Blu-ray and DVD giveaway in the email’s subject line and message. You have until next Monday, May 1 to enter, and you can enter the contest once daily. After the thriller’s release date, we’ll pick the winners at random and notify them through email. Good luck!

‘Detour’ was written and directed by ‘Triangle’s scribe and helmer, Christopher Smith. The drama was an official Selection of last year’s Tribeca Film Festival, before it was distributed in select theaters, as well as On Demand, on Amazon Video and iTunes, last January.

Magnet Releasing has unveiled the following synopsis for ‘Detour’:

Harper (Tye Sheridan), a seemingly naive law student, obsesses over the idea that his shifty stepfather, Vincent (Stephen Moyer), was involved in the devastating car crash that left his mother hospitalized and comatose. Overwhelmed by anger, Harper agrees to a deal proposed by Johnny (Emory Cohen), a grifter he meets at the bar who offers to murder his stepfather. The next morning, Johnny and his friend, Cherry (Bel Powley), arrive at Harper’s home to follow through with the deal. Harper must accept the offer, or take matters into his own hands. Full of deception and murder, the trio becomes involved in their own schemes to gain personal satisfaction on a road trip where there is no turning back. Using a split-narrative structure that leaves viewers guessing, it’s never quite clear who can be trusted.

The special features that are included on ‘Detour’s discs are the theatrical trailer, deleted scenes, interviews with Smith and Sheridan, and a special look inside the making of the film, which is titled ‘A Detour with the Cast & Crew: The Characters & Filmmaking.’ The thriller will be available on Blu-ray for $29.98, and DVD for $26.98. 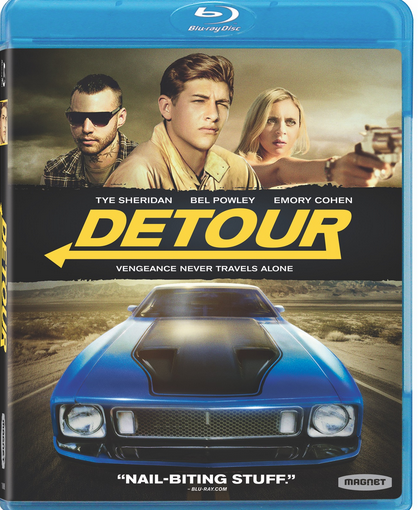