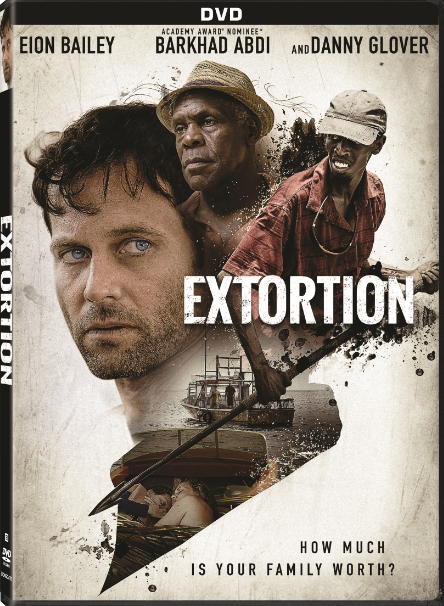 Saving the ones they love is turning into a fearless race for survival for the actors and filmmakers of the new action movie, ‘Extortion.’ The thriller, which is bringing the cast and crew closer together in a time of crisis, is set to be released on DVD, Digital HD and On Demand this Tuesday, May 16 by Lionsgate Home Entertainment.

In honor of ‘Extortion’s home entertainment release, Shockya is premiering a special features clip, which is titled ‘Working with Phil Volken.’ The video features several of the cast members, including Oscar nominee Barkhad Abdi and Eion Bailey, as they talk about collaborating with Volken, who wrote and directed the adventure movie. The trio discusses the process of shooting a police chase on the water, and the logistics of filming the scene on a speed boat.

Bailey revealed that the crime drama’s cinematographer, Helge Gerull, sat with the actors in the boat. That left the only place for Volken to sit was on top of the boat, which is where he would yell his direction to the cast. Bailey praised the efforts of the helmer, who added that the experience was both difficult and exciting. Abdi also commended Volken by calling him a very good man and someone he truly respects, because of all the hard work he put into making the action film.

Lionsgate Home Entertainment has released the following synopsis for ‘Extortion’:

At a Caribbean resort, Kevin Riley (Elon Bailey) and his family take a carefree boat ride that turns tragic when they’re stranded on an island. Near death, they’re rescued by a local fisherman (Barkhad Abdi) who demands a million dollars, then vanishes. Riley must race to find his dying wife (Bethany Joy Lenz) and son on an unknown island before their time runs out. Also starring Danny Glover, ‘Extortion’ shows that even paradise can be deadly.

What other material does the ‘Extortion’ DVD special feature section include?

Extortion’ will be available on DVD for the suggested retail price of $19.98.