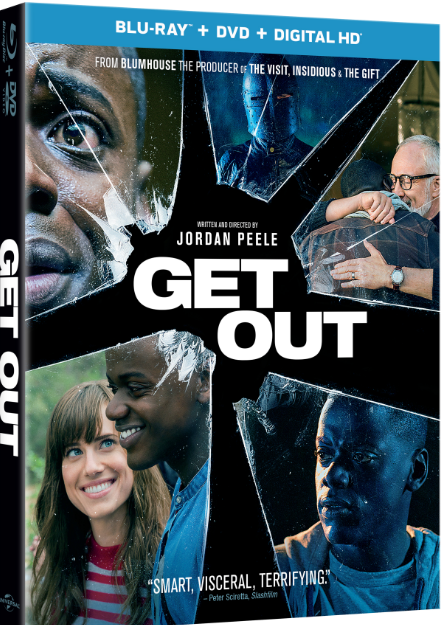 Shocking ethical conflicts are surprisingly still lurking in plain sight in modern American society. Those menacing and realistic social dangers are the powerful sources of tension in the new horror movie, ‘Get Out.’ The compelling struggles that are plaguing the main characters in the film will surely make viewers question who the true heroes are, and who should get out.

The thriller, which is now available on Digital HD, is also being distributed on Blu-ray, DVD and On Demand next Tuesday, May 23 by Universal Pictures Home Entertainment. In celebration of ‘Get Out’s home release, Shockya is offering one lucky winner a Blu-ray of the horror movie. To enter, email, us at ShockyaGiveaway@aol.com. Let us know that you’re entering to win the ‘Get Out’ Blu-ray giveaway in the email’s subject line and message. You have until the thriller’s home release on May 23 to enter, and you can enter the contest once daily. After May 23, we’ll pick the winner at random and notify them through email. Good luck!

‘Get Out‘ comes from the mind of Jordan Peele, who’s the first African-American writer-director to garner $100 million at the box office with his debut film. The break-out hit has maintained the acclaimed record of being the best reviewed movie of 2017 on Rotten Tomatoes since it’s theatrical distribution on February 24, partly because it explores relevant social topics in modern day society.

‘Get Out,’ which premiered at this year’s Sundance Film Festival, follows Chris (Daniel Kaluuya), a young African-American man, and his girlfriend, Rose (Allison Williams), a young white woman, who have been dating for several months. She invites him for a weekend getaway upstate at her family’s Upstate New York home to meet her parents, Missy (Catherine Keener) and Dean (Bradley Whitford). At first, Chris reads the family’s overly accommodating behavior as nervous attempts to deal with their daughter’s interracial relationship. But as the weekend progresses, a series of increasingly disturbing discoveries lead him to a truth that he could have never imagined.

What bonus features are included on ‘Get Out’s Blu-ray and DVD?