Life often presents powerful opportunities for people to change their perspectives on such important issues as how to embrace important relationships and love career decisions. But often times, people unfortunately don’t truly embrace those prospects until they’re faced with harrowing circumstances, and must reconsider their life path. In the semi-autobiographical drama, ‘D-Love,’ first-time feature film director Elena Beuca showcases how a chance meeting with a drifter was the compelling motivator that she and her husband, Dave Rogers, needed to further advance their relationship and careers.

This year’s Dances With Films festival included ‘D-Love’s World Premiere during its Features section on June 3 at TCL Chinese 6 in Hollywood. The cast and crew reunited on the red carpet before the premiere, and also participated in a post-screening Q&A together to discuss the drama.

‘D-Love’ follows a married couple, Stefania and Dan Michaels (Beuca and Rogers), who return home to Los Angeles after what was supposed to be a calming vacation actually created more tension between them. Stefania is upset that she has been the sole financial provider for their home over the past few years, especially since her high-demanding boss has given her nothing but stress. She’s also dismayed that her husband has become increasingly reclusive since the deaths of his parents and her brother several years earlier. He doesn’t appear to be motivated to relaunch his entertainment career, reconnect with their friends or have children of their own.

So when a vagabond, who goes by the title nickname D-Love (Ditlev Dharmakaya), asks the couple for a ride to the busiest freeway in the city after they meet at LAX, Stefania doesn’t want to have anything to do with him. But much to his wife’s horror, Dan offers to bring the wanderer back to their home, as D-Love figures out what he wants to do next as he travels across the U.S.

Stefania is initially wary of allowing a total stranger, who seems more interested in exploring America for a few months as he visits from Europe, than settling down, making money and starting a family, into their home. One of the couple’s closest friends, Shaun (Billy Howerdel), also begins to question D-Love’s motives, as well as the impact he has on Dan. But once Stefania sees how positively influential D-Love actually is on her husband, she also begins to accept his ideals, and realizes that happiness doesn’t always come from always fitting into society’s exact ideals.

Beuca generously took the time recently to talk about writing, directing, starring in and producing ‘D-love’ during an exclusive phone interview. Among other things, the filmmaker and actress discussed how after she and Rogers met Darmakaya in real life a few years ago when they truly offered him a ride from LAX, she was inspired to adapt their friendship into her first feature as a director. Beuca also expressed her gratitude that the drama had its World Premiere at Dances With Films, as she appreciates the opportunity to be able to share it with her peers and friends at such a vital festival for independent movies.

The director began the conversation by revealing what interested her in helming ‘D-love,’ and what the overall experience of making her first feature was was like. “Well, I’ve directed a couple of short films and television episodes before. So I would say that directing a feature film is no different than directing a short, except that a feature is much longer,” the filmmaker revealed. “I would say the challenge of making this movie was directing, producing and starring in it, because we had to work within a tight schedule,” she also divulged.

“But I come from an acting background, so working with other actors as a director felt natural to me. I’ve always had the ability to talk to actors, and get what I need from them, emotionally. I’m much more of an emotionally-driven director than a technical one,” the helmer shared.

Beuca then discussed what the experience of collaborating with Rogers on the story for the movie was like as he wrote the script, and how much of the story is based on their real-life experience with Darmakaya. “Well, this story actually happened to us, and is based on a real event. We met Ditlev a few years ago, and I was very impacted by him. He really helped Dave and I change our perspectives,” she admitted.

“As soon as Ditlev left, I wrote a short story about our experience,because I really wanted to remember the feelings I had. Then a couple of years later, I started talking to my husband, and I said, ‘I really want to direct my first feature,'” the filmmaker shared.

So the couple started thinking about what type of story she should focus on in the movie. “I then came across the short story, and I said, ‘We’re going to make a feature film about this.'” But since Beuca isn’t a feature writer, Rogers decided to pen the script for ‘D-Love.’

During the process of crafting the screenplay, the couple learned a lot about each other, the director revealed. “My husband and I have been best friends since we met 10 years ago. Thankfully, we have that friendship as a base, since I had to be his boss on this, in a way. It wasn’t always the easiest thing, though, since not only is this the first feature that I directed, but it’s also the first feature that he has ever written. So we had to work to make sure we were on the same page, and tell the story in the best way possible,” Beuca acknowledged.

“Even when we disagreed, which did happen throughout the process, we asked, what is the best approach for the film? So it’s very interesting to work with your best friend-husband, and you’re his boss,” the helmer confessed with a laugh.

Beuca then spoke about how in addition to writing and directing ‘D-love,’ why Rogers and she decided to also star in the film together. “When we decided to make the movie, we didn’t know if we should cast a star, even though everyone said we should. But what was most important to me was to cast the real vagabond we met four years ago in the movie. When we decided to cast Ditlev, we knew that since he didn’t have any acting experience, so he wouldn’t be comfortable with anyone else,” the filmmaker disclosed. “He’s comfortable with my husband and me, because he knows and trusts us.”

Once Beuca, Rogers and Darmakaya began acting together, the director explained that she “wouldn’t push Ditlev more than he can handle. I wanted to get the best performance from him, but I also wanted to make sure it was real. Also, we didn’t have a lot of time for rehearsals, as he was only in the country for two weeks to make the movie. So he wouldn’t have had time to meet other actors and get to know them enough to become comfortable enough to work with them. Since he was working with Dave and me, it was easier for Ditlev to be himself.”

Beuca added that “Since my character of Stefania is much tougher and guarded than I am, I would act as Elena off-screen. That way, I would get the best performance from Ditlev on-screen, as he would be reacting to me, and not someone who didn’t like his character.”

Since ‘D-Love’ was shot independently over a short shooting schedule, Beuca and the crew decided to film the scenes in the Michaels’ house first. Many of Darmakaya’s scenes were shot during that time, which was an experience that the filmmaker described as being “very easy. As long as he could be himself in front of the camera, it was an easy process. Ditlev’s one of our best friends now, and he trusts my vision.”

Beuca also revealed why she decided to not only star in and direct ‘D-Love,’ but also serve as one of the producers on the independent drama. “Since this was my project and we’re not big names, no one would really jump on board and say, ‘Let me produce it.’ I knew that if I wanted this movie to get made, I had to do all the work. Once I accepted that, I embraced it. I then spent the past year-and-a-half working on all aspects of producing the movie, from pre-production, shooting it and editing it,” she noted. The helmer added that she “learned a lot during this process, and I’m grateful for the lessons that I learned during this process.”

The filmmaker added that Darmakaya “actually (saw) the movie for the first time at the premiere.” Further speaking of how ‘D-love’ had its World Premiere at the Dances With Films festival, the filmmaker noted that she was both excited and nervous to be able to attend the screening. “I’m excited because we’re going to have our friends and people who know me as an actress. But I’m also nervous, because it’s such a vulnerable thing, since I made the movie as as both an actress and director. But I’m beyond grateful to be accepted to Dances With Films, and I appreciate the opportunity to be able to share it with our peers and friends.” 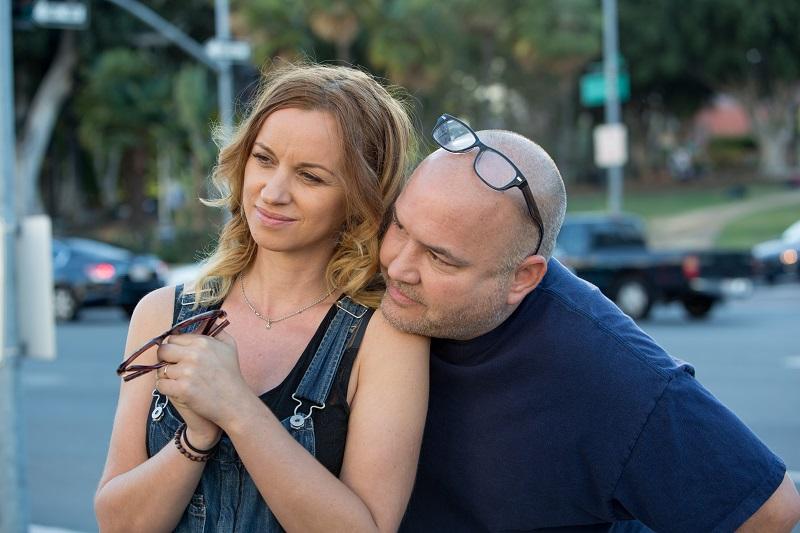