Ice-T is making history again, as he’s scheduled to appear as the featured in-studio guest tomorrow morning on ‘The Howard Stern Show.’ The appearance will mark the first time the iconic musician will be interviewed by the notorious DJ on his popular radio show. Audiences can listen to the conversation at 9AM EST, and then tune-in then to SiriusXM‘s Howard 100 channel to hear the rapper’s life story.

During the chronicling of Ice-T’s interview and biography, new tracks from Body Count‘s latest album, ‘Bloodlust,’ which was distributed in March, will be played. Ice-T and his heavy metal band will also be supporting the release of their sixth studio album at Chicago Open Air on July 15, where they’ll perform a full set.

Body Count initially garnered attention in the early 1990s, when they released their renegade song, ‘Cop Killer.’ The track evoked controversy amongst politicians, parents and law enforcement officials across America, who cited concerns that the gangster-metal collective was promoting anti-police sentiment. 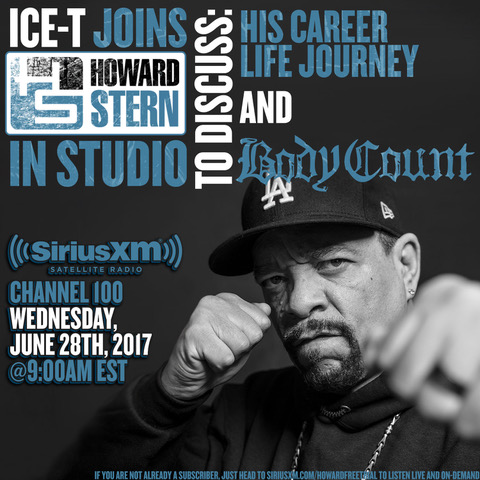