What Does Domino Look Like in Deadpool 2? Ryan Reynolds Reveals First Look Photo

Ryan Reynolds‘ zany sense of humor helped infuse the often serious superhero film genre with a much-needed eccentricity last year in his critical and box office hit, ‘Deadpool.’ The actor is already promising that there will be no shortage of offbeat wit in ‘Deadpool 2,’ the anticipated sequel to the 20th Century Fox movie, which is based on the Marvel Comics character of the same name. Reynolds, who’s also serving as a producer on the second installment, has revealed the amusing first look image of Zazie Beetz, who is bringing Domino to life in the upcoming screen adaptation.

The actress’ character poses in an amusing stance that mocks one of the first, and most well-known, promotional photos that Reynolds appeared in for the original ‘Deadpool.’ Beetz’s picture introduces her into the ‘X-Men’ film universe.

Reynolds posted the picture of Beetz in her Domino costume on Monday via Twitter. The photo of Domino features her laying on a rug in front of a fireplace in her costume. She’s laying on top of Deadpool, who’s wearing his signature red outfit, in a comically sultry pose that matches the title superhero’s stance in his solo picture. Based on what Reynolds’ character is wearing in the newly released first image of Beetz as Domino, the lead character’s costume in the new film will remain true to what he dons in the comics.

In addition to Domino, ‘Deadpool 2’ will also introduce another fan favorite character from the X-Men comics, who is finally making his on-screen debut. Josh Brolin is set to portray Cable in the follow-up movie. In the comics, Domino, who’s the alter ego of Neena Thurman, has worked with Cable and the Merc with a Mouth several times, and has become a member of the X-Force team.

Not much is known yet about the plot of ‘Deadpool 2,’ which was written by Rhett Reese and Paul Wernick, who also penned the movie’s predecessor. Drew Goddard, who has penned such films as ‘Cloverfield‘ and ‘The Cabin in the Woods,’ also contributed additional material to ‘Deadpool 2’s script. The upcoming superhero sequel is being directed by ‘Atomic Blonde‘ helmer, David Leitch.

Filming on the ‘Deadpool’ follow-up began earlier this summer in Vancouver. In addition to the teaser image of Domino, Reynolds has also shared other photos from the set, including the Merc with a Mouth outside the X-Mansion, as well as Blind Al, who’s being played by Leslie Uggams, filming her scenes. 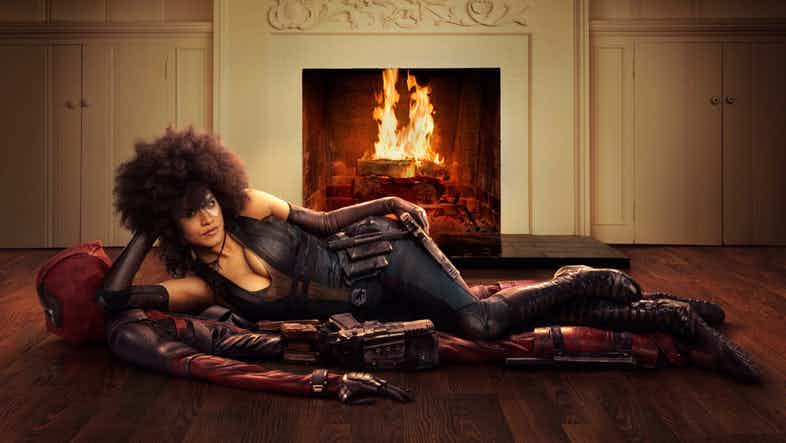