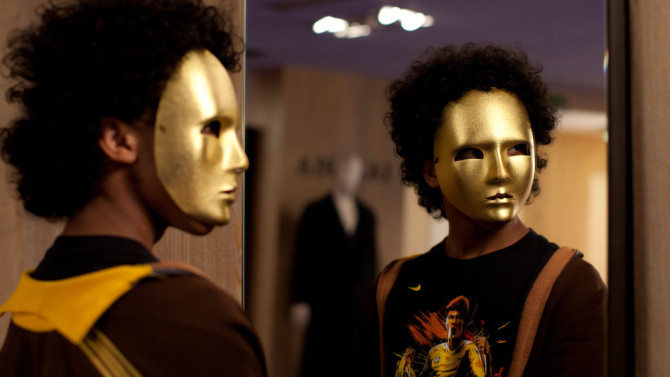 Photo from the horror movie Nocturama.

In his movie two years ago, “Saint Laurent,” Bertrand Bonello unfolded a view of the world-famous designer at the peak of his career, from 1967 to 1976. Bonello now offers a narrative film, “Nocturama,” that could almost be predicted as a follow-up, since his characters appear to worship at the throne of bourgeois capitalism. Yet these young people, men and women, are doing things that make us in the audience believe that capitalism would be the last system they bow down to, considering the acts of terror that they inflict on buildings and people in Paris. These millennials are terrorists, but not in the form we generally consider, i.e. motivated by a radical Islamic hatred to Western society. In fact, we don’t know why they act as they do, even when one of them says midway, “It had to be done.”

“Nocturama,” the name deriving from the place that zoo animals are kept at night, may or may not refer to the actions of this band of revels without a known cause when they patronize a luxury department store, La Samaritaine, hiding out until after the store’s clothing they spend the wee hours of the morning. Bonello, who wrote the script as well as directing, has no problems with long takes, the camera focusing on this motley band of pals beginning in the Paris Metro. The station and its train could arouse the envy of the four million New Yorkers who travel by subway amid screeching trains, endless announcements to “see a suspicious package, tell a cop or an MTA employee.” Inside the Paris metro, there is only the whispered voice on the speakers announcing each station.

From the looks of these anarchists, we perceive that something momentous is about to happen—and theater-goers should note that the explosions taking place in major buildings precede the terrorists attacks even before the Charlie Hebdo shooting in January of 2015. The group drop packages here and there, including one at the HSBC bank shortly after TV newscasters note that the London-based bank is to lay off 50,000 employees. Explosions go off almost simultaneously including one that creepily burns the golden statue of Joan of Arc as though recreating the French heroine’s execution. With all TV stations describing the events, the rebels hole up in the department store, playing music on the Bang & Olufsen high end speakers, its dramatic and bursting sounds selected by Bonello, who is also a musician.

The rebels indulge in the toys, including a car that one of them takes for a spin around the floor; the clothing, including wedding dresses that cause one of the women to dream of a future that may never exist; the food and wine. In one case a fellow strips, gets into a bathtub and indulges in cognac. There is a rendition by one gent lip-synching to Paul Anka’s “My Way.” A married, homeless pair are invited into the store to indulge in all the bourgeois accoutrements.

We are left to wonder: what is the connection between the bombings at the HSBC bank, the Interior Ministry and the statue—and the actions of the group in the department store? No doubt Bonello will be asked endlessly at interviews what motive he hand in mind, and equally likely he will never give that information. Perhaps it’s not important to know the reasons, the closest guess being that some want their fifteen minutes plus of fame, dragging along their friends who would not want to be considered dorks.

While most of the film indulges in conversations, making “Nocturama” not at all the typical action-adventure movie, there are a few passages of extreme violence which, given the time spent at the often comic playing-at-rich antics comes as a surprise. This, then, is about terrorism, except that it is not; and it’s about rebellion, when we hardly know why. It’s the kind of film that regardless of our ignorance of motives causes us to gape at and never to look away.