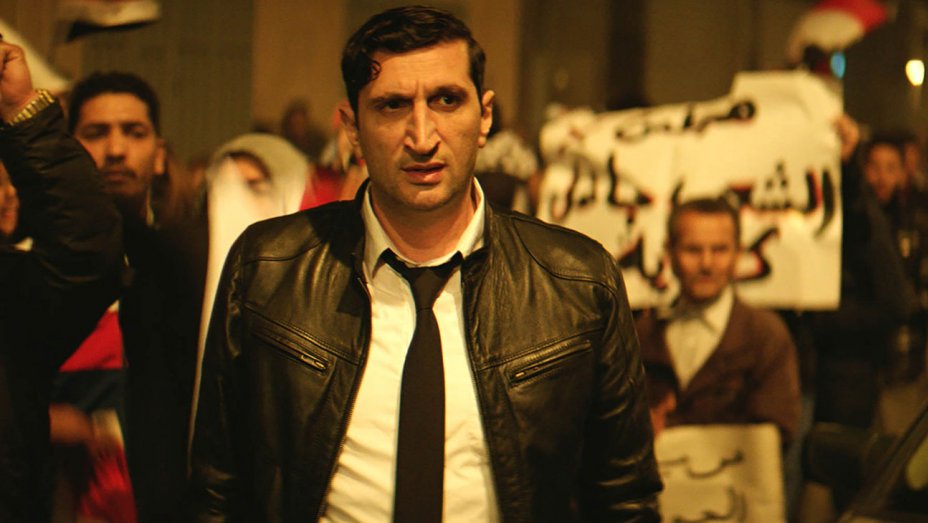 Photo from the film The Nile Hilton Incident.

When Shafiq (Ahmed Seleem), a developer who is also a member of parliament, tells a cop, “Do you think this is Switzerland? There’s no justice here,” what place do you think he’s talking about? Even if you had ten guesses you might not pick the right place given the corruption that is endemic in many parts of the world. Tarik Saleh’s tale of mendacity, where the rich get away and the little guys get killed, happens to be Egypt. And come to think of it, Egypt’s capital looks nothing like Geneva, either. Cairo, as filmed in “The Nile Hilton Incident,” would look something like Beijing one of the world’s most polluted capital cities, but given the mosques, the soulless buildings, the third-world streets, is the perfect location for a noirish detective story, in many ways not unlike “Chinatown,” and what’s more Saleh and his excellent cast creates the mood of a fable, an allegorical look at the bleakness in one of the many sordid corners of the world.

All revolves around Noredin (Fares Fares), a chain-smoking police major about to be promoted to colonel by his uncle, Kamal (Yasser Ali Maher). Noredin hungers for justice, even while despairing that there is little of that in his country. Yet he is no choir boy, having pilfered some cash at the scene of the crime, even pocketing a bribe offered by the manager of the Nile Hilton where the murder took place. The only witness to a murder, Salwa (Mari Malek), is a cleaning woman who sees the perpetrator, and barely gets away from the scene where she would have been murdered herself. Noredin, who sees that Salwa is the key to a successful prosecution of a bigwig developer, encourages her to testify, even protecting her from forces who would think of nothing of taking out anyone who might bring them down.

Noredin himself cannot break away from the beautiful singer and prostitute, Gina (Hania Amar), a friend of the murdered woman Lalena, who worked under a pimp named Nagy (Hichen Yacoubi). Nagy would secretly photograph Lalena’s clients for blackmail. Noredin, still grieving for his wife who died in a car accident, cannot tear himself away from Gina, asking if he could see her again, perhaps even knowing that a well-placed bribe would end any investigation of his own indiscretions.

The picture ends with scenes from the Cairo uprising in Tahrir Square which eventually led to the expulsion of Hosni Mubarek, who as his country’s leader must take responsibility for running a place with a justice system not on a par with Switzerland’s (to say the least). This is an effective story that is happily light on melodrama, one in which the audience would not be too concerned about who actually did the killings but rather on why so little is done to prosecute the criminals.