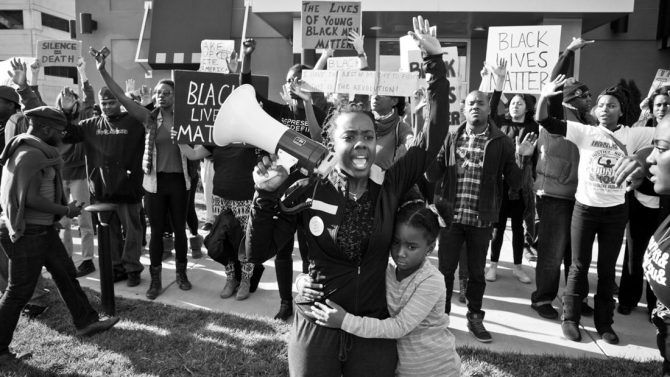 Photo from the film Whose Streets?

It is the right of the people to petition the government for redress of grievances, and that is just what the (mostly) good people of Ferguson, Missouri did for five nights in August of 2014. Michael Brown, a young black man and resident of the town within St. Louis County, was shot and killed by police officer Darren Wilson Surprisingly little discussion of background takes place in this documentary, the debut of Sabaah Folayan and Damon Davis, who direct and wrote the film. This is a significant omission, as many moviegoers in a potential audience may not know the details. Suffice it to say that Mr. Brown, an 18-year-old African-American, was shot to death by Officer Wilson, the 28-year-old cop responding to a robbery and assault in a convenience store in which Brown was accused of shoplifting cigars, shoving the manager aside, and heading outside. According to the officer, there was a struggle, with Brown trying to wrest the policeman’s gun. The weapon discharged, wounding Brown who fled. When Brown allegedly confronted the officer he was shot. The grand jury refused to issue an indictment.

The documentary thankfully does not rely on talking heads, with interviewers sitting on one chair and respondents on the other, recounting stories that had taken place at some earlier time. Instead, the documentary filmmakers were in the streets in the midst of the demonstrations, as some of the crowd protesting Brown’s killing broke away, smashing the large window of a department store, and indulging in looting.

While avoiding a reliance on sterile interviewing, “Whose Streets?” director of photography Lucas Alvarado-Farrar descended into the streets during demonstrations, shouting matches, and some restrained calls for action, in an area that could have doubled for a war zone in Iraq or Afghanistan. Police officers from the town responded in riot gear, lobbing tear gas at the crowd, threatening with barking dogs eager champing at their leashes to sink their teeth into humanity. Only then did the governor call out the National Guard, while both President Obama and his attorney general state that this would remain a local, state-wide matter having nothing directly to do with them.

Hostility breeds hostility, violence breeds violence. There must be a better way to handle protests that sending out the militia, which act as though they were under fire from snipers on Falluja rooftops. But the film does not delve into that speculation. Nor is there a feeling of continuity, despite the chapters into which the doc is divided, each chapter bearing a quote by spokespersons Maya Angelou, Frantz Fanon, and Martin Luther King. Full use is made of social media, specifically twitter, Instagram, and Facebook to give people around the world almost instant coverage of yet another disaster that appears to prove that black lives matter, but not to the police. And not to grand juries either, which have refused to indict others who in the name of the law have inflicted death upon unarmed black people.

One cannot help notice the absence of white people in the protest marches, though some appear during later events to hear speakers and to applaud the voicing of protests. Like “Detroit,” which opened a week earlier, dealing with the murder of three African-Americans in the Algiers Motel while the Michigan National Guard patrolled the streets, “Whose Streets?” is a film that can serve even decades from now as more evidence that our democracy, especially under the current administration in Washington, is selective upon whom it applies.