Initially embarking on a journey out of duty may ultimately lead to a meaningful discovery of a person’s true character, as they’re forced to consider how to contend with unexpected conflict. That emotional and physical battle against opposing forces is explored in the title crusade in director Brendan Muldowney‘s new historical drama, ‘Pilgrimage.’ The adventure movie showcases how both the filmmaker, as well as his latest story’s protagonist and his allies, had to grapple with turmoil and compromise in order to achieve their goals during their respective expeditions.

‘Pilgrimage‘ had its World Premiere at the Tribeca Film Festival this past April. RLJ Entertainment is now set to release it in theaters and On Demand and Digital HD this Friday, August 11.

Set in the year 1209, ‘Pilgrimage’ follows a Cistercian monk, Brother Geraldus (Stanley Weber), who arrives on the shores of Ireland. His mission is to convince a local order of Gaelic-speaking brothers to surrender their Holy relic to him, which he’s tasked to bring back to Rome. The relic is important to the church, as it reportedly caused the death of an ancient Irish saint. Geraldus wishes to use the relic as a source of righteous power for the Vatican, which hopes to begin another Crusade for Jerusalem. Even though the Irish monks don’t want to comply with Geraldus’ wishes, they still reluctantly agree to accompany him back to Italy.

Brothers Ciaran (John Lynch), Cathal (Hugh O’Conor), Rua (Rúaidhrí Conroy) and Brother Diarmuld (Tom Holland) are chosen to escort the relic on its title pilgrimage to Rome. During their journey, it’s revealed that Diarmuld is the novice of the group, but all he’s ever known was his abbey. But he also one of the worldliest members, as he’s one of the only Brothers who values the order’s quiet manservant, who’s simply referred to as the Mute (Jon Bernthal), as an actual human being.

The brothers are aided in the journey when they meet Raymond de Merville (Richard Armitage) and his Norman knights, who traveled to Ireland in hopes of finding glory. The expanded group is still unable to escape Ireland, however, as they’re faced with new enemies. Their foes, including Gaelic warriors, are tracking the group, in hopes of obtaining the relic. The reality of the unforgiving landscape and their new enemies begins to clash with the holy men’s divine plans, and makes everyone question how they can survive.

Muldowney generously took the time to sit down for an exclusive interview during the afternoon of the adventure drama’s premiere at the Tribeca Film Festival. Among other things, the filmmaker discussed how he decided to direct ‘Pilgrimage’ because he’s friends with screenwriter Jamie Hannigan, who pitched him the idea for the drama, and they collaborated on the story’s development. Muldowney also mentioned how he was happy that the movie premiered at the New York City-based film festival, as he was looking forward to watching it with a public audience.

ShockYa (SY): You directed the new period drama, ‘Pilgrimage.’ What was it about the script, which was written by Jamie Hannigan, that convinced you to helm the movie? How would you describe your helming approach on the film?

Brendan Muldowney (BM): I knew (Hannigan) for a long time from the filmmmaking community, and he was also friends with (this movie’s) producer. We’re also friends, and he used to call in on a Sunday morning when he was in town, and asked if I wanted to get a cup of coffee.

During those times we met, he would tell me about his story ideas. I remember him telling me this idea he about monks traveling across Ireland in the 13th century. They were carrying this holy relic, and they were ambushed. That was as much as he had. But I liked the idea of the location, setting and period, so that was the initial start. So I said, ‘Okay, great, give me more.’ He later came back to me with all of these other stories and ideas about the relic and the thirteenth Apostle.

SY: Once you signed on to direct the movie, what type of research did you do into the lives of the Irish monks who lived during the thirteenth century?

BM: (Hannigan) did most of the research, as he went to libraries and read books upon books. He would paraphrase things as he filled me in on the different ideas. They would either make it into the script or they wouldn’t, as I would tell him whether or not I liked an idea.

When we then started making the film, I had to do a lot more research, and I would ask him what books to read. But since I couldn’t read everything, he did a great job of writing backstories for the characters. He put a lot of his research into five pages for the entire cast. So I read those backstories, and he also told me that there were a few books that I should read. Plus, I learned a lot about Irish history while I was in school, so this subject wasn’t completely new to me.

SY: The adventure drama features an impressive ensemble cast, including Tom Holland as The Novice – Brother Diarmuid. What was the casting process like for the movie?

BM: It was a combination of our casting director (Daniel Hubbard) and (production company) XYZ (Films) putting together lists of people they suggested. At the time, Tom wasn’t Spider-Man yet, but he had been in ‘The Impossible.’ I had watched him in that film, as well as in ‘How I Live Now,’ which is a post-apocalyptic movie. I said I would love to talk to him, because he was great. After I did speak with him, I offered him the role.

We then began to build upon Tom’s casting. I have to give credit to the casting director and XYZ, because they had good suggestions. With the Irish cast, we were able to hire the best actors.

SY: Once the actors were cast in ‘Pilgrimage,’ were you able to have any rehearsal time with them, in order to build their characters’ backstories and relationships?

BM: I would communicate with everyone, but every actor’s different. I would email or talk on the phone or over Skype with the actors. But I didn’t have a lot of face-to-face time with them, though. We didn’t start working together in person until they arrived in Dublin, where we spoke for about two weeks before we moved to other areas of Ireland to start the shoot.

The actors were doing stunt work and costume fittings every day before we began filming, and we really had a chance to talk to each other then. But they were all doing their own preparation before they arrived on the set. Tom was learning Gaelic, the Irish language. So there was a lot of preparation that was being done outside of me talking to the actors. I let them know that they could drop me an email whenever they had a question. So it was all about teamwork.

SY: Speaking of the stunts, what was the process of working with the actors on their physicalities and the way that they should be presented on screen?

BM: Well, the monks in the film had to look like the real monks from the time. Jon’s character had been a crusader, so we had a bit of leeway of what he would wear. The film’s costume designer (Leonie Prendergast) came up with the idea of how he would look, and I thought it was a good look.

SY: The adventure drama offers a viscerally violent dissection of faith, fear and the critical occasion where they meet. What was the process of finding the balance between how much of the violence to show throughout the monks’ title pilgrimage throughout the Irish countryside, along with their faith and commitment to their lives’ work?

BM: We did go overboard with the violence-we took it pretty far! (laughs) The film turns into an action chase about halfway through. But I think that helps offer insight into the motivations into the characters, and why they’re doing what they’re doing.

I often find that action and violence is more satisfying when there’s proper grounding. I feel like you have to earn the ability to go to a higher level of violence…If you don’t have restrictions, like trying to reach a wider audience, violence should look messy, and it shouldn’t be bloodless. The descriptions of violence in this film were actually in the script. So I just thought, okay, I can do it!

SY: ‘Pilgrimage’ was filmed on location in Ireland and Belgium, like you mentioned earlier. What was the process of shooting the drama in the two countries? Do you prefer filming in real locations?

BM: We were on location for the majority of the shoot. We spent four weeks in Ireland, and two weeks in Belgium…The weather in Ireland can be strange. We had one week of weather where it shouldn’t have been so sunny. A lot of those scenes were cut, because they were slowing down the beginning of the film. But I’m also glad they’re gone, because they were making the landscape look too pretty.

We also had a storm on the very first day of shooting. We couldn’t go into the water some other days because the storm came back, which made the waves too high. So we were at the mercy of the weather. If we saw a storm was coming in, we’d have to go underneath shelter, and we’d wait 15 or 20 minutes, until it passed, and we’d then start shooting again.

SY: ‘Pilgrimage’ (had) its Premiere during the Viewpoints section of this year’s Tribeca Film Festival. What has the experience of bring the thriller to the festival been like so far?

BM: Well, you make films so that people can see them. But the flipside is that people will say what they really think about it. I’m really proud of it, and I’m really looking forward to having an audience see it (during the premiere screening). I don’t always sit and watch my films (with an audience), but I’ll sit and watch (‘Pilgrimage’ during the premiere screening), because I’m looking forward to seeing the reaction.

SY: The period drama is also set to be released in theaters, as well as on VOD and Digital HD, on August 11. Do you feel the On Demand platform is beneficial for independent films like this one?

BM: I think the whole distribution model is changing so much these days that I can’t always keep track of it. I’m a filmmaker, so I think about making the stories. When it then comes to how they’re released on the different platforms, it’s really up to the distributors. (laughs)

To be honest, I just think it’s good if people get to see films on any platform. I love going to the theater, but I really grew my love of film as a child, when I watched obscure movies on late-night television. So to me, the medium isn’t as important as the stories. 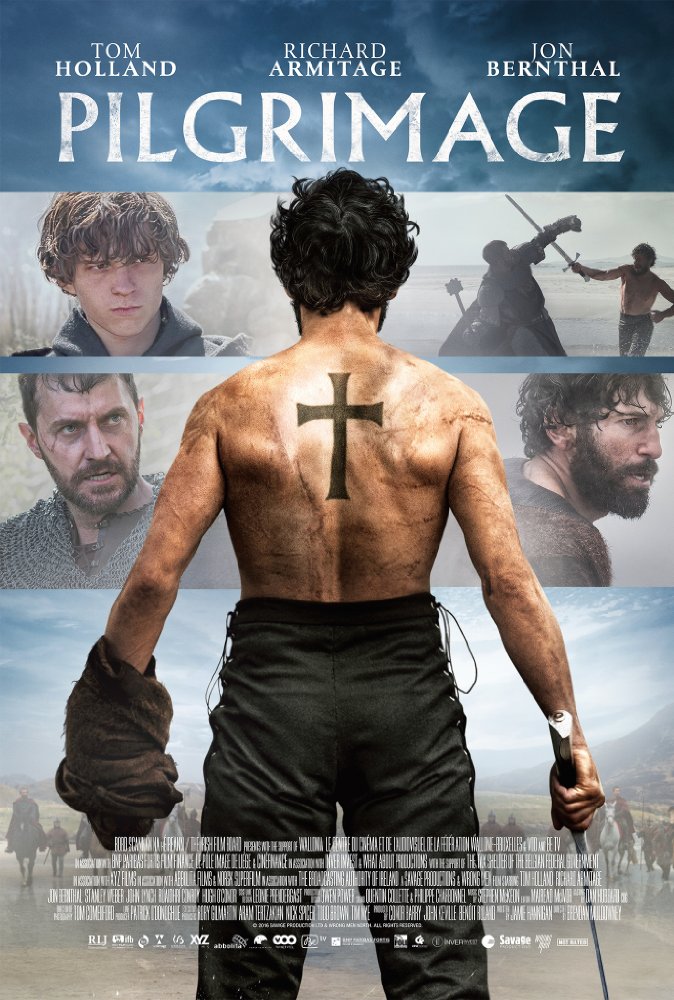