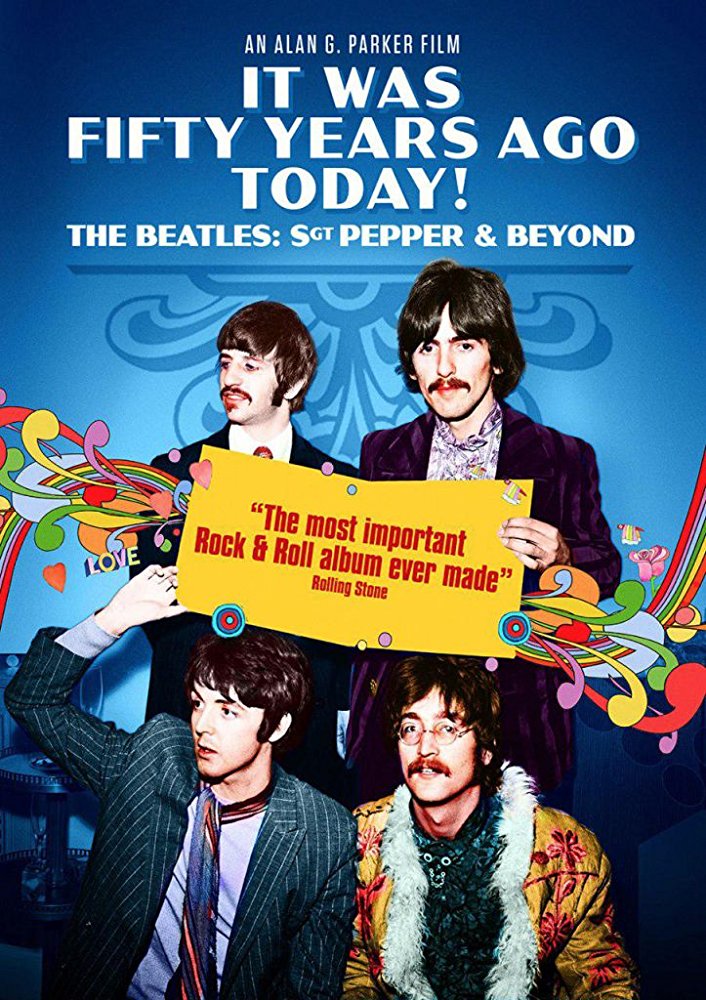 The poster for director Alan G. Parker’s documentary about The Beatles, ‘t Was Fifty Years Ago Today Sgt Pepper and Beyond.’
Photo Courtesy: The Orchard

The Beatles continuously pushed the boundaries of what could be achieved in popular music worldwide. That was never more evident than when they decided to stop touring in 1966, and instead focus on creating music’s first concept album, ‘Sgt. Pepper’s Lonely Hearts Club Band,’ which was released the following year. In honor of the record’s fiftieth anniversary, the documentary about the occasion, ‘It Was Fifty Years Ago Today! Sgt Pepper and Beyond,’ is set to be released in America. Shockya is exclusively premiering a clip from the film to help celebrate its distribution.

The video, which is titled ‘1966, The Beatles Tour of America,’ features new and archived interviews with people who knew, and write about, the band. One of the interviews in the clip is with renowned Beatles author, Philip Norman, who noted how the musicians always absorbed so much emotion. Barbara O’Donnell, who served as the secretary to the Beatles’ manager, Brian Epstein, and also worked at the record label the group founded, Apple Records, also appeared in the video. She admitted that her boss was worried about the musicians’ trip to U.S., since the group was so internationally renowned.

‘It Was Fifty Years Ago Today! Sgt Pepper and Beyond’ is set to be release in the U.S. on DVD and VOD on September 8 by The Orchard. The distribution comes after the documentary’s theatrical release in the UK.

‘It Was Fifty Years Ago Today! Sgt Pepper and Beyond,’ examines the year 1967, which would become the most crucial in the band’s career. It was the year in which they stopped being the world’s number one touring band, and instead became the world’s most innovative recording artists. They pushed the boundaries of what could be achieved in the studio.

Unable to hear themselves perform and mired by controversy, the band decided to stop touring in August 1966. What followed was a period of extreme creativity and rebirth, during which they embraced Swinging London, the avant-garde, LSD and the advent of the Summer of Love. The result was the creation of their new alter ego, Sgt. Pepper, and the desire to create a pop music first, the concept album.

A devoted fan since the age of nine, Parker set out to explore the period during which the concept album was recorded by filming interviews with former employees, fellow musicians, family member and journalists, all of whom were there at the time. Their stories are in turn supported by a vast array of archival footage, much of which hasn’t been seen since first transmission. The result is a detailed examination of why the band stopped touring, how the album was conceived and its recording at EMI’s Abbey Road Studios, its lyrics, the creation of its sleeve and its release. The material is set against a background of the band’s changing relationship with Epstein and the tragedy of his death, as well as the creation of Apple and the powerful influence of the Maharishi Mahesh Yogi.

Of ‘It Was Fifty Years Ago Today! Sgt Pepper and Beyond,’ Parker said: “We’re combining first-hand accounts of the events that allowed ‘Sgt. Pepper’ to happen with rare and unseen footage that we’ve forensically unearthed from mainstream archives and private collectors. The last days of touring…the execution of the album…and the aftermath that it left behind will, I hope, give the audience an intimate sense of the band, the time and the impact of this extraordinary album.”

Shockya is premiering an exclusive clip from director Alan G. Parker's documentary on the Beatles, 'It Was Fifty Years Ago Today! Sgt Pepper and Beyond.'