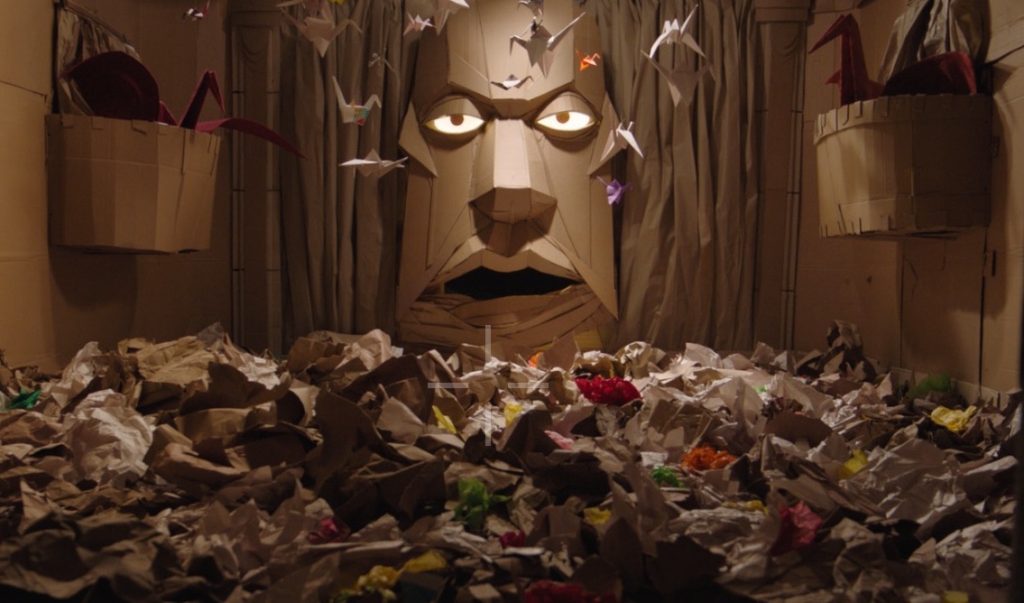 Photo from Dave Made a Maze.

Dave (Nick Thune, Bad Johnson) is a struggling artist living with his devoted girlfriend Annie (Meera Rohit Kumbhani, The Mindy Project). When Annie comes home from a business trip, she finds that Dave may have gotten distracted by building a cardboard labyrinth in their living room…and is apparently lost inside.

“It’s much bigger on the inside.” – Dave

Dave refuses to knock down the maze, and warns them not to attempt to rescue him; but he’s been in there for 3 days without food, water or a bathroom. Annie will not stand idly by, so she enlists the help of their best friend Gordon (Adam Busch, Rebel in the Rye) and their documentarian friend Harry (James Urbaniak, The Venture Bros.) with a film crew in tow to rescue Dave.  The problem with a magical cardboard labyrinth is that the rules of reality and physics do not apply. There’s a room that turns you into paper bag puppets, ornery origami, a throbbing vagina booby trap, and apparently you can just duct tape a towel to a door to thwart the bloodthirsty minotaur (John Hennigan, WWE).

The Bad: Not necessarily bad, but some of the bits got a bit eye rolling-ly silly (“You f—ed my wife”). The bits with Leonard (Scott Krinsky, Chuck) came across as the filmmakers not wanting to cut him out, so they kept a tired running gag.  They were funny at first, but it got a little dumb.

The Good: It was super fun, fast paced, good dialogue and characters. The visuals were so enthralling that I was able to sit through this entire film and not once look at my phone.

By dumpster diving, the filmmakers saved a hell of a lot on set design; however much respect to those who were involved in the construction. Each room of the labyrinth was absolutely wondrous. The concept itself is fairly ingenious. The violence and gore are safe for all ages since it’s just red confetti and streamers (adorable!).  There’s a little something for everyone, and it was also a relatable love story for those of us who know the pains of loving an artist.

ACTING: B
STORY: A
TECHNICAL: A
TOTAL RATING: A
REVIEWED BY: JM Willis