Finding the right person to guide them through life can be a challenging process for many people. While some leaders ultimately prove to be extraordinarily invaluable to the group they’re mentoring, others eventually demonstrate how menacing they truly are to their followers. That distinctive difference is powerfully showcased in the new thriller, ‘Inconceivable,’ which is set to be distributed on Blu-ray (plus Digital HD), DVD and Digital HD this Tuesday by Lionsgate Home Entertainment. In honor of the film’s home entertainment release, Shockya is premiering an exclusive clip from the special features.

In the clip, which is titled ‘Slice of Life,’ lead actor Nicolas Cage and his co-star, actress Nicky Whelan, praise the work ethic of ‘Inconceivable’s director, Jonathan Baker. The Academy Award-winning actor notes how the helmer kept insisting that the drama feel as though it’s a real slice of life, as he doesn’t want viewers to be able to guess what was going to happen next in the story. Cage also reveals how enthusiastic Baker was on the set, and how sincere he was about the material. Whelan also shares that she appreciated how the director encouraged the actors to find their own way through the script while they were filming.

‘Inconceivable,’ which is currently available On Demand, is set to retail for $24.99 for the Blu-ray, and $19.98 for the DVD. The Blu-ray, DVD and Digital HD special features include commentary with Baker, a behind the scenes featurette and deleted scenes.

The thriller was written by Chloe King. In addition to Cage and Whelan, ‘Inconceivable’ also stars Faye Dunaway and Gina Gershon.

Lionsgate Home Entertainment has release the following synopsis for ‘Inconceivable’:

A family befriends a struggling single mother and invites her into their home to be their nanny, and, eventually, their surrogate mother. But soon, strange behavior begins to surface and they realize that things are not what they seem, and that the woman they’ve entrusted their lives to may have other intentions. 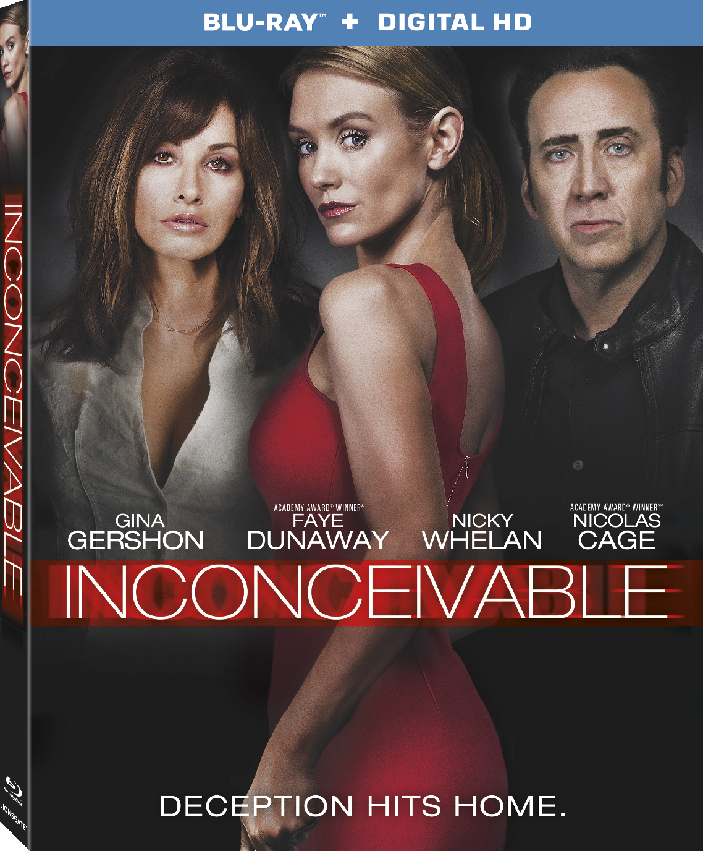