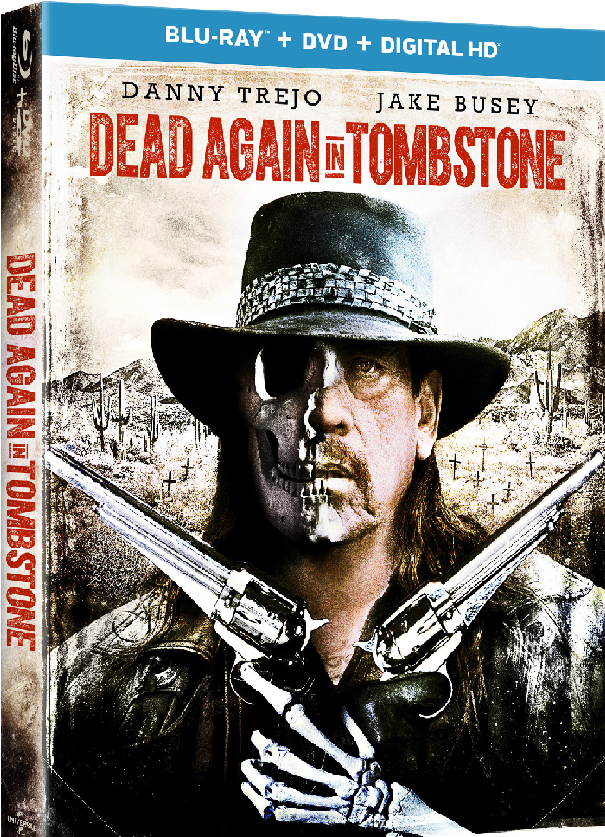 Danny Trejo is returning from the dead again, and this time it’s as the devil’s outlaw and reluctant servant, in the new western sequel, ‘Dead Again in Tombstone.’ The actor is reprising his role as the series’ infamous gang leader, Guerrero de la Cruz, in its latest installment, after he appeared in the 2013 original movie, ‘Dead in Tombstone.’ The film is set to debut on Blu-ray, DVD, Digital HD and On Demand next Tuesday, September 12 from Universal Pictures Home Entertainment.

In honor of ‘Dead Again in Tombstone’s home release, Shockya is offering three lucky winners a Blu-ray of the drama. To enter, email, us at ShockyaGiveaway@aol.com. Let us know that you’re entering in the email’s subject line and message. You have until the film’s home release date to enter, and you can enter the contest once daily. After September 12, we’ll pick the winners at random and notify them through email. Good luck!

‘Dead Again in Tombstone’s Blu-ray, DVD and Digital HD releases are loaded with exclusive bonus features, including a behind-the-scenes look at the making of the film with the featurettes, ‘Resurrecting the Western: The Making of Dead Again in Tombstone’ and ‘Home in Tombstone: Danny Trejo as Guerrero.’ The special features section also includes a deleted scenes montage and feature commentary with the filmmakers, including Reiné, Editor Radu Ion, director of photography Rolf Dekens, Wiley and Grid VFX CEO Jan Goossen.

The devil’s outlaw and reluctant servant, Guerrero (Trejo) returns from the dead again. Guerrero is forced to protect a stolen relic from getting into the hands of Jackson Boomer (Busey) and his gang of soldiers, but Jackson will stop at nothing to raise his comrades from the dead and bring the wrath of hell upon earth. Guerrero must use all his dark powers in order to defeat Jackson and find redemption…or die again trying.

For more information on ‘Dead Again in Tombstone,’ visit the action movie’s page on Universal Pictures Home Entertainment’s website, as well as the sequel’s Facebook page.