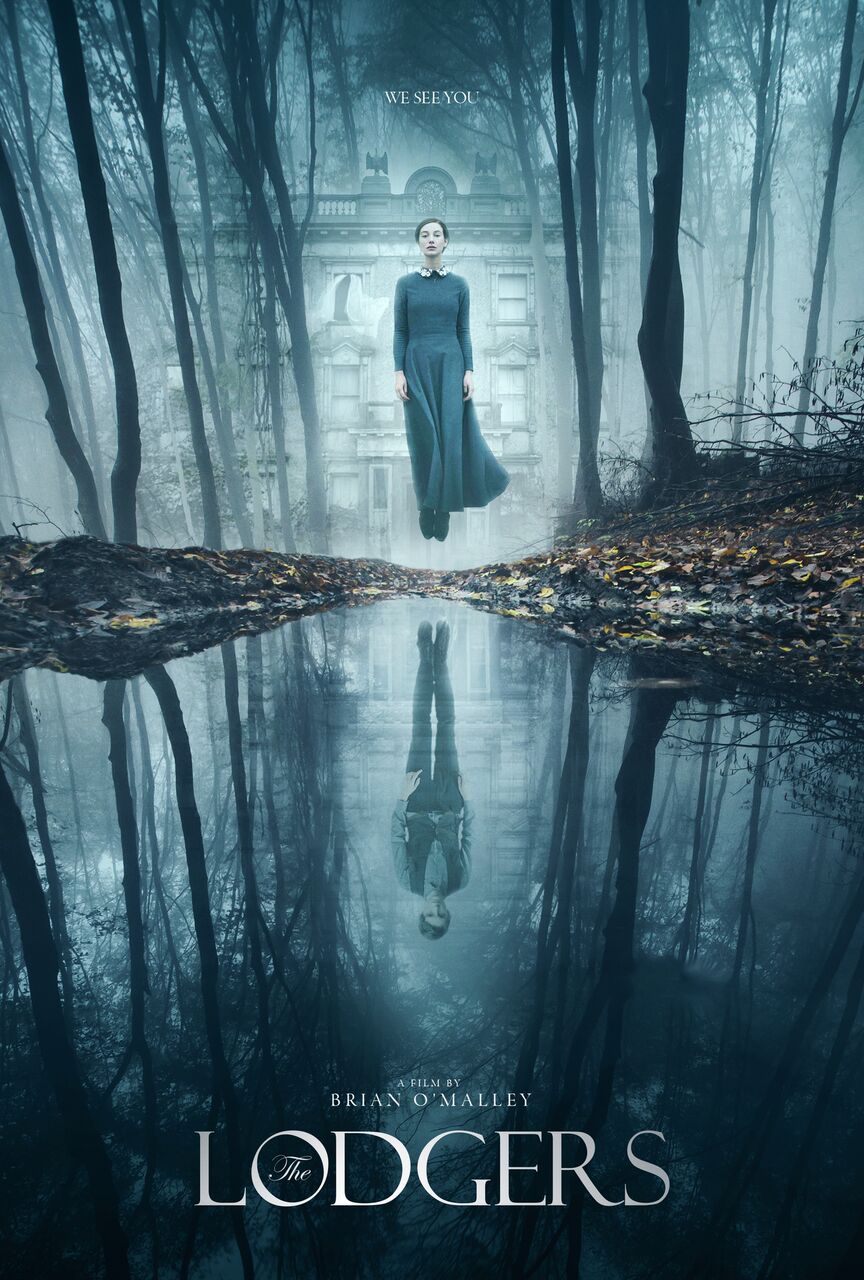 The official poster for writer David Turpin’s Gothic horror movie, ‘The Lodgers,’ which is having its world premiere at the 2017 Toronto International Film Festival.

Some of the most daring and thought-provoking horror stories are the ones who focus on audaciously strong-willed and complex female protagonists, who are desperately trying to escape their seemingly doomed fates. That’s certainly the case with the upcoming supernatural horror movie, ‘The Lodgers,’ whose female lead character possesses an edge of darkness that guides her to forgo her family legacy, and pursue her own desired destiny. The resolute protagonist stands firm in her beliefs against her timid twin brother, who maintains a relentless grip on their family’s history and home.

‘The Lodgers’ marks the feature film writing debut of musician and Gothic literature professor, David Turpin. The genesis for the drama began when he contacted his friends, including producers Ruth Treacy and Julianne Forde, at production company Tailored Films, and asked them if there was a particular type of movie that they would be interested in making together. Treacy mentioned that the company would love to create a Gothic ghost story, so Turpin came up with the initial pitch for ‘The Lodgers’ within a couple of days. The company then immediately bought it, and with the support of the Irish Film Board, the movie went into development.

Production on ‘The Lodgers,’ which was directed by ‘Let Us Prey’ helmer, Brian O’Malley, is now complete. It’s set to have its world premiere at the Toronto International Film Festival (TIFF) this Friday. The supernatural horror movie’s premiere will be held at Toronto’s Scotiabank Theatre, in cinema 3, and will begin at 7:15 pm EDT. After its world premiere, ‘The Lodgers’ will also screen a couple of other times at the festival, including on Saturday at 4:15 pm EST in Scotiabank 3, and next Friday, September 15 at 3:00 pm EDT in Scotiabank 11.

‘The Lodgers’ follows orphaned twins Edward (Bill Milner) and Rachel (Charlotte Vega), who reside in their family’s crumbling manor in 1920’s rural Ireland. Although they’re isolated on their estate from the rest of the world, they aren’t alone. They share the house with the title unseen entities, who control them with three strict rules. The guidelines include the twins being in bed, with their doors locked, by midnight each night. They also may never allow anyone to cross the threshold, or permanently leave the estate. If the siblings fail to abide by the regulations, they’ll feel the wrath of the entities, who reside below the manor.

As their 18th birthday approaches, the twins prepare to bear the crippling responsibility of their long held family tradition. But during the process, Rachel surprisingly begins to develop an attraction to Seán (Eugene Simon), a young man who lives in a nearby village, and recently returned from the First World War. As an Irish man who joined the British army, he understands the siblings’ feelings of being detached from his community, as his neighbors can’t comprehend his decision to fight with another country. Since they’re all considered to be outsiders within their own country, Rachel finds a kindred spirit in Seán, which leads her to ponder the possibility of a life beyond her family’s estate.

As Rachel fights to free herself from the despicable expectations of her ancestors, Edward fears for their souls at the hands of the Lodgers. With the estranging of his beloved sister manifesting itself in his physical degeneration, Edward withdraws into a lonely madness. Rachel then realizes that she must fight without the help of her twin, in order to escape their predetermined fate that’s bound by an illicit love, and create the life that she truly desires.

Turpin generously took the time recently to talk about penning the screenplay for ‘The Lodgers’ during an exclusive interview over the phone. Among other things, the scribe discussed how the idea for the film was prompted by a childhood fantasy he had, in which an entity lived in his family’s home. He also shared his appreciation that the horror movie is premiering at TIFF.

The conversation began with Turpin revealing that the idea for the story in ‘The Lodgers’ was inspired by a fantasy he had when he was a child. “I used to imagine that there was somebody else living in the basement of my family’s home,” the writer shared with a laugh. “I thought that if I didn’t go to bed, the being would come out of the basement. Like other children, I would scare myself, and imagine frightening things. So that was something that was always part of my childhood.”

The development of the script then began when the writer met with Treacy and Forde. “They mentioned that they were interested in producing a Gothic ghost story. Something about that reached into my subconscious and reawakened the fantasy that I used to have as a child. It started to play in my mind, so I began to think about it more. It then developed from there into the film’s core concept, which focuses on this brother and sister, who must share their living arrangements with something else that has malevolent plans for them,” Turpin divulged.

The process of working with Treacy, Fordek, the other producers and Tailored Films on bringing ‘The Lodgers’ to life was a gratifying one for the scribe. “I had a lot of creative freedom with this. The movie was supported by the Irish Film Board, and they gave notes and feedback, which was really constructive and helpful.” Turpin added that working with the producers, as well as with O’Malley, “was a very harmonious process.”

The writer also admitted that he didn’t know what to expect from the experience of working on the movie, since it was the first feature film screenplay that he penned. “I didn’t really know what the process was like. Before I started working on this, I had heard stories about how the process of script development was really difficult and painful, and there’s a lot of conflict,” the writer conceded.

“But I didn’t experience that at all. From an early stage, we agreed on the type of film that we wanted to make. When you have that same end goal in mind, you’re just left negotiating the paths that lead to it. Since we all wanted the same thing, the experience of making the movie was nice,” Turpin also acknowledged.

With ‘The Lodgers’ premiering at TIFF on Friday, the scribe expressed his enthusiasm of returning to Toronto, as he has visited the city since he was 15. “I have all of these hazy and romantic recollections of my time there…But it’s also a completely new experience for me to go to the festival, and I’m really excited about it,” Turpin revealed. He laughed as he jokingly added, “In terms of preparing for the festival, I have to get a decent pair of shows! I don’t have anything to wear!”