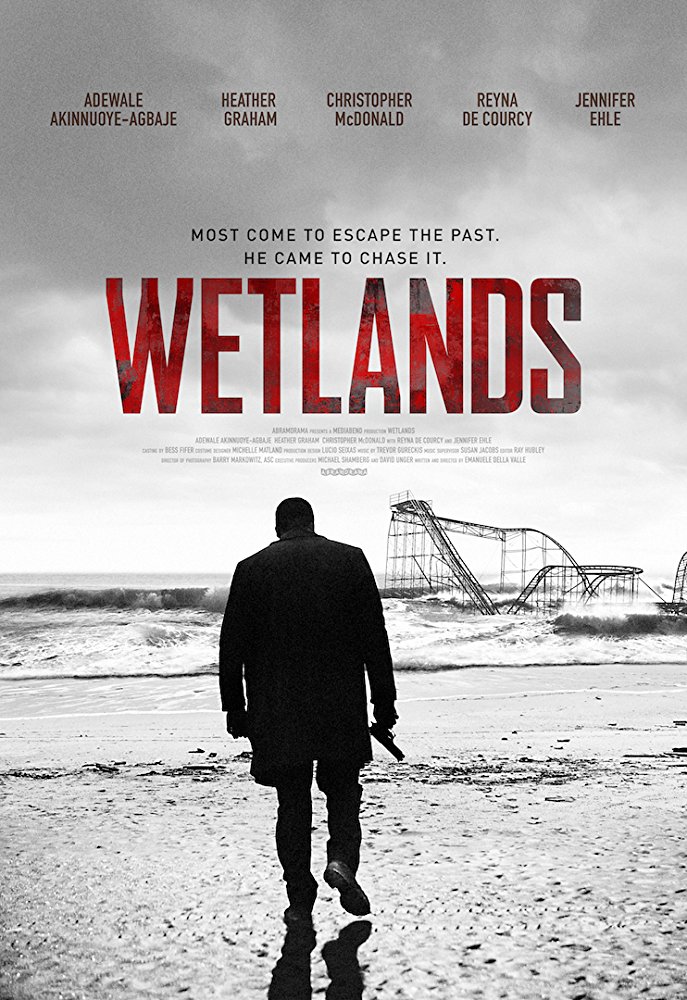 Embracing the glitz and glamour of big city culture is the captivating routine that many thriving lifestyle entrepreneurs enjoy as they flourish in their careers. But former fashion executive-turned-filmmaker, Emanuele Della Valle, is powerfully proving that observing affluent culture isn’t the only way to inspire enthralling work. The first-time feature film writer and director has moved from the charming allure of the lifestyle and fashion worlds to create a dark, twisting story in his new crime thriller, ‘Wetlands.’ The drama, which follows a city cop who’s determined to reconnect with his estranged wife and their teenage daughter, despite having to battle and overcome his own immense person demons, is now playing in select theaters.

‘Wetlands’ follows Babel “Babs” Johnson (Adewale Akinnuoye-Agbaje), a police detective who finds himself assigned to a new precinct in the title no-man’s land that surrounds Atlantic City. The region is within view of the once famed and fancy, but now dilapidated, hotels and boardwalk of the resort city, but is really a world away. Trying to adjust to the recent changes and move in his life is difficult for Babs. A year ago, he was a top officer and doting father and husband in Philadelphia, until mysterious circumstances intervened into his personal and professional lives.

When Babs relocates to New Jersey from Pennsylvania, he finds himself back in the lives of his estranged daughter, Amy (Celeste O’Connor), and still-bitter ex-wife, Savannah (Heather Graham). Babs soon finds himself becoming entangled in the lives of the locals of the Wetlands, including Surfer Girl (Reyna de Courcy), a surfboard builder who has dreams of moving to Hawaii to ply her trade; Kate (Jennifer Ehle), a news anchor at a small television station; and thug Jimmy (Louis Mustillo) and his boss, Lollipop (Barry Markowitz).

Teamed with a new partner, the fun-loving gambling addict Paddy Sheehan (Christopher McDonald), Babs must learn to adjust to life back on the force. Babs’ life is further threatened as the region prepares for a massive, late-season hurricane, which leads him to question whether the choices he has made in his career and relationships have been the right ones.

Della Valle generously took the time recently to talk about making his feature film writing and directorial debuts on ‘Wetlands’ during an exclusive interview over the phone. Among other things, the filmmaker discussed how he feels that the Atlantic City area has a large cinematic potential that has been largely unexplored, which, combined with his love for noir and crime literature and movies, inspired the crime thriller’s initial idea. The scriber-helmer also mentioned how he cast the drama in both Los Angeles and New York, and how he feels the performances is the highest quality aspect of the movie.

In honor of the crime thriller’s release, Shockya is also premiering an exclusive clip from the film. The video features Ehle’s character of Kate visiting the police station where Babs works, following a recent update she gave on the development of the storm. But instead of discussing the development of the hurricane with the officer’s superior, she questions her new friend’s boss about what kind of evidence he has to try to blame a local murder on Babs. The detective’s supervisor then tries to deflect the situation, and tell the newscaster she’s showing her true potential to make it as a successful reporter in New York. Kate nonchalantly responds that her colleagues may soon start asking the same difficult questions about the case.

ShockYa (SY): You wrote the script for the new crime film, ‘Wetlands.’ What inspired you to pen the screenplay for the thriller? What was the process of writing the script overall?

Emanuele Della Valle (EDV): The first character of this story is Atlantic City, without a doubt. I’ve been hanging out in the area around Atlantic City for about 15 years now; I go there on holidays over the summer. I’ve always felt that it has this huge cinematic potential that has been largely unexplored. It’s been a long time since a good film has been made in this area, and you have to go back to the ’70s, essentially, to find one.

So my love for the area, as well as my love for noir and crime literature and movies, inspired this film’s initial idea. As a writer, I then started coming up with more detailed ideas. One idea becomes two ideas, and then they really start snowballing.

SY: What kind of research did you do into the lives of police officers like Babs, who are struggling to reclaim their former glory, as well as the residents who live in quaint, tourist-driven cities year-round, to better understanding his motivations, emotions and relationships? How much creative freedom did you take in telling their stories?

EDV: I spent the majority of the fall of 2014 and the winter of ’15 in Atlantic City. I did research with my friends in the police force, as well as my friends who are surfers. That experience was really helpful for me to understand the nuances and subtexts of these worlds.

Almost everything in the movie is fictionalized. But the people who were the technical advisors on the film for the past few years think it’s extremely authentic. To me, that’s a very big complement.

SY: In addition to penning the script, you both made your feature film directorial debut with ‘Wetlands.’ How did working on the script influence the way you approached helming the drama? How would you describe your approach to directing your first movie?

EDV: For me, there was two parts to the direction, which were both very important. One part of directing is the process of working with the crew. I think having enthusiasm and a clear vision about how you want to make the movie, and also being polite to the crew, is very important. The way you treat your crew members is important, because you’re asking them to work six days a week for you. On our film, we were in the middle of the wetlands, where there were 40mph NE winds. So you need to give them the respect that they’re owed.

The second part of directing involves the experience of working with the actors. I think having a climate of openness on set is the most important thing. The actors really need to find the key to their characters themselves. So I think my job as the director is essentially to let spontaneous creativity happen. When those moments happen, magic is made.

SY: Speaking of the actors, the crime thriller features a diverse cast, including Adewale Akinnuoye-Agbaje, Celeste O’Connor, Heather Graham and Jennifer Ehle. What was the casting process like for the film?

EDV: I found a few of the actors myself by going out to Hollywood and meeting with the agencies. The other actors I found through a great casting director, Bess Fifer, in New York. So the casting process was different in each case. I think it’s a great ensemble; there are great performances by everyone, and not just by the actors who have the top billing. Everyone has an incredible quality of acting. I would say the quality of the performances is the number one quality of the movie.

SY: Once the actors were cast, what was the process of collaborating with them on the set? Were you able to have any rehearsal time together, in order to build their characters’ relationships and emotions?

EDV: All of these actors, especially those in the bigger roles, are extremely serious professionals. They joined the project loving the characters and script. They really wanted to do this kind of work.

I managed to have several days of rehearsal before we started shooting. The problem, even with many bigger films, is that you can start with five days of rehearsal, but then something happens, and you’re left with only four days. I had three full days of rehearsal, which isn’t bad for a film of this size, and that helped a lot. We had a table read, and mapped out the more demanding scenes.

SY: Speaking of the drama’s smaller size, what was the experience of making the thriller independently? Did the experience influence the creativity on the set at all?

EDV: It’s a major desire and ambition for a director to have sufficient time. That’s all you need-great actors a professional crew and enough time to work with them. That way, you can encourage the unexpected.

SY: ‘Wetlands’ was shot on location in Atlantic City and the surrounding areas in New Jersey. What was the process of finding, and shooting at, the locations where you wanted to shoot the movie?

EDV: I found 95 percent of the locations myself. I actually wrote the scenes based on specific locations. In most cases, I got the locations I wanted, including specific motels, restaurants and parts of the boardwalk. There were only a few cases that we had to look for other locations. Finding the locations where we’re going to shoot a scene in advance is part of my writing process. Everyone writes differently, but I need to know the geography of the location to write a scene.

SY: Babs’ struggles are not only emotionally gripping, but his life is also brilliantly capture on screen visually. What was the experience of working with ‘Wetlands’ cinematographer, Barry Markowitz, to capture the gritty nature of the troubled protagonist’s life?

EDV: I went to Barry, who’s an amazing cinematographer, with a very specific look and style that I wanted for the movie. That look came from specific photographs from the ’70s, as well as paintings from the ’40s. So I don’t want to say that I made his job easier, but he ended up bringing something amazing to this film. I knew what I wanted, and Barry made it so much better than what I had in mind.

SY: Now that ‘Wetlands’ (has been released), do you have any other projects lined up that you can also discuss? Are you interested in making more films in the crime, thriller and noir genres?

EDV: I don’t want to make the same movie all over again, as I have other stories that I like. Some do have elements of noir, though, as one is a period piece. I like dark stories-there’s no question about it! But I would like to be able to explore whatever subjects that I want, and I don’t want to be boxed into one genre.