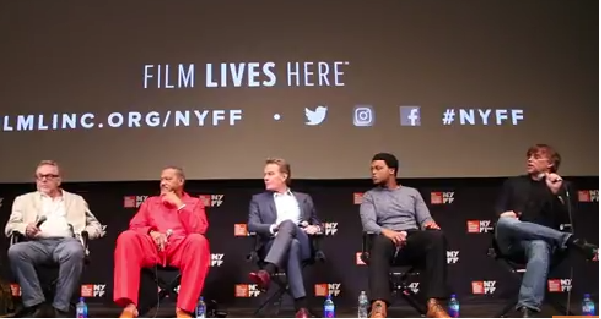 Finding similar comforts while contending with physical and emotional traumatic experiences is one of the best ways for people to bond, no matter how different their backgrounds and lifestyles are overall. That’s certainly the case for the diverse protagonists in the new war film, ‘Last Flag Flying.’ Academy Award-nominated director, Richard Linklater, once again proved that he can naturally and sentimentally highlight the human relationships that form and are sustained during times of despair, which allows the characters to connect while they learn to finally heal, in his movies.

Set in December 2003, ‘Last Flag Flying’ follows three men whom served together in Vietnam. Sal (Bryan Cranston) is a foul-mouthed drinker who now owns and runs a dive bar. Richard (Laurence Fishburne), the most reformed member of the group, is now a long-married reverend who continues to do whatever’s necessary to repress his more liberal and carefree side that ran rampant during the war. Larry (Steve Carell), who’s known as Doc, rounds out the group. He’s a mild Navy clerk who seeks out his former fellow soldiers.

Larry has lost both his wife, who died from breast cancer, and his son, Larry Jr., a Marine who was recently killed in Baghdad. Doc is faced with the task of burying his son, and hopes his his two old military colleagues will assist him in the task. The three haven’t spoken to each other since the war, but Sal and Richard eventually agree to embark on the emotional journey with Larry.

Upon arriving at Dover Air Force Base to retrieve Larry Jr.’s remains, the Navy clerk decides to bring his son’s body home for a civilian burial. Larry Jr.’s close friend, LCpl Charlie Washington (J. Quinton Johnson), agrees to travel with the three older men back to Larry’s hometown for the funeral. Along the way, the reunited friends and their new comrade not only reminisce about their time serving and discuss what it means to be a soldier, but also embrace their future together.

The war drama served as the Opening Night film of the 55th New York Film Festival (NYFF) on Thursday. The screening also doubled as the movie’s World Premiere. Lionsgate is set to theatrically release the Amazon Studios-financed ‘Last Flag Flying’ on November 3.

Linklater, Fishburne, Cranston, Johnson and Ponicsan generously took the time on Thursday before the public screening to participate in a press conference at Lincoln Center’s Walter Reade Theater during NYFF to discuss writing, directing and starring in ‘Last Flag Flying.’ Among other things, the co-scribe, helmer and actors discussed the psychological and physical toll of war, the process of grief and witnessing the 2016 presidential election during the film’s production. Highlights from the press conference are included in the below text, and the interview is presented in its entirety in the above video.

The press conference began with Linklater noting that war “is a powerful thing to depict in cinema; it’s nothing to take lightly. I read Darryl’s book, and thought it was so interesting. I loved how these two wars (the Vietnam and Iraq wars) talk to each other, and echo one another. It’s really about the guys’ reflection” on war, and how it affects them in the long run.” The filmmaker pointed out that “You don’t usually make war movies (that are set) 30 years (after the war ends). They’re always mission-based, and the immediate effects. So this story seemed much more about the long-term effects, and how these guys have changed.”

The movie’s story not only outwardly reflects on the Vietnam and Iraq wars, but also subtly comments on the 2016 U.S. presidential election, as principal photography on the drama began the same month as the appointment of Donald Trump into office. “I remember the next day (after the election), it was very quiet on the set,” Johnson revealed.

Linklater agreed with his actor, and stated that “the next morning, we were filming a scene where we show five flag-draped coffins. There wasn’t anyone in the coffins, but it felt like there was,” the director solemnly admitted. “There’s always an echo of the current political climate” in these types of war films. But he noted that the drama’s story is “set in 2003, long before the politics of today. So that freed us up, politically.

“Our job was to really show the (characters’) politics, which are ambiguous. They’re all different people. So I can’t tell you who voted for which candidate,” Linklater admitted.

Ponicsan then spoke about how he first wrote about the main characters who appear in ‘Last Flag Flying’ in 1969, before they were initially shown on screen in 1973 in ‘The Last Detail.’ “Then so many years later, Thomas Lee Wright, who’s one of the executive producers on this film, urged me to do a sequel,” the writer noted as he explained how the quasi follow-up was initiated. “So I figured out how to do that. Shortly after that, Rick came on board, and he thought the story could be relevant” to today’s political climate.

The writer also revealed that “We started working on the script for this movie in 2005,” to which Linklater added that the current screenplay changed significantly since the first draft. The director added that he thinks it’s more powerful that the film adaptation is being released now, as it offers viewers more retrospect on the events in the story.

The cast and crew also noted that the process of infusing humor into such a dramatic and grief-driven story is also an important element of this type of filmmaking. Cranston noted that he thinks “in any great narrative structure, you’ll have a significant amount of humor to balance content. It not only gives a richer texture to the storytelling, but it also gives the audience a little break from any kind of downbeat. It gives them the chance to breathe, slow down and laugh, and then get back into the journey. It also helps us grieve…people grieve in different ways.”

One of the Emmy Award-winning actors’ favorite moments in ‘Last Flag Flying’ is “on the train. In the scene, Doc, who was crushed with so much depression and pain, found a way to laugh naturally.”

In addition to the need to infuse humor into a dark subject and way of life, one of the other important lessons that’s incorporated into ‘Last Flag Fighting’ is that soldiers are always committed to serving their country, no matter what circumstances they face. Linklater revealed that he thinks “a lot of people who serve in our military can be very patriotic, and love our country. They deeply believe they’re fighting for freedom, democracy and justice, and that’s their mission.” The filmmaker that while there can be a lasting love-hate relationship with it all, overall, fighting for their country is an important part of life for all soldiers.

“I think with age comes wisdom and nostalgia of better times, even if you’re looking through rose-colored glasses,” Cranston noted as he followed his director’s response. “But Quinton’s generation hasn’t had that experience yet; they’re just looking forward. I think that goes back to Darryl’s original script-the balance of generations is something to break through, and Richard did a great job doing that.”

Fishburne followed up on the realities of soldiers by noting that he thinks veterans of all wars are mostly “alike because of their experiences. I had the chance to hos the National Memorial Day Concert with Joe Mantegna in D.C. It’s an event that I’ve participated in three times. It’s like our movie, because it’s about our people who are left behind. We don’t see a lot of war movies about the people who are left behind, and are affected by the deaths of those who served.

“One of the things that happen at the Memorial Concert is this huge celebration. There are all these singers who perform, and actors who tell stories about people who served. The stories are sad, but are told in a ceremonial way, which allows people to grieve and celebrate at the same time, which is what we do in the film,” the Oscar-nominated actor shared. “Everyone at this concert is able to grieve and feel patriotic, and the soldiers’ sacrifices are recognized. Everyone can heal, because everyone in the audience has the same thing in common-someone in their family served. Everyone has the same experience” while watching both the concert and ‘Last Flag Flying.'”