Embarking on the path to find and secure their own true identity outside their family, friends and school and work environments is a constant battle that many people, even as adults, can continue to relate to throughout their lives. The tense transition from adolescence to adulthood has long been highlighted on screen in diverse coming-of-age films, which audiences can long cherish, even after the settings are no longer contemporary. That’s certainly the case with indie darling Greta Gerwig‘s stunning feature film directorial debut, ‘Lady Bird.’ While the title protagonist may initially appear to be an arrogant teen who acts out when she doesn’t get her way, the further viewers delve into her circumstances, the easier they’ll find it to understand and empathize with her emotions and motivations.

Set in 2002-2003, ‘Lady Bird’ follows the title character’s (Saoirse Ronan) final year in high school. Determined to rebel against the rules imposed by her parents, Marion (Laurie Metcalf) and Larry McPherson (Tracy Letts), as well as her Catholic school, Lady Bird swamps out her real name, Christine, for the title moniker. Lady Bird is also particularly determined to distance herself from her mother, who she views to be hypercritical and demeaning.

The high school senior also acts out by embarking on several romantic adventures. She initially sets her sights on her fellow thespian, Danny O’Neill (Lucas Hedges), but that relationship soon fizzles out. So she then forms an interest in too-cool-for-school cynic, Kyle (Timothee Chalamet). Lady Bird must must contend with fleeting moments of awkwardness, pretenses and uncertainties, as she copes with her eagerness to move on from her neighborhood in Sacramento, which she considers to be uncultured.

Even though her mother feels that it would be best for her teenage daughter to attend a local college, partially so that she can improve her grades, as well as their relationship, Lady Bird secretly applies to a school in New York City. In her efforts to overcome her struggles amongst her relatives and peers, as well as with her academics, Lady Bird is determined to find her own way in life, and prove that she can truly make something out of her tense and conflicting circumstances.

Gerwig generously took the time on Friday to participate in a press conference at Lincoln Center’s Walter Reade Theater during the 55th New York Film Festival to discuss writing and directing ‘Lady Bird.’ Highlights from the press conference are included in the below text, and the interview is presented in its entirety in the above video.

During the conference, Gerwig informed the press that “it’s always a little hard to know exactly how long it takes me to write something, because I’m constantly writing. I don’t immediately know what pieces will become something. But what I do know is that I had a draft, a very long draft that was about 350 pages, at the end of December of 2013. So I had that draft for at least a couple years.”

The scribe also admitted that “Some of the scenes didn’t go anywhere. It wasn’t like 350 pages of something that was narratively cohesive. It was 350 pages of stuff that then I kind of looked at, and figured out what felt essential and was the core of the story to me; I don’t really decide what a core of a story is before I write. I write to figure out what the story is,” she revealed.

Gerwig added that “I think that the characters end up talking to you, and telling you what they wanna be doing, and what is important to them. Then in some ways, your job is to listen as much as to write, and to listen to what these characters are telling you.”

The filmmaker also discussed the process of making her feature film directorial debut. “What I’ve always wanted to do is direct, but I didn’t go to proper film school. I went to Barnard College for women, uptown. When I started production on this, I’d been working in film for 10 years, and I’d done sort of every job that I could do,” Gerwig exlained.

“I was lucky enough to act a lot, and be on a lot of great directors’ sets. I’d also written, co-written, held the boom, edited and costumed. So I felt like I was using that in a way to gather my 10,000 hours, or whatever the Malcolm Gladwell requirement is,” the helmer shared.

“When I finished the script, I was like, ‘You’ve always wanted to do this, and you’re not gonna get any more information. You’ve have to go do it now,'” Gerwig shared. “I loved doing it. It was a good, wonderful experience…I think I’m going to keep writing and directing films.”

Once she finished writing the script for ‘Lady Bird’ and went into director mode, Gerwig began casting the film. She divulged that she didn’t immediately have Ronan in mind for the comedy-drama’s title role when she was crafting the story. “But in 2015, I met her at the Toronto Film Festival. She read the script, and really responded to it.”

While at the Canadian festival, “we sat in her hotel room, and she read all of Lady Bird’s lines, and I read everybody else’s lines. I knew within the first two pages that she was Lady Bird and had the part. But I just selfishly wanted to hear it all out loud.

Gerwig also admitted that she thinks Ronan’s “such an incredible actress. I really can’t say enough about her. There was something about the way she (read) it. It was instantly different than how I had heard it in my head, and so much better. It was so much more unique and specific to her.”

The director added that the actress “has a quality of being always emotionally at a 10, which made it that much funnier, because it was all out of a place of sincerity. She never played the joke with quotes around it. She always played it from the inside, and it made everything vivid in way that I’d always hoped for. But you just never know that you’re going to find the exact person who’s gonna be able to capture that, and she just instantly did.”

Another actress that Gerwig praised was Metcalf. “All of the actors in the film, Laurie in particular, are so wonderful. I knew I wanted an actor who could hit a home run that felt exciting, and who felt like a discovery. But to anyone who’s been paying attention, she’s not a new discovery, but it felt like she had this enormous new power, skillset and empathy..I thought I’ve never seen anything like (her performance) unfold in front of me.”

The filmmaker added that “when we were thinking about casting the part, I’d already written the script. As soon as her name came up as a possibility, I thought, yes, she’s a genius. So we talked on the phone…but she didn’t need to spend a lot of time going on about the character or anything like that. She just said, ‘I think that this is something I need to do, and sometimes, things come into your life at the right moment.’..She also said, ‘I currently have a 17-year-old child who’s trying to kill me. So this is exactly what I need to be doing right now.'”

Working with the Emmy and Tony Award-winning actress was an experience that the Golden Globe Award-nominated writer-director also described as “extraordinary. I learned so much from her. Getting to watch her and Saoirse together was like a matchup of two greats. They had different ways of getting into it, but when they were in scenes together, it was like watching two heavy weights.”

Not only does Gerwig connect with the mother-daughter relationship between Lady Bird and Marion, there is a “core of truth that resonates with what I know. I really wanted to make a movie that was a reflection on home, what homes mean and how does leaving home define you. I felt like this story is also a love letter to Sacramento.

“SI feel like, what better way to make a love letter than through somebody who wants to get out, and then realize that they loved it. It felt like it was a movie that was framed around home. You follow this family…and in a way, it’s secretly the mother’s movie, as much as it is Lady Bird’s movie, as that was the core relationship,” the filmmaker pointed out.

“I felt like I wanted that catch, where you realize, this is a love letter to home. It’s also the mother’s story…because I think somebody’s coming of age story is also somebody else’s letting go story. I was just as interested in the letting go as I was of the young people’s stories.” 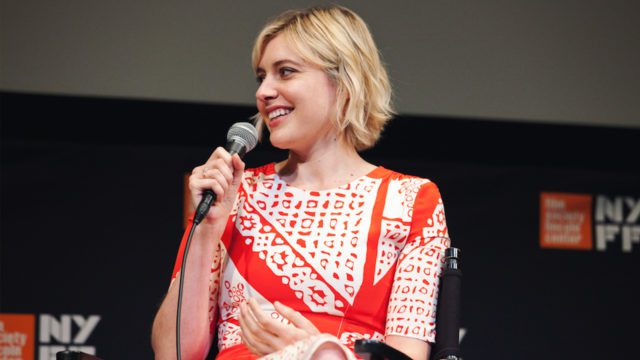