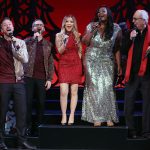 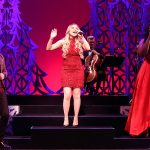 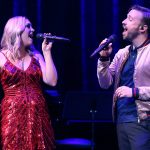 Miracles truly do happen when families believe in the magic and spirit of the holiday season. A new marvel has landed on New York City’s Broadway this Christmas season, as the inaugural production of ‘Home for the Holidays’ is set to officially open tonight at the cheerfully decorated August Wilson Theatre, and will continue through Saturday, December 30. The special, original show, which was stunningly presented this weekend to critics during preview performances, features some of the greatest voices of the current singing generation in Broadway’s newest holiday tradition.

Under the creative direction of Jonathan Tessero and his associate director, Hadley Schnuck, ‘Home for the Holidays’ sentimentally and amusingly highlights such singing sensations as Candice Glover, the winner of ‘American Idol’ Season 12; Josh Kaufman, the winner of ‘The Voice’ Season 6; and Bianca Ryan, the winner of ‘America’s Got Talent’ Season 1. In stunning solo and duet performances, the trio powerfully serenades the audiences with more than 25 beloved Christmas classics, including ‘O Come All Ye Faithful,’ ‘O Holy Night,’ ‘Do You Hear What I Hear?,’ ‘The First Noel, ‘Joy to the World,’ ‘Silver Bells,’ ‘Where Are You Christmas?,’ ‘Little Drummer Boy,’ ‘I Wish It Could Be Christmas Everyday,’ ‘All I Want for Christmas is You’ and ‘Christmas (Baby, Please Come Home).’

‘Home for the Holidays’ is hosted by ‘The Bachelorette’ Season 11 star, Kaitlyn Bristowe, who enthrallingly proves her stage presence and natural talent of bringing people together during times of joy and happiness. Acclaimed singer and Oscar nominated film and theater actor, Danny Aiello, also graced the stage and easily connects with audiences by sharing some of his happiest Christmas memories. His stories include living with his siblings, mother and grandfather when he was a child, and happily receiving his first gift-a pair of boxing gloves-under his family’s first tree. The Broadway concert also features talented YouTube singing sensations, husband and wife duo, Peter and Evynne Hollens, who shine as they croon one of their original compositions.

The music in the limited, six-week engagement, which was coordinated by John Miller, is backed by an enchanting live brass and rhythm band. The musicians include Enrique Sanchez on trumpet; Luke Stafford on tenor sax; Addison Evans on baritone sax; Justin Rothberg on guitar; Winston Roye on bass; Rodney Howard on drums; Justin Jones on percussion; and Jacob Yates on cello. The instrumentalists’ personalities, which are just as distinct as the singers’ charisma and charm, effortlessly match the nature of the songs, whether they’re upbeat and cheerful or sentimental and nostalgic.

The warm and wistful vocals of the performers and the captivating talents of the instrumentalists are also stunningly highlighted by the gorgeous outfits worn by the singers. The cast, whose wardrobes were styled by James Brown III, look extravagant in sparkly costumes that perfectly capture the Christmas spirit. From the distinct red shimmering dresses of varying lengths donned by Ryan, Evynne Hollens and Bristowe, to the glistening silver gown worn by Glover, and the fancy red dress shirt and black dress pants donned by Kaufma and Peter Hollens, the Broadway concert special perfectly captures each singer’s personal fashion style that fits the season.

Broadway’s inaugural production of ‘Home for the Holidays’ is a magical and enchanted set that proves miracles truly do happen when families believe in the magic and spirit of the holiday spirit. New York City’s August Wilson Theatre has successfully launched the newest Holiday concert tradition, which features stunning performances by Glover, Kaufman, Ryan, the Hollens and Aiello.

Backed by an enchanting live brass and rhythm band on a dazzling decorated stage that’s adorned with beautifully decorated Christmas trees, the entire cast ends ‘Home for the Holidays’ with a rousing rendition of NSYNC’s signature original hit single, ‘Merry Christmas, Happy Holidays.’ The show, which is being presented by Chart Breakers Live! and Michael J. Guccione, will undoubtedly become a family tradition that won’t soon be forgotten.