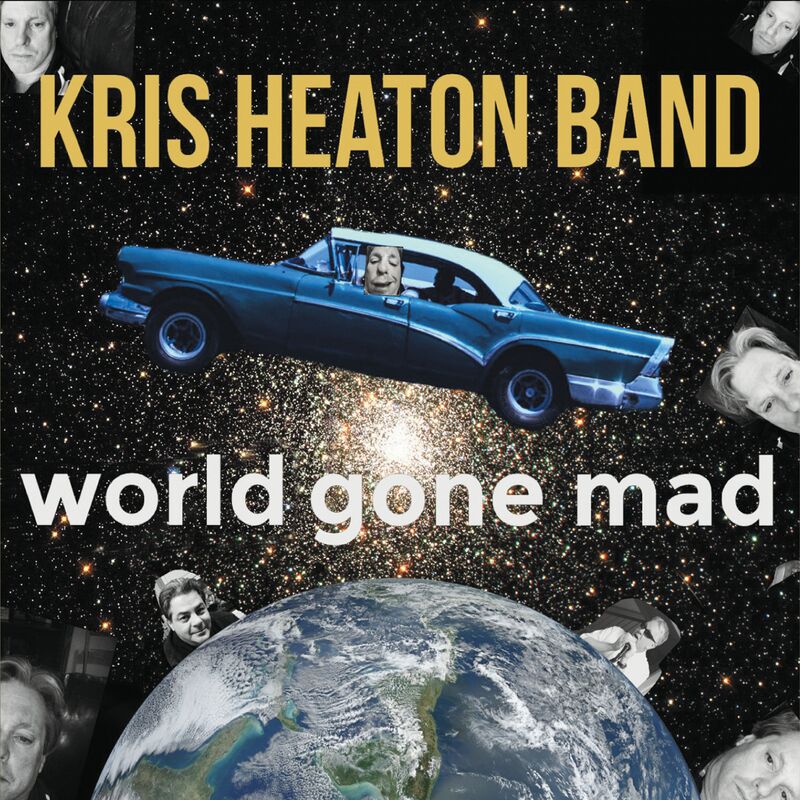 Contemplating how to repair the troubling problems that plague societies around the world can be a challenge for even the most sympathetic leaders who strive to fix humanity. Maintaining the determination to help spark and continue reform can be even more difficult for rock musicians, who have largely garnered the stereotype of being carefree partygoers. But the Connecticut-based group, The Kris Heaton Band, have helped change that long-held idea with its latest blues-pop album, ‘World Gone Mad.’ The rock record features 12 dynamic tracks that highlight Heaton’s extensive travels across America. His interactions have helped teach him that having fun is important in life, but considering and embracing the needs of others is more essential.

The Kris Heaton Band’s latest album begins with the inspirational pop-rock entry, ‘Who Let the Bullets Fly.’ Featuring a catchy chorus with honest and candid lyrics, the song includes a refreshing theme about peace. Despite the somewhat repetitive lyrics, the track includes an overall inspirational message about the importance of overcoming society’s evils. Also driven by a insightful rock melody, solid guitar riffs and Heaton’s raspy vocals, the tune powerfully questions why negative things keep happening in the world, and what can be done to improve humanity.

‘World Gone Mad’ then delves into its title sophomore effort, which continues the musicians’ compelling questioning of what can be done to improve culture around the world. With a deeper lyrical substance about the course society is taking than its predecessor, the entry encourages its listeners to wake up in a world gone mad. Aided by darker ’80s-inspired rock instrumentals, including pulsing guitar riffs and keyboard melodies, the lyrics question why people fight and judge each other, and why no one honors the life they have.

The next song is the nostalgic-driven ‘When We Danced,’ which features rich harmonies. The alternative rock and new wave track features rhythmic guitar riffs that drive the emotional energy of Heaton’s sentiments and commanding harmonies. The singer croons about reminiscing about the better days he shared with the woman he loved, and his determination to recapture that euphoric feeling again.

‘When We Danced’ then transitions into another emotionally-driven entry, ‘Something New.’ While the lyrics in the song are a bit more cliched than its predecessor, the throbbing and electronic pop-rock melody and guitar help redeem The Kris Heaton Band’s captivating social messages and musicality.

The next track on ‘World Gone Mad’ is another intriguing romance driven piece of music, titled ‘I Want You.’ As the next classic ’80s rock-inspired tune on the record, it features refined harmonies and double bass drums that help create an edgy essence. Heaton’s gritty rock vocals effortlessly emphasize how he misses the woman he loves, as he declares that he still needs and wants her for himself.

The Kris Heaton Band’s next entry is the catchy pop-rock song, ‘When the Sun Goes Down.’ Driven by a SoCal soft rock melody and Heaton’s southern-tinged vocals, the singer passionately continues his ode to the woman he loves. The slower tempo instrumentals support the musician’s declaration that she’s still in his dreams, and he longs for the moment when they can reunite.

‘When the Sun Goes Down’ then transitions into ‘Drink to the Girls,’ which highlights the challenging evolution of growing into a mature adult. While Heaton and his fellow musicians maintain their signature new wave-rock-punk vibe throughout the track, the soothing guitars help infuse a more mellow and adult contemporary feeling into the overall production. But the up-tempo vocals help emphasize the singer’s confession that he has fallen in love with a neighborhood girl during his typical coming-of-age period.

The next tune on ‘World Gone Mad’ is the intriguing ‘The Moment,’ which chronicles the experience of living in the moment. Backed by an interesting blend of ska and reggae instrumentals, Heaton declares that he wants to make special memories now.

Heaton and his bandmates then delve into ‘One Thin Line,’ which features a slower tempo than the album’s previous entries, as it focuses on personal tragedy. The moody southern rock song features sentimental and slower-paced vocals and instrumentals, which chronicle the experience of walking the thin line between positive and negative lifestyles. The singer also contemplates how he can be in touch with his feelings and improve his life during the shorter track, which will surely stick with its listeners.

‘One Thin Line’ then transitions into the rock-driven tune, ‘Where the Wind Blows.’ Heaton’s voice, which is a bit more stiff and strained at times, is supported by more spirited and up-tempo drum beats, as he declares that he’ll go wherever life leads him.

‘World Gone Mad’ then delves into the more emotionally tamed entry, ‘Way of the World,’ which combines industrial hip hop elements with an evocative rock and roll component. Heaton emotionally notes how the world is full of sin through his distorted vocals, and contemplates why there are problems in all societies.

‘World Gone Mad’ dynamically ends with a heartfelt ballad that’s titled ‘Better World,’ and wraps up the album with a positive tone. The slow, laid-back and raw song features gritty vocals and soulful drums that highlight Heaton’s empathy towards the problems the other people in his life are facing, as he declares that he has faith that they will improve.

Pondering how to fix the troubling problems that disturb societies around the world can be a challenge for even the most sympathetic leaders who strive to fix humanity. Maintaining the determination to help spark and continue reform can be even more difficult for rock musicians, who have largely garnered the stereotype of being carefree partygoers. But The Kris Heaton Band, has helped change that long-held idea with ‘World Gone Mad.’ The rock-pop record highlights Heaton’s extensive travels across America, which helped teach him that having fun is important in life, but considering the needs of others is ultimately more important.