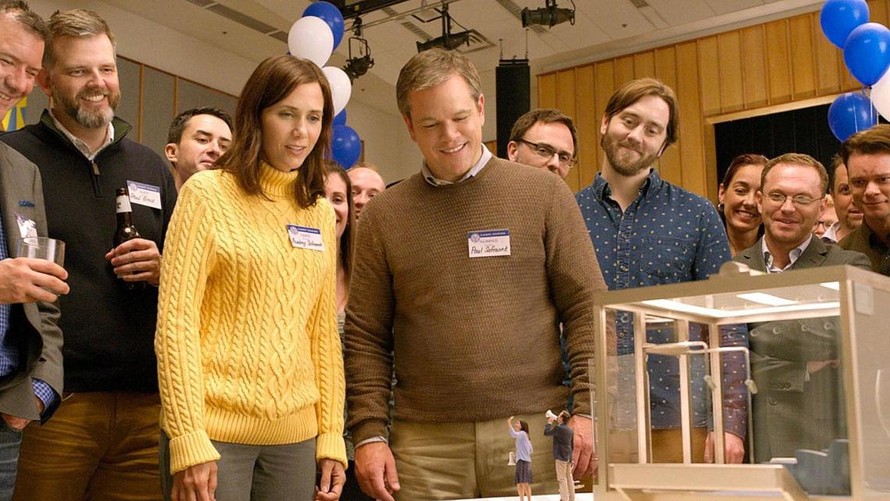 Photo of Matt Damon in the film Downsizing.

With enough people today struggling to make a living as jobs go overseas and to robots, there’s gotta be a better way to live comfortably, maybe even luxuriously, than we have now. Along comes a scientist who provides the answer. He is the first guy to have the solution. Just think: you can have an apartment the size of the kind inhabited by lower-middle class residents of Tokyo and yet have an illusion of luxury by cutting yourself down to size. To get an idea of how this would work, think of the common housefly or even a flea. To him (or her), a bread crumb that is so small that you can barely notice it on the sink is like a four course meal to our flying friend. You got it: if you can shrink yourself from six feet tall to just five inches, the Big Mac that you can wolf down and still feel hungry can last you for a week. And talk about luxury! A diamond ring for your gal that would have cost you $15,000 can now be bought for $83, meaning a stone that looks to a five-incher the way the full-size one appears. She will love you forever. Shrinking bank account? No problem. Take your life’s savings of $50,000 to a special place and you can retire with it for twenty years. There’s a catch, though. You have to submit to surgery—get all your hair shaved because when you’re five inches high you’d be submerged as though in a Costa Rican rainforest. Then you’d have to give up your friends and find new ones in that special area. But if you have no money, if you’re in debt, you will still be poor in this area called Leisureland.

Alexander Payne, whose “Nebraska” is his best picture, writes what he knows at least geographically. He situates the characters in Omaha, where Paul Safranek (Matt Damon) is an occupational therapist for the guys in a meat-packing plant. He has just paid off a student loan when he and his wife Audrey (Kristeen Wiig) are entranced by a lecture from a Dr. Jorgan Asbjørnsen (Rolf Lassgard), who, having succeeded in experiments with mice has found a procedure to shrink volunteers down to five inches high. They decide to go through with the deal, get surgery all the while thinking of the good life that will be there’s with other small people, when Audrey gets cold feet and backs out after her husband has been transformed. Making new friends in Leisureland, Paul runs into some party people, particularly the aging duo Dusan Mirkovic (Christoph Waltz) and Konrad (Udo Kier), both intent on making even more riches by smuggling enough tobacco to make cigars for the multitudes and other luxury items as well.

The most interesting new friend is Ngoc Lan Tran (Hong Chau), a Vietnamese who lost a leg in a Southeast Asian prison, and has escaped—now devoting her life not to the attainment of material goods but to providing for a host of other poor people. With her pigeon English she makes friends with Paul, who later will fall in love with her while at the same time thinking that he could be part of another experiment: by following the Norwegian cult leader into some sort of Middle Earth-type environs, he could be a part of something great, which is to start a new race of homo sapiens after our planet dies in the same way that our ancestors 200,000 years ago became the nucleus of our present billions.

The film is long at 136 minutes, but not overlong by the standards of movies competing for end-year awards. During that time we are treated to more than one film, or at least it looks like that. First we have superficial comedy, watching jokes made by the big guys either against or in favor of the experiment. One fellow in particular, a bartender, complains that the small people would not be part of the economy, would therefore not pay taxes, and therefore be a burden to people like him. There’s always another way to look at what at first looks like the ideal solution. As the story heads toward a conclusion, Payne gets real serious, giving the word that our planet, because of overpopulation, cannot afford enough food for everybody, and come nuclear winter, it’s all over after two million years of human habitation.

Matt Damon has been hot for a while. Every kid must have seen his blockbuster fare like “Jason Bourne” and “Intersteller.” Here, puffed off to represent a resident of Middle America (e.g. a Nebraskan), he is sucker bait for the experiment to cut him down to size. But is Payne telling us that proclamations like “I am going to help solve our environmental problems by agreeing to be shrunk” are hypocrisy? After all, many people will proclaim how liberal they are looking for solutions to the big problems but this is just a rationalization for accumulating more—here, ironically by being less. Is that it? Are liberals like the characters in a better movie like “Get Out” and “Guess Who’s Coming to Dinner,” who profess their love of everybody, black, white or polka dot, but who are as phony as our present U.S. cabinet?

Generally, though, the movie is disappointing because it presents its lead characters as mere spokespersons for beliefs rather than real human beings. By doing so, Payne fails to connect emotionally to his audience (my personal view, anyway), and if you don’t connect, you also forget about making an impression. The only character who is real and who tries mightily to save the movie is Ngoc Lan Tran, who as a dissident went to Vietnamese prison and is now serving the not-well-off with little thought about her own material well-being. Everything is appropriately in place from costumes and production values to photography and music in the soundtrack. But these virtues do not succeed in following the advice of E.M Forster, “Only connect.”