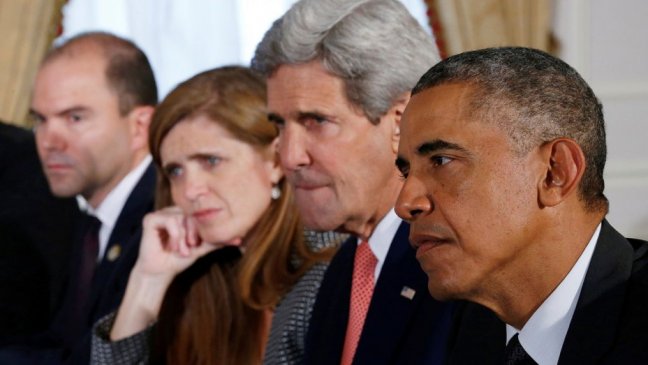 Barack Obama in the Final Year.

The choice made by Greg Baker, who handles the direction of “The Final Year,” to end this film with the Bob Dylan song “The Times They Are a Changing” is strange. Baker is clearly a fan of the Obama administration and heartbroken at the dramatic upset made by the Republicans in the last presidential election. Now what Dylan is saying is a progressive message: our country has been moving leftward since its inception. Yet the election showed an America in changing times that make Dylan’s plea ironic; fearful of progressive upticks; of strides made by minorities, women and gays in particular. This is an America heading back in time, a reactionary idea that would have us trashing the gains of Obamacare, the environment, climate research, all as though it were simply an attempt to get back at our forty-fourth president.

Sometimes the pendulum swings back before it can move forward again. As you watch Barack Obama, noting his lean build, his empathetic demeanor, his law school professorial speech, you can’t help comparing him most favorably to the current leader, who boasts and lies with all the rationality of a drunken sailor as he strides about like a colossus, his paunch leading the way. If you can’t shed a tear by the time the movie concludes—when you see Obama’s senior staff pulling down the framed certificates on the walls and filling cardboard boxes with the items they can’t bear leaving, you probably pulled the lever for Trump.

Teary emotions notwithstanding, Baker’s doc gives the viewer a look at four powerful people during their final year in Washington, listening to their views when talking to the camera or to the people whose paths they cross. You see John Kerry, a secretary of state largely responsible for a solid treaty with Iran, but we do not see him as we see Téa Leoni in the role of Madam Secretary, lovey-dovey with her important husband and her three children and walking about the neighborhood seemingly unaccompanied by the secret service. You watch Samantha Power, who served our country as U.N. ambassador but whose miles around the world make her look like a secretary of state. Ben Rhodes, then our national security adviser doubling as speechwriter, appears ironically (for a speechwriter) unable to let out a single sentence as the camera finds him in shock just after the announcement of a Trump victory. Of course President Obama, who won two terms of office and had stated that he could have beaten Trump, is the hero of any true-blooded American patriot who believes that we should strive for a world dedicated to peace, and not one who believes we should turn the clock back to 1920 or 1890 or take-a-guess, when we did not have to worry about pollution or climate change or how to pay the medical bills pre-health-sector technology that has raised the ante on costs.

Relatively little time is spent in the Oval Office by Martina Radwan and Erich Roland’s cameras. Instead we go to Cameroon, Austria, Chad, Greenland, Laos, Vietnam, Hiroshima, and Nigeria and to archival films on Syria at war. We observe an empathetic Powers console Nigerian women whose daughters have been kidnapped by the Boko Haram. We see John Kerry negotiating with a smiling counterpart in Iran. We watch as Ambassador Power takes down the Russian Federation at the U.N. for Russia’s role in Syria.

Voters for the Democratic party, 2.5 million people more than those voting for the GOP, can take heart by Power’s concluding view that “The idea that we could go gently into the night…has been vanquished.” We may have to wait twelve months for a change in Congress and twice as long to cast our ballot for a read leader in the White House as opposed to the current fake, but hope breathes eternal in the human breast.