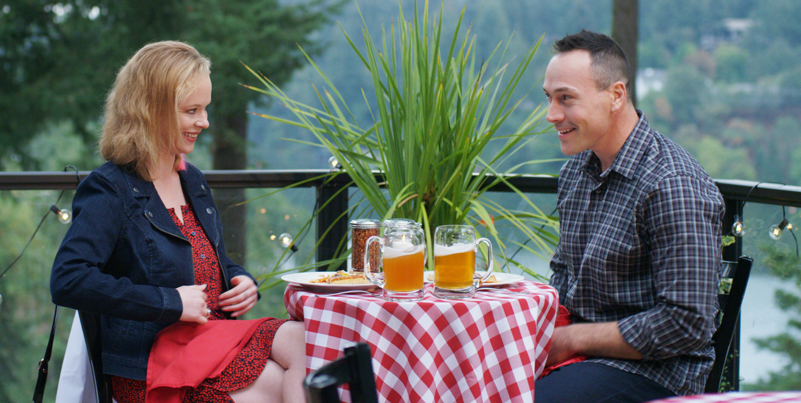 Contending with several bad experiences within a certain area of live can often times lead many people to shy away from willingly experiment within that field again. That’s certainly the case for actress Thora Birch’s protagonist in the upcoming quirky romantic comedy, ‘The Competition,’ which shows her enthusiastically denouncing serious romantic commitments. But the character has a true change of heart about embracing romance when she forms a true connection with the latest man she meets, following a string of failed relationships.

The film was written by Kelsey Tucker, who also stars in a supporting role. ‘The Competition,’ which puts a modern, technology-driven spin on the romcom genre, was directed by Harvey Lowry. The duo, along with Birch, also serve as producers on the movie, which is set to be released in select theaters and On Demand on Friday, January 26 by Gravitas Ventures.

‘The Competition’ follows Lauren (Birch), who realizes that she’s had one too many bad boyfriends. So she becomes the voice of a generation when she launches a blog promoting The Pig Theory, which insists that people can enjoy all that romance has to offer, but only for six months. At this “Point of Infidelity and Guilt,” people must break up before their mate becomes unfaithful. She feels that the theory is incredibly accurate, since she also works as a scientist who creates formulas for companies that highlights how their products can easily find success.

Lauren is a beacon of light for her followers, but her lawyer sister, Gena (Claire Coffee), is concerned. After she decides to fight her case on why Lauren should stop promoting her theory and blog, Gena decides to introduce her sister to her co-worker, Calvin (Chris Klein). Gena feels that Calvin is the perfect man for Lauren, and the duo does immediately hit it off.

Calvin also hopes that their strong connection will convince Lauren to reconsider her idea about the doom of relationships. The two decide to start a competition, in which Calvin will pick five friends who have been in a relationship for longer than six months. Lauren will then pick the enchantress who will be their potential downfall. If three out of the five men cheat, Calvin must walk away from their relationship. But if three out of the five resist temptation, Lauren must shut down her blog, and open her heart to Calvin. Calvin’s friends will be the challengers who determine his destiny with Lauren.

Birch generously took the time recently to talk about starring in, as well as producing, ‘The Competition’ during an exclusive phone interview. Among other things, the actress-producer discussed that when Tucker approached her with with the opportunity to star in, and produce, the film, she accepted, because she feels that Lauren’s stance on romance is intriguing and true-to-life. Birch also embraced the easy and relaxed banter that naturally formed on the set, which captured the instinctive chemistry that arose between the cast and crew, but the vibe also stayed true to Tucker’s vision for Lauren and Calvin’s story.

The conversation with Birch began with her explaining what it was about the character of Lauren, as well as the overall project, that convinced you to take on the role. “About three years ago, I was approached by Kelsey Tucker, who’s the producer and writer, and she’s in the film, as well. She told me about this romantic comedy that’s a throw-back to the romantic comedies of the ’90s that we all grew up loving as teen girls,” the film’s lead performer shared. “The premise was intriguing to me, because it takes a fresh outlook on something that we all say to ourselves, which is that everybody cheats. So this story is a light take on that premise.”

Birch added that making ‘The Competition’ was “a team effort. It was a bit of an experimental process, in the sense that Kelsey woke up one day and decided that she was going to make a movie,” the actress revealed with a laugh. “I loved that attitude. So she just started the process. We made the movie independently in beautiful Portland, Oregon, near Lake Oswego, which is a gorgeous community. It was really fun.”

The performer also admitted with amusement that “Lauren is kind of a disheveled mess. She’s a blogger when she’s not working on her formulas, because she’s a type of scientist who works on product development. She writes this blog on the side, because she’s convinced that the only way to protect one’s heart is to break up with someone after six months of dating, before they have the chance to cheat on you.”

Birch added that her character feels that she’s genuinely happy. “But at the end of the day, the movie speaks about trying to find that real love. Lauren’s convinced that it probably doesn’t exist, and if it does, it’s a little bit of a fantasy and a lie, so it’s better to not to even look for it. But then she’s challenged.” The actress also divulged that when she received the script for ‘The Competition,’ “I was feeling that way a bit myself, and that the “Big Love” might not really be a thing. So it was fun to play around with that idea.”

When Klein was also cast in the comedy, Birch felt “that was a great day, because I’ve known him for awhile, but we’ve never had the chance to work together. He’s a sweet, super-fun and easy-going guy to work with.” She added that while they didn’t have much time to rehearse together, her main co-star “had a lot of great ideas. He was passionate about keeping (Calvin) as a laid-back kind of guy, who would be the type of person that Lauren would respond to. Chris is really fun to work with.”

Birch, Klein and the rest of the movie’s cast was given the chance to improvise some of their characters’ comedy on the set while they were filming. “We definitely took the opportunity to be playful, and riff a little bit. But Kelsey was a little particular about the style and tone of the story, so we did respect that,” the actress shared. “But it was a team effort, and everyone offered their input, and really tried to play up the comedic elements. We had a fun feeling on the set, but we had a blueprint that Kelsey wanted us to stick to, and we had to respect that.”

Further speaking of working on Lauren’s character development, Birch explained what the experience was like. “I think at first, I might have been lost in the woods as I was trying to find Lauren’s core. But at the end of the day, I felt that she was somebody whose biggest fear in life was her own vulnerability. I can definitely relate to that, especially when it comes to romantic relationships. I definitely felt that that was a through line in the script, and latched onto that,” the performer admitted.

“Lauren is rough around the edges, and is a hot mess, in a way, but not in her personality,” Birch further confided with a laugh. “She very much has a Type A personality, but it doesn’t carry over into other areas of her life.”

In addition to working with Tucker, Klein and the rest of the cast, Birch also shared what the experience of collaborating with Lowry as ‘The Competition’s director and her fellow producer. “Harvey definitely brought a different perspective to the story, as this was very much a female-driven production, between myself, Kelsey, Jasmine Fontes, our other producer, and much of the crew. I think Harvey’s style and tone matched that of Calvin, the character, in the sense that he’s a little bit more relaxed, easy-going and open-minded. He also brought a grounded, paternal outlook to it, which very much contrasted all the things we were working with. So I think that helped create a nice balance to the set,” the actress shared.

Birch then followed up on the experience of also serving as one of the producers on ‘The Competition,’ in addition to playing the lead character. ‘The Competition’ is the second film she has produced, after the 2012 romantic comedy-drama, ‘Petunia.’ The upcoming movie “is slightly more experimental than ‘Petunia,’ which is family drama that’s mixed with dark comedy.

“The thing about ‘The Competition’ is that Lake Oswego, like Portland, is another character in the film, so we wanted to really highlight that. The crew and the community there were so welcoming and helpful. It was like working with a group of friends, or extended family, because they were a tight, fast-moving unit. We shot inside Kelsey’s home and a friend’s restaurant. So we didn’t film guerilla-style, but it was guerilla adjacent,” the producer revealed with a laugh.

Like Birch mentioned, ‘The Competition’ was shot on location in Oregon, which was an experience that she really enjoyed. “Just the fact of knowing that we were going to be shooting in Portland was one of the project’s selling points for me,” she admitted with a laugh. “I’ve worked in Oregon before, and I love the state. I also love Portland and the people there. Getting the chance to hang out there in late summer into early autumn was a joyous experience.”

Birch added that there were times to wear her producing hat, and times to wear her acting hate. “I think when we were actually filming, I was focused more on the mode of trying, like I mentioned before, to develop that through line for Lauren. I was focused on developing her as a character. The producing hat came on before, and after, that process of acting. I had a lot of conversations with different people about a whole list of other things” besides developing the protagonist that needed to be done in order to get the movie made.

Further speaking of the way audiences view movies, with ‘The Competition’ being set to be released in theaters, as well as On Demand, as an actress and producer, Birch shared that she thinks the VOD platform is beneficial for an independent movie like this one. She used to be “an avid theater-goer, but not anymore! I’m not always running out the cineplex anymore. I like my streaming and On Demand, and I feel like that’s not an uncommon opinion now. So there’s a lot of opportunity to see a lot of movies that way, because the content pool is so wide open.”

Now that ‘The Competition’ is being distributed this month, the actress is starting to focus on also promoting several other of her upcoming films, including director Phillip Noyce’s action crime thriller, ‘Above Suspicion.’ Birch stars in a supporting role, alongside ‘Game of Thrones’ star, Emilia Clarke, in the drama. Birch can also be seen in director Eric Bross’ independent political thriller, ‘Public Affairs,’ which she believes will be released within the next couple of months. She added that “There’s also ‘The Etruscan Smile,’ on which I got to work with the fabulous Brian Cox, who’s an amazing legend. So it’s a great time right now to watch these films reach their audiences!” 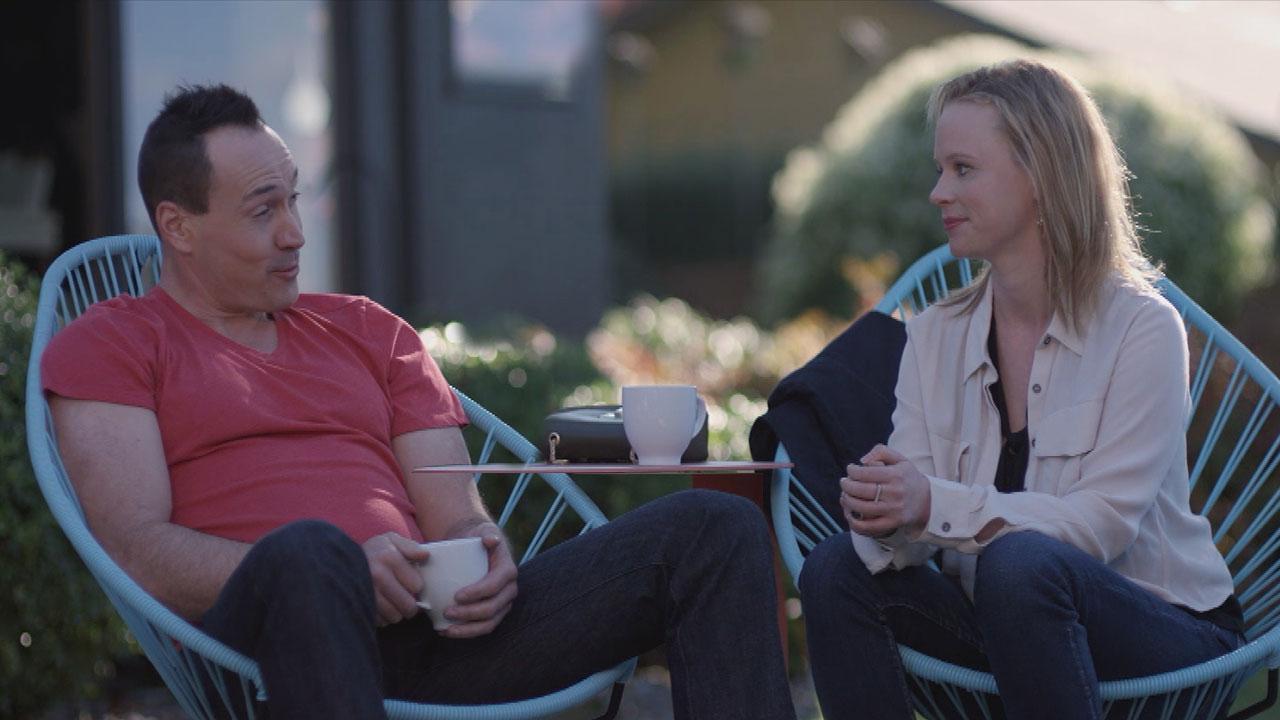 Photo of Thora Birch The Competition