Making a powerful and reflective statement about the present state of adolescence has long been a compelling movement in American cinema. But rarely has that declaration been so raunchily made about friendship between female teens by an up-and-coming female filmmaker like it has with the new drama, ‘Never Goin’ Back.’ The movie, which marks the feature film writing, directorial and editing debuts of actress Augustine Frizzell, proves that the increasingly chaotic lifestyles of the teen girl protagonists keeps getting in the way of their seemingly relaxed plans. The drama intriguingly explores the not-often-seen racy aspects of adolescent teen girl characters that are so regularly showcased in narratives that are driven by their male counterparts.

‘Never Goin’ Back’ follows best friends and high school dropouts, 16-year-olds Angela (Maia Mitchell) and Jessie (Cami Morrone), who are both working dead-end waitressing jobs in their local diner. Their dream vacation to sunny Galveston, Texas, is only a few shifts away. But their planned trip is put into jeopardy after a drug deal goes bad, and their home is invaded and robbed, which leads them to serve a short stint in juvenile detention.

The duo’s also struggling to survive because they’re about to get fired from their jobs, and they don’t have money to pay their rent. So they’ll have to use every bit of guile their perpetually buzzed teenage brains can muster, in an attempt to quickly raise money to survive. As a result, they embark on a day of adventure that includes drugs, alcohol and an ill-advised heist.

Frizzell’s unique perspective on female adolescence was shared with audiences when ‘Never Goin’ Back’ held its World Premiere during the Midnighter program at this year’s Sundance Film Festival in Park City, Utah. The day after the movie had its premiere at the festival, the writer-director-editor was joined by Mitchell and Morrone at the Grey Goose Blue Door lounge, and sat down for an exclusive interview. Among other things, the trio discussed how they were excited to be able to premiere the drama at a prestigious festival like Sundance.

ShockYa (SY): Augustine, you wrote the script for the drama, ‘Never Goin’ Back.’ Where did you come up with the idea for the film? What was the process of penning the screenplay for the movie?

Augustine Frizzell (AF): I wrote a rough draft of the script in 2010. Then in 2014, I very quickly wrote a full version of the movie, and we then shot it. It was very rushed, and it wasn’t exactly what I wanted. After shooting and editing it, I didn’t think it turned out as good as it should have been. So I trashed the movie, and gave it a few months. I then restarted the script, and spent a bout a year-and-a-half doing rewrites and taking feedback. Then in early 2017, I finished another draft, and knew it was done. That’s the movie we made.

SY: Maia and Cami, you play Angela and Jessie in ‘Never Goin’ Back.’ What was it about the characters that convinced you to take on the roles?

Maia Mitchell (MM): Well, I read a lot of scripts about young women, obviously, and this one really stood out to me. I was drawn to the fact that young women were messing up and figuring out who they are, without a level of angst and moodiness to it. I was cracking up the entire time I was reading the script.

I also liked that the friendship between the girls is so strong throughout the whole film. There’s not really a point where it’s tested at all. I had a best friend growing up, and we had that kind of friendship. I feel like I haven’t seen that strong of a female connection on screen, particularly between young women. So that felt really important, and was something that I wanted to be a part of.

Also, the character of Angela is so wild, and there’s not a self-conscious bone in her body. I’m not like that myself, so it was a challenge to play that side of her. I was able to live vicariously through her, which was fun. (laughs) What about you, Cami?

Cami Morrone (CM): Well, similar to what you said, Maia, I was drawn to this comedy that’s allowing women to take risks, and be a little out there. This movie’s bold in its dialogue and in certain scenes. Maia and I have some exposing and vulnerable moments that are raw. It took some courage to attack scenes like that. But I thought Maia killed those scenes. We both faced some challenges in the script, which made us want to star in the movie even more.

SY: Speaking of those bold and vulnerable moments, were there any scenes that were improvised on the set that made it into the final version of the film, in order to show the truly emotional points between Jessie and Angela?

AF: I definitely encouraged them to improv. Everything was definitely set up in the script, but I wanted everything to feel as true to them and the characterizations that they had been working on as possible.

MM: We had a long rehearsal process, and we managed to go through every scene before we started shooting. That’s so rare, and such a lucky thing for us to be able to do. We were able to discuss everything in depth, and that process allowed us to become comfortable with the material by the time we got to the set. So we had a definite rhythm to everything by the time we began shooting.

SY: Augustine, in addition to writing the script, you also directed the film. How did working on the screenplay influence your helming approach on the set?

AF: I think the script was so structured in a way that I felt very safe going in. That allowed me to give the actors the freedom to do what they wanted to do. We had everything structured, so I felt comfortable giving that leeway to the actors.

SY: Besides Cami and Maia, the drama also stars such actors as Matthew Holcomb, Joel Allen and Kyle Mooney. Augustine, what was the casting process like for the movie?

AF: With some of the actors in the movie, including the guys who plays Ryan (Matthew Holcomb) and Dustin (Joel Allen), they were in the first version of the film that I mentioned earlier. I knew that I wanted them back for this version. But I had to have them audition again, because the process was a little different, and I had to make sure they were still right for the roles. They obviously nailed it again.

Then for all of the side actors, we found them locally in Dallas, where we filmed, through casting calls. With Kyle Mooney (who plays Brandon), one of my good friends shares a manager with him. So I wrote to my friend and asked, ‘Can you get me in touch with your manager? I want to offer this part to Kyle. I’m a huge fan of his work.’ So I wrote to his manager immediately after that, and his manager immediately wrote back to me. I then sent him the script, and he passed it to Kyle. Kyle then said yes, which was very lucky for me. (laughs) I was so grateful to have him.

‘Never Goin’ Back’ was shot on location in Ft. Worth and Dallas, Texas, like you just mentioned, Augustine. What were your experiences, as the actresses and director, of shooting on location in Texas?

CM: I think the easier the circumstances can be around you, the easier it is for you as an actress to get into character, and that was certainly the case with filming in Texas. The house we were in was a real home, and not a set.

MM: There also weren’t any trailers!

CM: Yes, there weren’t trailers, which helped us become close as a cast. There were also only one working bathroom for the whole cast and crew…

MM: …No, there were two bathrooms! We were also sweating on each other! (laughs)

CM: Yes, we were sweating on each other, and we were all in this real dirt all of the time! It was also really hot and sticky.

AF: There were also a lot of mosquitoes!

CM: That all took the element of having to fake everything away.

MM: It also helped us with our accents.

CM: You said that you got an accent, but I didn’t get one! (laughs)

MM: Why were we accent neutral?

Augustine, in addition to writing and directing the film, you also served as the co-editor with Courtney Ware. Why did you decide to also edit the movie?

AF: I love editing, so I intended from the start to do the edit by myself, for the most part. So my co-editor, Courtney Ware, was going to be on the set, and compile footage, sync sound and do a compilation cut. We weren’t sure if we were going to still work together once that process was done.

But that was such a good experience, and she was so intuitive. She really worked well with the feedback that I gave her to find the tone. Once the rough compilation was done, it just naturally went into a place where we worked on the edit together.

SY: ‘Never Goin’ Back’ had its World Premiere during the Midnight Section of the Sundance Film Festival. What has the experience of bringing the movie to the festival? How have audiences reacted to the movie?

MM: It’s been very exciting. Obviously, bringing the movie here was the goal. (laughs) We were talking about bringing the movie here to Sundance while we were filming in the sweltering heat in Dallas, and now we’re talking about the process of making it as we’re here in the snow! It’s very surreal, exciting and well-deserved for Augustine and everyone. 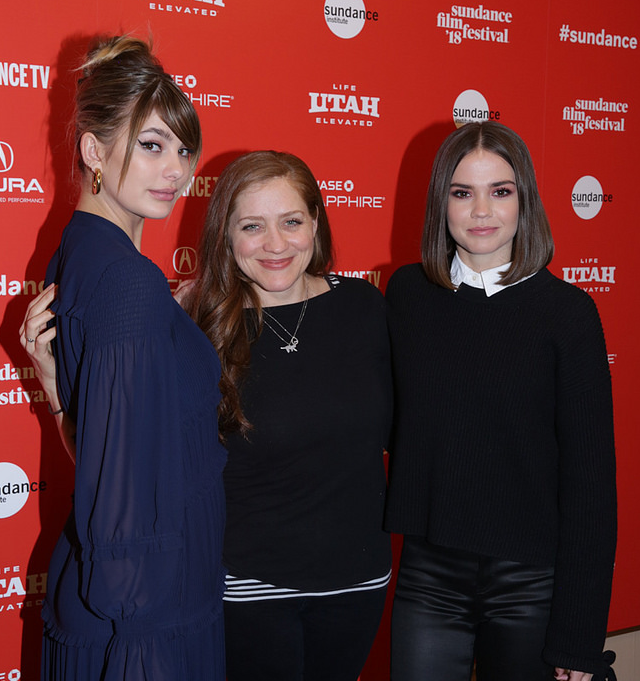